4 Ways to Maximize Twitter Engagement with TV Audience. It’s that time of year when kids go back to school, football is starting, baseball is ending, Mr. 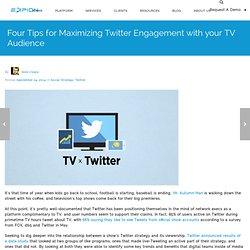 Autumn Man is walking down the street with his coffee, and television’s top shows come back for their big premieres. At this point, it’s pretty well-documented that Twitter has been positioning themselves in the mind of network execs as a platform complimentary to TV, and user numbers seem to support their claims. In fact, 85% of users active on Twitter during primetime TV hours tweet about TV, with 66% saying they like to see Tweets from official show accounts according to a survey from FOX, db5 and Twitter in May.

Seeking to dig deeper into the relationship between a show’s Twitter strategy and its viewership, Twitter announced results of a data study that looked at two groups of like programs, ones that made live-Tweeting an active part of their strategy, and ones that did not. Live-Tweeting lifts Twitter conversation Live-Tweeting lifts follower growth rate. Brazil-Chile Becomes Most Tweeted Sporting Event Ever. The FIFA World Cup has just reached the knockout stages. 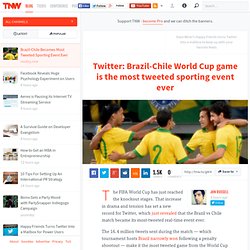 That increase in drama and tension has set a new record for Twitter, which just revealed that the Brazil vs Chile match became its most-tweeted real-time event ever. The 16.4 million tweets sent during the match — which tournament hosts Brazil narrowly won following a penalty shootout — make it the most tweeted game from the World Cup so far. 'Happy Valley' Is a Huge, Trending TV Hit That You Can’t Watch. There’s no doubt that the modern British crime drama is booming, but we didn’t see this one coming at all: Happy Valley, the grim, six-episode kidnap thriller whose finale was broadcast Tuesday night in the UK, has been so instantly and wildly popular that the hashtag #HappyValley was the no. 1 global trending topic on Twitter. 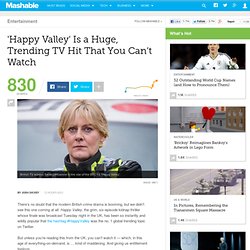 But unless you’re reading this from the UK, you can’t watch it — which, in this age of everything-on-demand, is … kind of maddening. And giving us entitlement feelings. Mashable. Cosmos' latest episode, "The Electric Boy," blends science with an aspirational tale by focusing on the man who figured out how to turn electrical currents into mechanical motion: Michael Farraday. 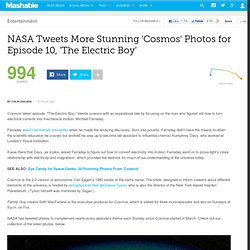 Farraday wasn't technically a scientist when he made the amazing discovery. Born into poverty, Farraday didn't have the means to attain the scientific education he craved, but worked his way up to become lab assistant to influential chemist Humphrey Davy, who worked at London's Royal Institution. Mashable. Mashable. Twitter-Nielsen TV Ratings Headed to Australia. How to Use Facebook Website Custom Audiences. Are Facebook ads a core part of your social media tactics? 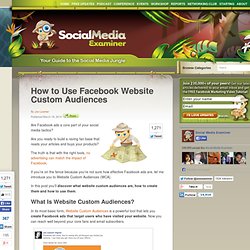 Are you ready to build a raving fan base that reads your articles and buys your products? The truth is that with the right tools, no advertising can match the impact of Facebook. If you’re on the fence because you’re not sure how effective Facebook ads are, let me introduce you to Website Custom Audiences (WCA). In this post you’ll discover what website custom audiences are, how to create them and how to use them.

What Is Website Custom Audiences? In its most basic form, Website Custom Audiences is a powerful tool that lets you create Facebook ads that target users who have visited your website. Catch the attention of recent website visitors with a relevant ad about your product or service. WCA may sound quite a bit like Facebook Exchange (FBX), another way to retarget users on Facebook who visited your website. The special thing about a WCA is that it’s created and used within ads run through Power Editor or the self-serve ad tool. Bye Bye Second Screen? The InAIR Lets You Browse The Web And Watch TV All In One Place.

Nowadays, many people browse the web at the same time that they’re watching TV — the phenomenon is called the “second screen.” 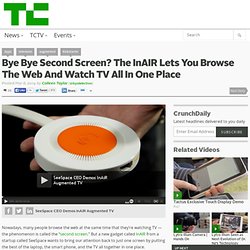 But a new gadget called InAIR from a startup called SeeSpace wants to bring our attention back to just one screen by putting the best of the laptop, the smart phone, and the TV all together in one place. InAIR, which is set to cost $99, works by plugging directly into any television through its “smart” HDMI cable that then connects to a set top box. The device then pulls data from the currently playing television program or movie, parses it using natural language processing and other patented technologies, and presents related content pulled directly from the web and social media on the television screen. The user interacts with the InAIR by using a simple mobile app, or through gesture control by incorporating the Microsoft Kinect — giving the possibility for the Minority Report experience to come to life. 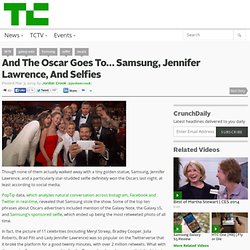 PopTip data, which analyzes natural conversation across Instagram, Facebook and Twitter in real-time, revealed that Samsung stole the show. Ellen DeGeneres's Oscars Selfie Tweet Becomes Most Retweeted Ever. New Twitter card lets you vote for your Oscar favorites. Twitter added a new type of card to its growing platform overnight that allows users to vote on their favorite nominees, just in time for the Oscars award ceremony next week. 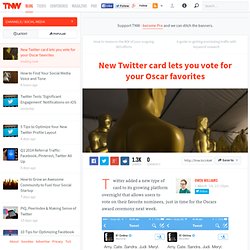 Dick Costolo, Twitter’s CEO showed off the new card which is being used by E! Online to get votes on which female actress users are predicting to win Best Female Actress at the awards on Monday. The new survey card only works on mobile and doesn’t appear using the web interface yet. Livefyre pushes the limits of its technology with Oscars red carpet photo booth that tweets for fans. The Academy Awards’ #MyOscarPhoto campaign, powered by Livefyre and Twitter, offers a good look at the power of Livefyre’s platform and its ability to use technology and social media to connect fans with their favorite celebrities. 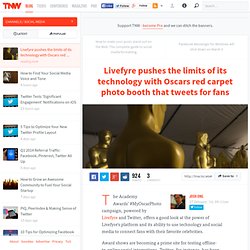 Google and Facebook Partner with American Idol. NBC Resurrects 'Heroes' For a 2015 Comeback With Big Digital Tie-In. NBC is reviving Heroes, Tim Kring's popular sci-fi TV drama about people with superhuman abilities, as a miniseries in 2015. 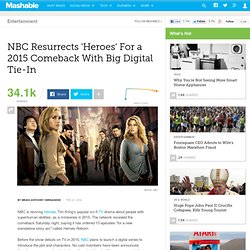 The network revealed the comeback Saturday night, saying it has ordered 13 episodes "for a new standalone story arc" called Heroes Reborn. Before the show debuts on TV in 2015, NBC plans to launch a digital series to introduce the plot and characters. No cast members have been announced, though some may end up being from the original series' four seasons, which aired from 2006 to 2010. 'SNL' Is Reclaiming Its Turf via Social Media — Just in Time. If we take online comments as a scaled down version of the world at large, it's clear that 2014 global society is divided on three main topics: religion, climate change and which cast of Saturday Night Live was the best. As it stands, SNL has muscled through its 39th season amidst heavy criticism surrounding both a lack of cast diversity and a sketch model that, at times, seems to ignore contemporary culture.

As clutch cast members Bill Hader, Jason Sudeikis and Fred Armisen, along with writer John Mulaney, departed before the season's start, the obvious question was whether or not a largely young and inexperienced cast could carry the show to new heights. Enter: social media. When the 2013-2014 cast was announced, it included two members of the YouTube sketch sensation Good Neighbor (a third member joined as a writer). GetGlue Is Rebranding To tvtag, Will Get Big Update Next Week. The Grammys Social Team Is Just 1 Woman: This Is How She Does It All. LOS ANGELES — How would you react if singer Taylor Swift followed you on Twitter, considering she follows only 121 accounts compared to the more than 38 million ones following her? When Swift pushed the follow button on @TheGRAMMYs several months ago, the person behind that Twitter handle had quite the reaction.

GetGlue Is Rebranding To tvtag, Will Get Big Update Next Week. Just Ahead Of The Winter Olympics, Gnip Adds Russian Network VK To Its Social Data. Social data provider Gnip is announcing its first integration with a Russian company, specifically social network VK (formerly VKontakte). Gnip CEO Chris Moody notes in a blog post that Russia is one of the most “interesting” regions for his customers, and “while Facebook, Twitter, Foursquare and others continue to see growth” there, VK remains “far and away the dominant social network” with 236 million users. Moody added that in the lead up to the Winter Olympics in Sochi, Russia, “the demand for social data from VK has grown from a murmur to a deafening buzz.”

Apparently Gnip has already been testing out the integration of VK into its Data Collector product, and it has been used by customers including Oracle and Adobe. The Russian social network was also in the news recently because of rumors that it had hired Edward Snowden (rumors that turned out to be untrue). Founder Pavel Durov (pictured above) talked about competing with global companies at our Disrupt Europe conference last fall. HBO's 'Girls' Is Now on Snapchat. If you want to catch more funny antics from HBO's Girls, you're in luck. The TV show joined Snapchat this week and is using the messaging service to send fans silly pictures, reminders about the season premiere and, soon, shots from the red carpet. This season, we're living snappily whatever after.It's official. Add girlsHBO on @Snapchat. pic.twitter.com/vcLc4HbMoB— Girls (@girlsHBO) January 3, 2014 Best snapchat ever @girlsHBO pic.twitter.com/3K7OkB547w— Haley Mann (@_hayyy) January 5, 2014.