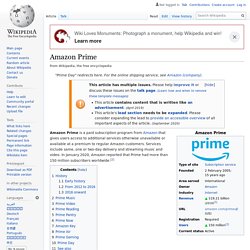 Netflix. Netflix, Inc. is a provider of on-demand Internet streaming media available to viewers in North and South America, the Caribbean, and parts of Europe (Denmark, Finland, Ireland, The Netherlands, Norway, Sweden, United Kingdom, France, Switzerland, Austria, Belgium, and Germany),[4] and of flat rate DVD-by-mail in the United States, where mailed DVDs are sent via Permit Reply Mail. 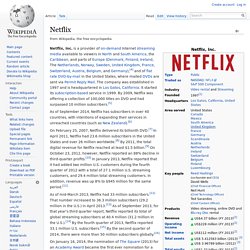 The company was established in 1997 and is headquartered in Los Gatos, California. Hulu. American provider of on-demand streaming media In March 2019, Disney acquired 21st Century Fox, giving it a 60% majority stake in Hulu. 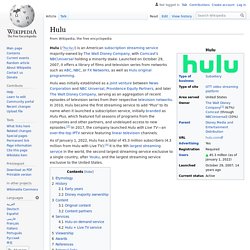 AT&T (which acquired Time Warner in 2018) sold back its roughly 10% stake the following month. Showtime (TV network) American pay television network Showtime is an American premium television network that is owned by ViacomCBS Domestic Media Networks, and is the flagship property of parent subsidiary under its Premium Content Group unit, Showtime Networks. 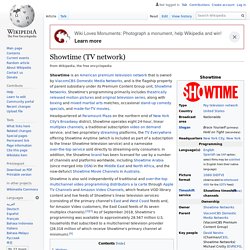 Showtime's programming primarily includes theatrically released motion pictures and original television series, along with boxing and mixed martial arts matches, occasional stand-up comedy specials, and made-for-TV movies. Subscribers to the separate premium film service The Movie Channel, which is also owned by ViacomCBS, do not necessarily have to subscribe to Showtime in order to receive TMC; both The Movie Channel and co-owned fellow movie service Flix are typically sold together in a package (although in the case of Flix, this depends on whether that channel is carried on a particular television provider), though DirecTV and Dish Network alternately sell TMC through a separate film tier. 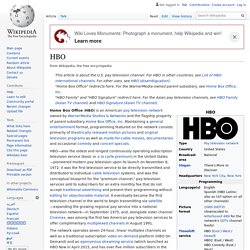 Maintaining a general entertainment format, programming featured on the network consists primarily of theatrically released motion pictures and original television programs as well as made-for-cable movies, documentaries and occasional comedy and concert specials. Overview[edit] As of September 2018[update], HBO's programming was available to approximately 35.656 million U.S. households that had a subscription to a multichannel television provider (34.939 million of which receive HBO's primary channel at minimum),[4] giving it the largest subscriber total of any American premium channel. Sundance TV. American digital cable and satellite television network Sundance TV (formerly known as Sundance Channel) is an American pay television channel owned by AMC Networks that launched on February 1, 1996. 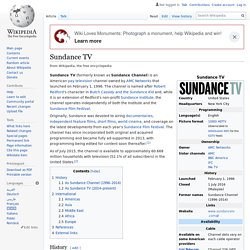 The channel is named after Robert Redford's character in Butch Cassidy and the Sundance Kid and, while it is an extension of Redford's non-profit Sundance Institute, the channel operates independently of both the Institute and the Sundance Film Festival. AMC (TV channel) Around this time, General Electric/NBC owned a stake in AMC – which it divested in the early 2000s. 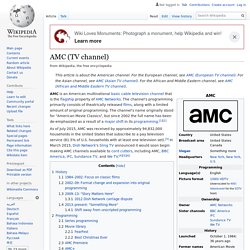 From 1996 to 1998, AMC aired its first original series, Remember WENN, a half-hour scripted series about a radio station during the peak of radio's influence in the 1930s. The show was well received by both critics and its enthusiastic fans, but was abruptly cancelled after its fourth season following management changes at the channel (WENN was followed up by The Lot, which lasted for only 16 episodes). Despite a well publicized write-in campaign to save the series, the show was not renewed for its originally scheduled fifth season. AMC logo used from 2000 to 2002. The majority of the films presented on AMC during the 1990s had originally been released by Paramount Pictures, 20th Century Fox, Columbia Pictures, and Universal Studios.

Channel Zero (TV series) Season 1: Candle Cove A child psychologist returns to his hometown to determine if his brother's disappearance is somehow connected to a series of similar incidents and a bizarre children's television series that aired at the same time. 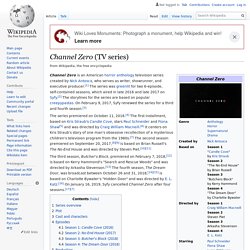 Season 2: No-End House A young woman and her group of friends visit a house of horrors only to find themselves questioning whether it is a tourist attraction or something more sinister. Sharp Objects (miniseries) 2018 psychological thriller television miniseries Sharp Objects is a 2018 American psychological thriller television miniseries based on Gillian Flynn's 2006 debut novel of the same name that premiered on July 8, 2018, on HBO. 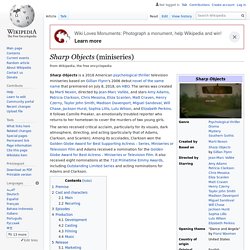 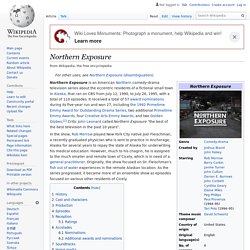 However, much to his chagrin, he is assigned to the much smaller and remote town of Cicely, which is in need of a general practitioner. Originally, the show focused on Dr. Fleischman's fish out of water experiences in the remote Alaskan location. Tenacious D (TV series) The series follows the exploits of JB and KG, the two halves of Tenacious D., the self-proclaimed "greatest band on earth. " Dream On (TV series) American sitcom The show centered on Martin Tupper's (Brian Benben) life in an apartment in New York City with his teenaged son, and relating to his ex-wife, while trying to date other women and succeed as an editor for a small book publisher with Toby, his brassy secretary. Judith, his ex-wife, went on to marry Dr. Richard Stone – the never-seen (until the end of the series), most impossibly successful man on the planet (astronaut, brain surgeon, the fifth Beatle and consultant to the Pope); despite Martin's undying love for Judith, he could never compete with the legendary Dr.

Stone. The show was created by Marta Kauffman and David Crane, who also served as producers. To this day, the static shown on the TV towards the end of the opening credits forms part of the opening credits or introduction for every show made by HBO. The edited version of the series aired in syndication on Comedy Central in the United States. List of HBO original programming. From Wikipedia, the free encyclopedia Jump to navigationJump to search Wikipedia list article This is a listing of programs that HBO has commissioned or co-commissioned in its history.

Current programming[edit] The Outer Limits (1963 TV series) American television series on ABC (1963-1965) Each show would begin with either a cold open or a preview clip, followed by a "Control Voice" narration that was mainly run over visuals of an oscilloscope. Using an Orwellian theme of taking over your television, the earliest version of the narration ran as follows: There is nothing wrong with your television set. Do not attempt to adjust the picture. We are controlling transmission. The X-Files. Bad Samaritans. This article is about the comedy web series. For the book on economic development, see Ha-Joon Chang. Bad Samaritans is an American comedy web series produced by Walt Becker, Kelly Hayes, and Ross Putman.[1] It premiered on Netflix on March 31, 2013 and various digital distribution platforms on April 2, 2013. §Cast and characters[edit] The show focuses on a community service parole group and their parole officer.

Brian Kubach as Jake Gibson, an aspiring professional StarCraft player who gets sentenced to 2000 hours of community service for starting a forest fire during his breakup with Drew. §Premise[edit] When Jake and Drew's anniversary picnic turns into a massive breakup that accidentally starts a raging wildfire, they are both sentenced to 2,000 hours of community service which they have to serve together. Trailer Park Boys. Herman's Head. Herman's Head is an American sitcom that aired on the Fox network from September 8, 1991 until April 21, 1994. The series was created by Andy Guerdat and Steve Kreinberg, and produced by Witt/Thomas Productions in association with Touchstone Television.

William Ragsdale stars as the titular character, Herman Brooks. Adam DeVine's House Party. Hustle (TV series) Jaime Murray completed the lead actors, playing Stacie Monroe who, as the grifters' only female member, is self-styled as "the lure".[13] Murray, described by one of the Hustle production team as "that rare specimen – a stunningly beautiful actress who can actually act",[15] and who auditioned in platform shoes to match her 5 ft 7in height with Stacie's description as having "legs that go on for miles",[16] was reportedly "terrified" to be working with the more famous actors Vaughn and Lester, saying "when we were filming the first couple of episodes I was absolutely petrified and was convinced that it would be really obvious on screen.

So when I watched some of it on tape I was totally amazed that you couldn't see how frightened I really was. Angry Boys. The series is a co-production between the Australian Broadcasting Corporation and US cable channel HBO, with a pre-sale to BBC Three in the United Kingdom.[1] Filmed in Melbourne, Los Angeles and Tokyo, Angry Boys premièred on 11 May 2011 at 9:00 pm on ABC1. §Production[edit] Summer Heights High. Undergrads. The Crazy Ones. The Crazy Ones is an American sitcom created by David E. Kelley that starred Robin Williams and Sarah Michelle Gellar. The single-camera series aired on CBS from September 26, 2013 to April 17, 2014. It was part of the 2013–14 American television season as a Thursday night 9:00 pm Eastern / 8:00 pm Central entry.[1][2][3] Bill D'Elia, Dean Lorey and Jason Winer served as executive producers for 20th Century Fox Television. Category:MTV cartoons.