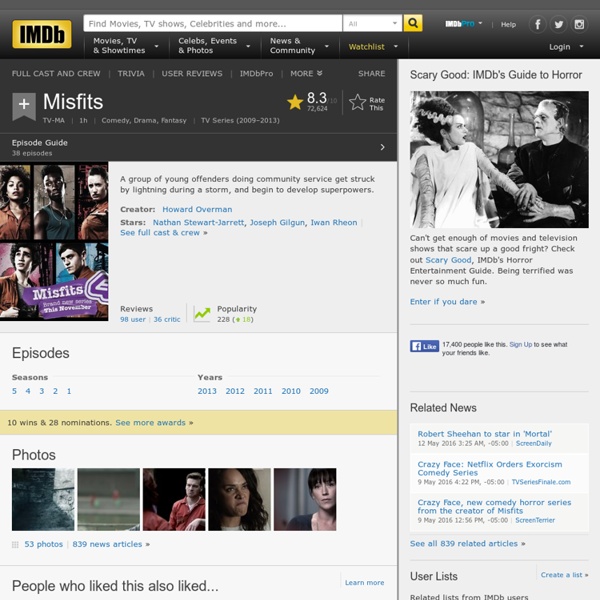 Edit Storyline Nathan, Kelly, Simon, Alisha and Curtis were expecting their community service to be boring. However after a freak thunderstorm they discover that it is anything but dull. Bestowed with strange powers, the five very different teens realize they have a lot more to worry about than just picking up litter, especially as they discover that they are not the only ones who have been given strange powers. Secrets will be revealed, feelings brought to the surface and relationships formed and broken. Plot Summary | Add Synopsis Taglines: When five young outsiders on community service get caught in a strange storm they soon realise they have developed superpowers. Edit Did You Know? Trivia Over the course of the show's first three seasons, each character was given their own Twitter accounts, supervised by writer Howard Overman himself. Connections Referenced in The Big Fat Quiz of the Year (2011) See more » Soundtracks Echoes Written by The Rapture Performed by The RaptureSee more »

Married with Children (TV Series 1987–1997 Les Revenants (TV Series 2012– Trailer Utopia Shine a Light Rose: Kdrama Review: Nine: Nine Times Time Travel (2013) Poor Nine. Poor me. When I heard months ago there’d be yet another time travel drama (with such an obnoxiously long title), I wrote it off instantly. As a favor to a fellow editor, I then found myself proofing a single mid-drama episode recap, and while reading it on a grammar/spelling only basis, I couldn’t figure out what the hell was going on and it sounded utterly ridiculous. I fully planned on it being included on this year’s upcoming “Dramas I Skipped” post.

Shine a Light Rose: Cdrama Review: Bu Bu Jing Xin (2011) And if you have already, read on for a short series of essays on Bu Bu Jing Xin. :) WARNING: Major Spoilers - Stop reading now unless you've finished the drama and are majorly obsessed with it. Like me. Add the costumes and you’re eyes will be feasting on the most delicious details in every scene. From women’s dresses to the prince’s wardrobes, hair styles, ornaments and jewelry, everything aids the scene, the story, or the overall feel.

American Gods (TV series) - Wikipedia The series will focus on the mysterious Shadow Moon, a man serving three years in prison for assault. With only days remaining in his sentence, Shadow is given an unexpected early release after his beloved wife Laura is killed in a car accident. Flying home for the funeral, Shadow is seated next to a man calling himself Wednesday, who offers Shadow a job he seems all too confident that Shadow will accept. Arriving home, Shadow finds that the life he thought was waiting for him is gone.