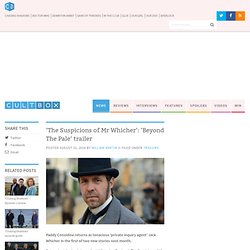 Set against the backdrop of mid Victorian England, The Suspicions of Mr Whicher is inspired by the real life career of celebrated 19th century detective Jonathan ‘Jack’ Whicher. ‘Beyond The Pale’ airs at 9.05pm on Sunday 7 September on ITV. Classic Radio/TV World: Science Fiction Theatre (1955–1957) Science Fiction Theatre is an American science fiction anthology series that aired in syndication from April 1955 to April 1957. 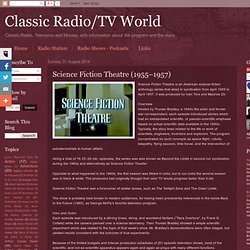 It was produced by Ivan Tors and Maurice Ziv. Overview Hosted by Truman Bradley, a 1940s film actor and former war correspondent, each episode introduced stories which had an extrapolated scientific, or pseudo-scientific emphasis based on actual scientific data available in the 1950s. Typically, the story lines related to the life or work of scientists, engineers, inventors and explorers.

The program concentrated on such concepts as space flight, robots, telepathy, flying saucers, time travel, and the intervention of extraterrestrials in human affairs. ABC Developing Series Based on Richard Castle's DERRICK STORM Books. Mannequin actor Meshach Taylor dies at 67. 30 June 2014Last updated at 05:56 ET Meshach Taylor was nominated for an Emmy for his role in Designing Women Actor Meshach Taylor, best known for the 1980s comedy Mannequin and the US show Designing Women, has died at 67. 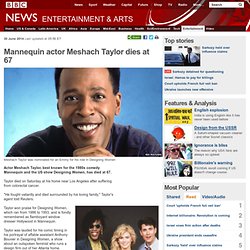 Taylor died on Saturday at his home near Los Angeles after suffering from colorectal cancer. "He fought valiantly and died surrounded by his loving family," Taylor's agent told Reuters. 'Allo 'Allo star Sam Kelly dies at 70. 14 June 2014Last updated at 16:17 ET British actor Sam Kelly, best known for his roles in Allo Allo and Porridge, has died at the age of 70. 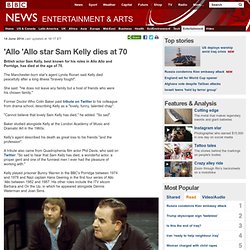 The Manchester-born star's agent Lynda Ronan said Kelly died peacefully after a long illness "bravely fought". She said: "He does not leave any family but a host of friends who were his chosen family. " Former Doctor Who Colin Baker paid tribute on Twitter to his colleague from drama school, describing Kelly as a "lovely, funny, talented chap". "Cannot believe that lovely Sam Kelly has died," he added. Classic Radio/TV World: The Lost City (1935 serial) The Lost City is an independently made fantasy film serial produced in 1935 directed by Harry Revier Plot Scientist Bruce Gordon comes to a secluded area in Africa after realizing that a series of electrically induced natural disasters had been detected in the area. 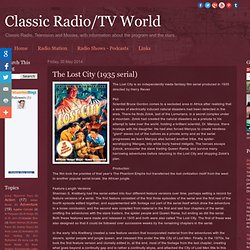 There he finds Zolok, last of the Lemurians, in a secret complex under a mountain. Zolok had created the natural disasters as a prelude to his attempt to take over the world, holding a brilliant scientist, Dr. Manyus, there hostage with his daughter. He had also forced Manyus to create mindless "giant" slaves out of the natives as a private army and as the serial progresses we learn Manyus also turned another tribe, the spider-worshipping Wangas, into white burly haired midgets. 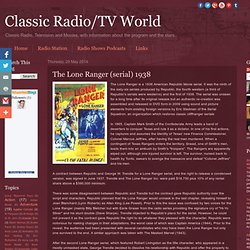 It was the ninth of the sixty-six serials produced by Republic, the fourth western (a third of Republic's serials were westerns) and the first of 1938. The serial was unseen for a long time after its original release but an authentic re-creation was assembled and released in DVD form in 2009 using sound and picture elements from existing foreign versions by Eric Stedman of the Serial Squadron, an organization which restores classic cliffhanger serials In 1865, Captain Mark Smith of the Confederate Army leads a band of deserters to conquer Texas and rule it as a dictator. In one of his first actions, he captures and assumes the identity of Texas' new Finance Commissioner, Colonel Marcus Jeffries, after having the real man murdered. When a contingent of Texas Rangers enters the territory, Snead, one of Smith's men, leads them into an ambush by Smith's "troopers". 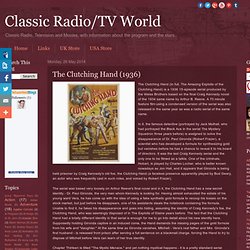 Reeve. A 70 minute feature film using a condensed version of the serial was also released in the same year as was a radio serial of the same name. In it, the famous detective (portrayed by Jack Mulhall, who had portrayed the Black Ace in the serial The Mystery Squadron three years before) is assigned to solve the disappearance of Dr. Paul Gironda (Robert Frazer), a scientist who has developed a formula for synthesizing gold but vanishes before he has a chance to reveal it to his board of directors. The Fighting Marines (1935) The Fighting Marines (1935) is a Mascot movie serial. 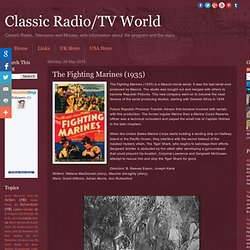 It was the last serial ever produced by Mascot. The studio was bought out and merged with others to become Republic Pictures. This new company went on to become the most famous of the serial producing studios, starting with Darkest Africa in 1936. Future Republic Producer Franklin Adreon first became involved with serials with this production. 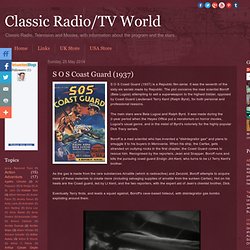 It was the seventh of the sixty-six serials made by Republic. The plot concerns the mad scientist Boroff (Bela Lugosi) attempting to sell a superweapon to the highest bidder, opposed by Coast Guard Lieutenant Terry Kent (Ralph Byrd), for both personal and professional reasons. The main stars were Bela Lugosi and Ralph Byrd. Tarzan the Tiger (1929) Robinson Crusoe of Clipper Island (1936) Peter Capaldi in The Musketeers. The BBC have released promotional pictures of Peter Capaldi, who readers may be familiar with in his work on Doctor Who, in the upcoming drama, The Musketeers - click on the images included here for bigger versions. 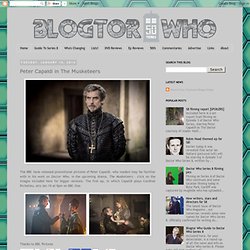 The first ep, in which Capaldi plays Cardinal Richelieu, airs Jan 19 at 9pm on BBC One. Thanks to BBC Pictures. Bill Nighy to star as Sergeant Wilson in new Dad's Army film. A new film version of Dad's Army looks set to go ahead. Based on the classic BBC sitcom about the bumbling members of a Home Guard unit on England's south coast during the Second World War, the new project will star Toby Jones and Bill Nighy (pictured). Jones, who played Alfred Hitchcock in the 2012 TV drama The Girl, will take on the role of Captain Mainwaring, the self-important leader of the unit, portrayed by Arthur Lowe in the classic 1968 to 1977 BBC sitcom.

Meanwhile, Love Actually star Bill Nighy will take on the role of the calm, suave Sergeant Wilson, the character previously played by John Le Mesurier. A Dad's Army film already exists. The 1971 movie, written by creators Jimmy Perry and David Croft, follows the platoon from their humble beginnings into their formation as a "formidable" fighting unit. When news of the idea to make a new film first emerged in November 2012, it was met with disdain from fans. It has not yet been announced who will play the other main roles. Still Open All Hours commissioned for full series. 30 January 2014Last updated at 07:13 ET David Jason's Granville now runs the shop, having started out as a delivery boy A full series of Still Open All Hours has been ordered following the success of its revival for a Christmas special. David Jason will return as shopkeeper Granville for six half-hour episodes to be shown on BBC One later this year.

The original Open All Hours ran for 26 episodes in the 1970s and 80s, and starred Ronnie Barker as grocer Arkwright, the uncle of Granville. Trigger, Roger Lloyd-Pack - News - People. His agent, Maureen Vincent, said he died of pancreatic cancer at his London home on Wednesday night, surrounded by his family. 'Alright, Dave': Trigger's Best Only Fools And Horses Bits After a career spanning almost 50 years across stage and screen, Lloyd-Pack was also known for roles in The Vicar of Dibley and Doctor Who. His recent film roles included Barty Crouch in 2005's Harry Potter and the Goblet of Fire and a role in Tinker, Tailor, Soldier, Spy.

He was also a staunch socialist, often spotted at political marches and rallies for nuclear disarmament and left-wing causes. Upon the news, Graham Linehan - creator of Father Ted and The IT Crowd - tweeted: "Very sad news about Roger Lloyd-Pack. And John Challis, who as car dealer Boycie appeared alongside Lloyd-Pack for years in "Only Fools", said: "I spoke to Roger two days ago.

Loading gallery Farewell, Trigger: Roger Lloyd-Pack's Career In Pictures 1 of 16 "My thoughts are with his family. Reader reviews of DI Richard Poole's murder in Death in Paradise season 3. Well, that's that then. DI Richard Poole is no more, hastily replaced by Kris Marshall's Humphrey Goodman in a murderous start to the third series of Death in Paradise. Blink and you'd have missed it. Now, we're all too aware of the high esteem in which Ben Miller's beloved character was held.

His bumbling British ways and will-they, won't-they relationship with leggy Camille will no doubt be sorely missed, but was he given a fair send-off? And what did you lot make of his equally-bumbling successor? HOW COULD THEY DO THAT TO US? I am shocked! It was a shock to see Richard Poole killed off so precipitously. Gavin and Stacey may return as a film, says co-creator and star Ruth Jones. Movie material?