What the Hell Is The Walking Dead Even Doing. Episode 29 is on youtube. We'll be... - Magnificent Century English. Muhteşem Yüzyıl Translations. @"MUHTESEM YUZYIL" Εnglish TRANSLATION-SUMMARY... ALL the episodes! Kosem, Episode 30, Season Finale Translation. Please note, I may give characters names like the terrible, the traitor, the horrid, please don't mind me I just expect I might get angry at them :) Kosem holding the rope that Osman was strangled with and Osman's voice saying: "Look at the condition of this world, yesterday morning I was the Padishah of the world, now I am weak. 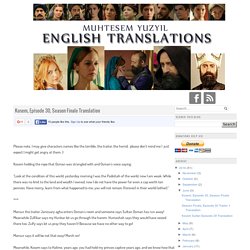 While there was no limit to the land and wealth I owned, now I do not have the power for even a cap worth ten pennies. Have mercy, learn from what happened to me, you will not remain (forever) in their world (either). " Mansur the traitor Janissary agha enters Osman's room and someone says Sultan Osman has run away! Mansur says it will be not that easy! Meanwhile, Kosem says to Halime, years ago, you had held my princes captive years ago, and we know how that ended. Zulfikar tells the aghas (and the cariyes) to get inside the harem main hall and lock the doors to the harem hall. Kosem says sh. Mansur tells Davut that Osman has escaped. “Muhtesem Yuzyil” or “Magnificent Century” If you liked watching “The Tudors”, “Rome” and you really, REALLY liked “300” well than, you’ll love this show! 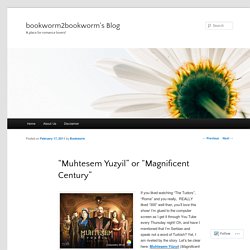 I’m glued to the computer screen as I get it through You Tube every Thursday night! Oh, and have I mentioned that I’m Serbian and speak not a word of Turkish? Yet, I am riveted by the story. Let’s be clear here: Muhteşem Yüzyıl (Magnificent Century) is a Turkish television series based on the life of Suleiman the Magnificent. To watch the 1st Episode with English subtitles click here: It is a serial about the past of Ottoman Empire. Ottoman Empire to be seen as such a den of iniquity. WHATEVER!!! The Hero's Journey in Game of Thrones: Daenerys Targaryen.

What is the Hero’s Journey? 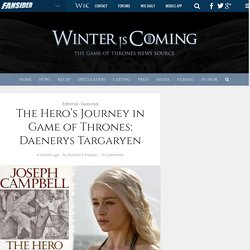 It is a basic narrative pattern common across all cultures and time that seems to be shared by all heroic characters. With this in mind, mythologist Joseph Campbell designed a paradigm, also known as the monomyth, to identify the universal stages of the hero’s journey. In this series, we take a look at Game of Thrones characters and how their unfolding path follows the hero’s journey. This time: Daenerys Targaryen. Daenerys Targaryen. Brit Binge Watching: 10 British Titles to Watch on HBO GO. HBO GO is streaming TV at its finest with close to 50 British TV shows and films available for viewing online and on your phone via the HBO GO app. 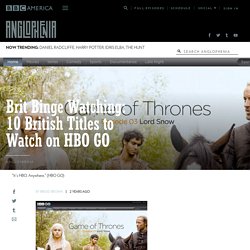 If you’re an HBO subscriber you can provide your details and sign up easily here. Also, since HBO’s partnership with Amazon, some of these titles are available on Amazon Prime. We’re all missing Game of Thrones, but that doesn’t mean we need to twiddle our thumbs waiting for winter to come. So, go: TV Shows: 1. More on Parade’s End via HBO.Watch Parade’s End on Amazon.com Prime. 2.

More on Doll and Em via HBO. 3. More on Family Tree via HBO.Watch Family Tree on Amazon.com Prime. 4. More on Five Days via BBC One. 5. More on Little Britain USA via HBO.Watch Little Britain USA on Amazon Prime. Movies:1. More on Anna Karenina via HBO.Watch Anna Karenina on Amazon Instant. 2. Magnificent Century Episode 1 - English Subtitles. Vikings (TV series) Vikings is inspired by the sagas of Viking Ragnar Lothbrok, one of the best-known legendary Norse heroes and notorious as the scourge of England and France. 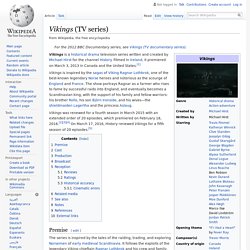 The show portrays Ragnar as a farmer who rises to fame by successful raids into England, and eventually becomes a Scandinavian king, with the support of his family and fellow warriors: his brother Rollo, his son Björn Ironside, and his wives—the shieldmaiden Lagertha and the princess Aslaug. The series is inspired by the tales of the raiding, trading, and exploring Norsemen of early medieval Scandinavia. It follows the exploits of the legendary Viking chieftain Ragnar Lothbrok and his crew and family, as notably laid down in the 13th century sagas Ragnars saga Loðbrókar and Ragnarssona þáttr, as well as in Saxo Grammaticus's 12th century work Gesta Danorum.

Norse legendary sagas were partially fictional tales based in Norse oral tradition, written down about 200 to 400 years after the events they describe. AWOS0209. Supersizers Go Regency Part 1 of 6 - Excellent sound! Orange is the New Black: A New TV Show Featuring a Humanist Behind Bars. If you’ve been on the Internet lately, you’ve probably noticed that the new Netflix original series Orange is the New Black is the topic du jour across Facebook feeds and entertainment blogs alike. 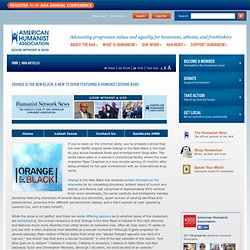 The series takes place in a women’s correctional facility where the main character Piper Chapman is a new inmate serving 15 months after being arrested for her past involvement with an international drug cartel. Orange is the New Black has received acclaim throughout the interwebs for its compelling storylines, brilliant blend of humor and drama, and diverse cast comprised of approximately 80% women. Even more remarkably, the series carefully and intelligently handles storylines featuring characters of several races and ethnicities, queer women of varying identities and presentations, prisoners from different socioeconomic classes, and a trans woman of color (played by Laverne Cox, who is trans herself). Game of Thrones — Unofficial Game of Thrones TV Fan Site.