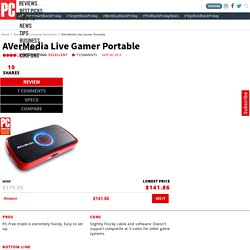 Thanks to an SD card slot and a PC-Free mode, you can capture what you play with the push of a button, without having a computer nearby. The $179.99 (list) box can be fussy at times, but it's the smoothest, easiest way to record video from a game console or other source we've seen yet, and is our Editors' Choice for video capture devices. DesignThe Live Gamer Portable is red, black, and tiny. PC-Free ModeThanks to the PC-Free mode and the big, glowing button, you can set up the Live Gamer Portable and start recording footage in just a few seconds. 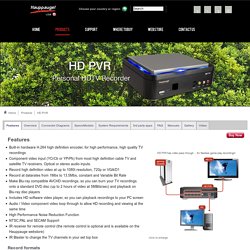 Optical or stereo audio inputs. Record high definition video at up to 1080i resolution, 720p or VGA/D1 Record at datarates from 1Mbs to 13.5Mbs, constant and Variable Bit Rate Make Blu-ray compatible AVCHD recordings, so you can burn your TV recordings onto a standard DVD disc (up to 2 hours of video at 5MBits/sec) and playback on Blu-ray disc players Includes HD software video player, so you can playback recordings to your PC screen Audio / Video component video loop through to allow HD recording and viewing at the same time High Performance Noise Reduction Function NTSC,PAL and SECAM Support IR receiver for remote control (the remote control is optional and is available on the Hauppauge webstore) IR Blaster to change the TV channels in your set top box. 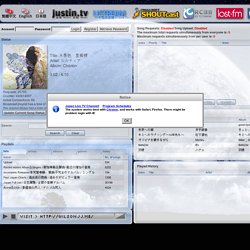 How to Install Android Apps on Android TV. Android is everywhere, Phones, tablets and now even TVs. 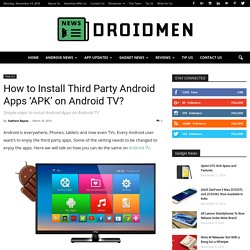 Every Android user want’s to enjoy the third party apps. Some of the setting needs to be changed to enjoy the apps. Here we will talk on how you can do the same on Android TV. The biggest flexibility of using is installing and uninstalling apps manually as per your needs. A lot of great apps which are developed aren’t available on the Google Play Store because of a lot of reasons, being an open source operating system, android allows us to install apps without even downloading them from the Google Play Store. You will just need the APK file of the app and begin downloading your favorite app, a lot of people do download APK files of premium apps and use them without paying for them, Although we don’t prefer you to do such things, as we feel that paying the developer for the work (efforts he/she/company has put in) is worth the price we pay. 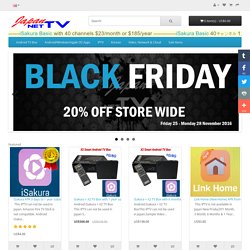 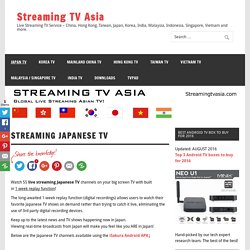 The long-awaited 1-week replay function (digital recordings) allows users to watch their favorite Japanese TV shows on demand rather than trying to catch it live, eliminating the use of 3rd party digital recording devices. Keep up to the latest news and TV shows happening now in Japan. Amazon US - brazil tv. Ali - tv box brazil. JpPlayer.