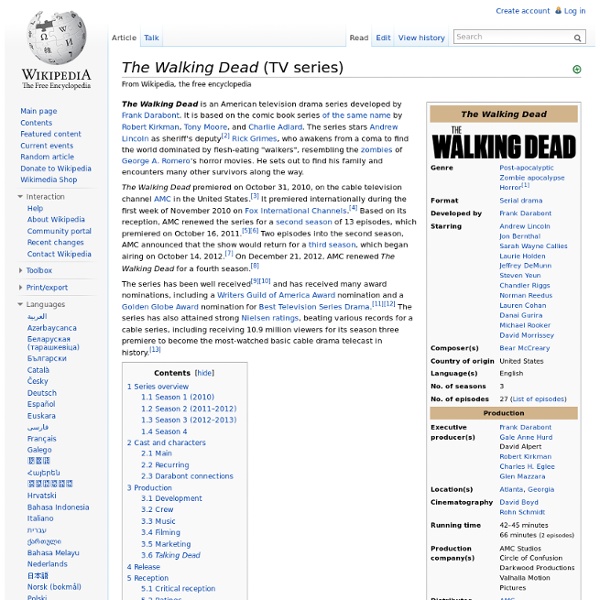 The series has been well received and has been nominated for many awards, including the Writers Guild of America Award[13] and the Golden Globe Award for Best Television Series – Drama.[14] The series has also attained strong Nielsen ratings, surpassing various records for a cable series, including viewership of 16.1 million for its season four premiere, making it the most-watched drama series telecast in basic cable history.[15] The group is led by Rick Grimes, who was a sheriff's deputy[3] before the zombie outbreak. At every turn they are faced with the horror of the walking zombies, the changing dynamic of their group, and hostility from the scattered remains of a struggling human populace who are focused on their own survival now that society's structures have collapsed. Andrea arranges a meeting between Rick and The Governor, who promises to end all hostilities in exchange for having Michonne handed over to him.

Rick Grimes Rick Grimes has been described as an everyman character who emphasizes moral codes and values.[2][3][4] Lincoln obtained the role in April 2010; Kirkman felt he was an "amazing find". In preparation for the role, Lincoln sought inspiration from Gary Cooper in his work in the American western film High Noon (1952) as well as the television drama series Breaking Bad. Lincoln has been well received for his portrayal of the character and has been nominated for a Saturn Award for best actor on television. Appearances[edit] Comic book series[edit] Some time later however, the Governor is revealed to be alive despite being horribly disfigured, and attacks the prison by manipulating his followers into believing Rick's group are marauders. After the prison is made insecure by the attack, Rick and the remaining survivors meet back up at Hershel's farm, where they come upon a new survivors who are on a mission to Washington, D.C., lead by Abraham Ford. Carl survives, initially with minor amnesia.

Blade & Soul Blade & Soul (Hangul: 블레이드 앤 소울; RR: Beulleideu aen soul) is a Korean fantasy martial-arts massively multiplayer online role-playing game (MMORPG) developed by NCsoft (Team Bloodlust). On September 13, 2012, NCsoft announced that Blade & Soul would release in Western territories, however a release date was not confirmed.[1] A Japanese animated television adaptation began airing on April 3, 2014 on TBS and other stations.[2] Gameplay[edit] Blade & Soul features a combination of martial arts inspired combat and Qing Gong in an open-world environment. Character Customization[edit] According to the developers, Blade & Soul will provide a highly customizable system and it has been stated that NPCs in the game were made with the character customization system.[4] Customizations a player has access to include hair styles, facial structures, eye color, height, and body type. Races[edit] Development[edit] The second closed beta test was scheduled from August 29 to September 10, 2011. Media[edit]

Zombie wiki Zombies are fictional undead creatures regularly encountered in horror and fantasy themed works. They are typically depicted as mindless, reanimated corpses with a hunger for human flesh, and particularly for human brains in some depictions. Some zombies are inspired from Haitian Vodun; while others, like the ones in George A. Romero's film Night of the Living Dead, do not have that same direct connection.[1][2] Zombies have a complex literary heritage, with antecedents ranging from Richard Matheson and H. P. The flesh-hungry undead have been a fixture of world mythology dating at least since The Epic of Gilgamesh,[3] in which the goddess Ishtar promises: I will knock down the Gates of the Netherworld, I will smash the door posts, and leave the doors flat down, and will let the dead go up to eat the living! And the dead will outnumber the living! The actor T. A young zombie (Kyra Schon) feeding on human flesh, from Night of the Living Dead (1968) "The kids in the audience were stunned.

Game of Thrones (TV series) Game of Thrones is an American fantasy drama television series created for HBO by David Benioff and D. B. Weiss. It is an adaptation of A Song of Ice and Fire, George R. R. Martin's series of fantasy novels, the first of which is titled A Game of Thrones. Game of Thrones has obtained an exceptionally broad and active international fan base. Plot[edit] Game of Thrones roughly follows the three story lines of A Song of Ice and Fire.[6] Set in the fictional Seven Kingdoms of Westeros, the series chronicles the violent dynastic struggles among the realm's noble families for control of the Iron Throne. The novels and their adaptation derive settings, characters and plot elements from much of European history.[7] A principal inspiration for the novels were the English Wars of the Roses[8] (1455–85) between the houses of Lancaster and York, reflected in Martin's houses of Lannister and Stark. Cast and characters[edit] Production[edit] Conception and development[edit] Adaptation schedule[edit]

Black Bullet Black Bullet (ブラック・ブレット, Burakku Buretto?) is a Japanese light novel series written by Shiden Kanzaki and illustrated by Saki Ukai, published under ASCII Media Works's Dengeki Bunko imprint. The series began publication on July 10, 2011, and 5 volumes have been published as of October 2013. A manga series began serialization on August 27, 2012 in ASCII Media Works's Dengeki Maoh. An anime adaptation by Kinema Citrus and Orange was announced at Dengeki Bunko's Autumn Festival 2013 on October 6, 2013 and started airing on April 8, 2014. Plot[edit] In the year 2021, mankind was decimated by the epidemic of Gastrea, a parasitical virus, and is forced to live within Monoliths, which are created from Varanium: a metal that is able to subdue Gastrea. Characters[edit] Tendō Civil Security[edit] Rentarō Satomi (里見 蓮太郎, Satomi Rentarō?) Voiced by: Yūki Kaji Rentarō is a second year student in Magata High School and also a Promoter in Tendō Civil Security. Enju Aihara (藍原 延珠, Aihara Enju?) Others[edit]

Decked Out: Zombie Apocalypse Unless you’ve been hibernating in your underground bunker for the last few weeks, you’re well aware that the zombie apocalypse is upon us (just like the Mayans predicted). We’re no suckers, we know there are a few steps we’ve got to take before any Walkers coming strolling into our neck of the woods. Besides settling on the ideal blunt object, we’ve got to have our attire in order. 1.