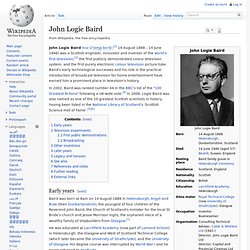 Baird's early technological successes and his role in the practical introduction of broadcast television for home entertainment have earned him a prominent place in television's history. In 2002, Baird was ranked number 44 in the BBC's list of the "100 Greatest Britons" following a UK-wide vote.[4] In 2006, Logie Baird was also named as one of the 10 greatest Scottish scientists in history, having been listed in the National Library of Scotland's 'Scottish Science Hall of Fame'.[5][6] Early years[edit] John Logie Baird. Born in Helensburgh (there is a bust of Baird on the waterfront there - see above), Baird studied electrical engineering at the Glasgow Royal College of Technology (now Strathclyde University). 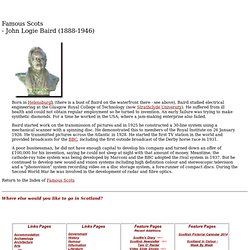 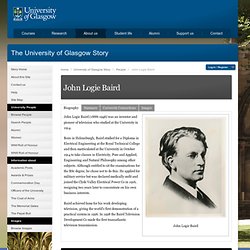 Born in Helensburgh, Baird studied for a Diploma in Electrical Engineering at the Royal Technical College and then matriculated at the University in October 1914 to take classes in Electricity, Pure and Applied, Engineering and Natural Philosophy among other subjects. Although entitled to sit the examinations for the BSc degree, he chose not to do this. He applied for military service but was declared medically unfit and joined the Clyde Valley Electrical Power Co in 1916, resigning two years later to concentrate on his own business interests. John Logie Baird. John Logie Baird (1888 - 1946) was trained as a motor mechanic and later became an electrician in a power station. 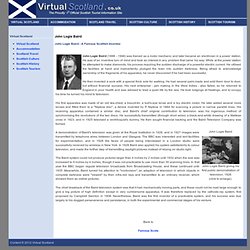 He was of an inventive turn of mind and took an interest in any problem that came his way. While at the power station he attempted to make diamonds, his process requiring the sudden discharge of a powerful electric current. He utilised the facilities at hand and inadvertently plubged the town into sudden darkness. Being afraid to acknowledge ownership of the fragments of his apparatus, he never discovered if he had been successful. He then invented a sock with a special thick sole for walking. His first apparatus was made of an old tea-chest, a biscuit-tin, a bull's-eye lense and a toy electric motor. Edinburgh-Royal Mile-John Logie Baird. 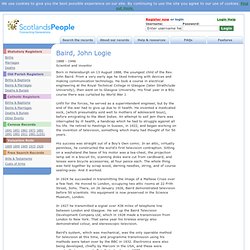 John Baird. From a very early age he liked tinkering with devices and making communication technology. He took a course in electrical engineering at the Royal Technical College in Glasgow (later Strathclyde University), then went on to Glasgow University. His final year in a BSc course there was curtailed by World War I. Unfit for the forces, he served as a superintendent engineer, but by the end of the war had to give up due to ill health. 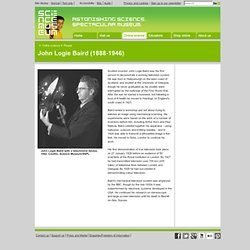 He was born in Helensburgh on the west coast of Scotland, and studied at the University of Glasgow, though he never graduated as his studies were interrupted by the outbreak of the First World War. After the war he started a business, but following a bout of ill health he moved to Hastings on England’s south coast in 1923. Baird rented a workshop and set about trying to televise an image using mechanical scanning.

His experiments were based on the work of a number of inventors before him, including Arthur Korn and Paul Nipkow. Baird cobbled together his apparatus - using hatboxes, scissors and knitting needles - and in 1924 was able to transmit a silhouetted image a few feet. His first demonstration of true television took place on 27 January 1926 before an audience of 50 scientists at the Royal Institution in London. John Logie Baird. The story of John Logie Baird's life is almost equal parts visionary genius, unfortunate setback (often in the form of fires) and ill health. 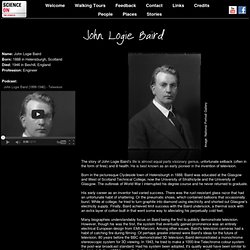 He is best known as an early pioneer in the invention of television. Born in the picturesque Clydeside town of Helensburgh in 1888, Baird was educated at the Glasgow and West of Scotland Technical College, now the University of Strathclyde and the University of Glasgow. The outbreak of World War I interrupted his degree course and he never returned to graduate. His early career as an inventor had varied success. There was the rust-resistant glass razor that had an unfortunate habit of shattering.

Many biographies understandably focus on Baird being the first to publicly demonstrate television. After battling what was known at the time as a 'weak constitution' for most of his life, due to a serious childhood illness, Baird died in 1946, aged 58, in Bexhill-on-sea, East Sussex from a stroke. The BBC Story - The story of BBC Television. History - John Logie Baird. John Logie Baird biography. Famous for: Inventing the first working televisionLater development of colour and stereoscopic television. 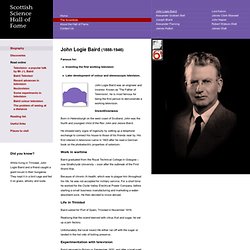 John Logie Baird was an engineer and inventor. Known as 'The Father of Television', he is most famous for being the first person to demonstrate a working television. Inventiveness. John Baird - Mechanical Television System. John Logie Baird was born on August 13th, 1888, in Helensburgh, Dunbarton, Scotland and died on June 14th, 1946, in Bexhill-on-Sea, Sussex, England. 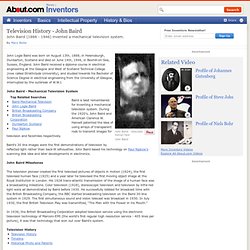 John Baird received a diploma course in electrical engineering at the Glasgow and West of Scotland Technical College (now called Strathclyde University), and studied towards his Bachelor of Science Degree in electrical engineering from the University of Glasgow, interrupted by the outbreak of W.W.I. John Baird - Mechanical Television System Baird is best remembered for inventing a mechanical television system. During the 1920's, John Baird and American Clarence W. Hansell patented the idea of using arrays of transparent rods to transmit images for television and facsimiles respectively. Baird's 30 line images were the first demonstrations of television by reflected light rather than back-lit silhouettes. John Logie Baird. John Logie Baird (1888-1946) So, who was John Logie Baird? 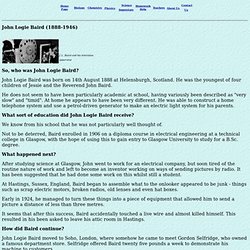 John Logie Baird was born on 14th August 1888 at Helensburgh, Scotland. He was the youngest of four children of Jessie and the Reverend John Baird. He does not seem to have been particularly academic at school, having variously been described as "very slow" and "timid". At home he appears to have been very different. John Logie Baird, television, and lifelong learning. Baird Television. John Logie Baird and Television. John Logie Baird and the invention of the television are part of History. But the idea of the television did not start with Logie Baird in the 1920’s. In the late C19th, a number of scientists had made important discoveries that Baird would use in his first version of a television. Henri Becquerel found that light could be changed into electricity and, importantly, Ferdinand Braun had invented the cathode ray tube. By the 1920’s there were 50 serious attempts to invent the television from Russia, America, Germany, Britain and Japan.

Many researchers had well resourced and staffed laboratories but the man who invented the television did not. Johnlogiebaird.com is under construction. John Logie Baird challenged by fellow Scot for TV title. NEW evidence suggests a Borders engineer, Alan Archibald Campbell-Swinton, may have come up with the idea nearly two decades prior to Baird's breakthrough. JOHN Logie Baird is being challenged by a fellow Scot for his title as the inventor of television. An engineer from the Borders is said to have proposed the idea of TV in 1908 – 17 years before Baird showed off a working set. Alan Archibald Campbell-Swinton published a magazine article that year in which he explained how visual images could be transmitted. His piece in Nature magazine was entitled Distant Electric Vision. Researcher Dr Paul Marshall is to present his case in Campbell-Swinton’s birthplace of Duns, Berwickshire.

Dr Marshall will tell the town’s history society that Baird would not have been able to achieve his success if it wasn’t for the work of Campbell-Swinton. Campbell-Swinton was born in 1863 and went to school in Edinburgh. John Logie Baird's grandson reveals why he shuns modern technology despite family history. WITH a family history of cutting edge technological innovations, you’d expect Iain Logie Baird to be right at the forefront of some high-tech gadgetry. After all, most of us now own a smartphone and have a social media account, whether it’s on Facebook or Twitter. We can contact our friends 24/7 and find out what’s happening in the world at the touch of our screens. But Iain believes that mobile phones and modern technology can make our lives more stressful – despite being the grandson of the inventor of television. The irony isn’t lost on Iain. His grandfather, John Logie Baird, is one of Scotland’s most legendary scientists. In 1927, he made the world’s first television broadcast from London to Glasgow’s Central Hotel – connecting the world and paving the way for the era of communication.

Yet his grandson admits he’s not a fan of modern technology, and Iain, 43, doesn’t even use a mobile phone.