Apes Scripts Archive. Televisions Sci-Fi and Superheroes of the 70's by dusty-abell on DeviantArt. The Great British Television Map Plots All of Your Favorite Shows From the U.K. If you’re a British TV enthusiast, you’d know the name of the town where your favorite show is set. 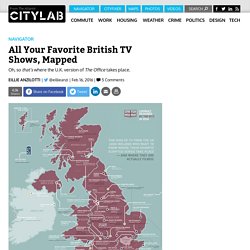 But could you pick it out on a map? Unlikely. While settling in to an episode of Foyle’s War, designer Tim Ritz’s wife asked him to show her where, exactly, Hastings was. He drew a map of the U.K. on a sticky note, with a dot on the East Sussex village. But he didn’t stop there. “All of our friends and families have been getting into British TV more and more over the years,” he tells CityLab. The Great British Television Map (h/t: The Great British Bake Off) attempts to remedy that. “Layer upon layer of cultural understandings underpin the television we watch,” Ritz says. In compiling the map, Ritz says he expected more shows to follow the Downton Abbey strategy of setting the show in one location (Yorkshire, in northern England) and filming it in another (Highclere Castle, in West Berkshire, where it’s sunnier). Map, $34 at Society6. 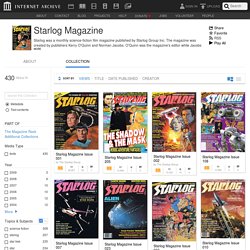 Favorite 7 comment 0 Starlog Magazine Issue 205 Among the Red Shadows : Director Russell Mulcahy knows where evil lurks Mask Maker : For green-faced antics, look to helmsman Chuck Russell On the 3:10 to Oblivion : Out there in the wilds of space, it's cowboys & aliens time Lunar Odysseys : Mankind has always wanted to make that leap to the Moon Alien Laws & Human Order : Pounding this galactic beat is a job for the Space Police Ensign Ro Reports : Michelle Forbes reviews her days on the... 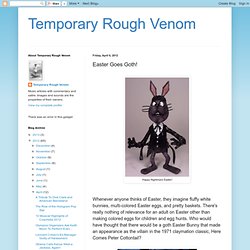 There's really nothing of relevance for an adult on Easter other than making colored eggs for children and egg hunts. Who would have thought that there would be a goth Easter Bunny that made an appearance as the villain in the 1971 claymation classic, Here Comes Peter Cottontail? This Goth Easter Bunny goes by January Q. Irontail and was voiced by Vincent Price, which automatically gets goth street cred. Irontail wears a black over coat and black vest and literally has a spiked iron tail that was a result of a child accidentally running over his original one. MST3K Wiki - Mystery Science Theater 3000. Internet Archive Search: mediatype:movies AND subject:"Sci Fi" Series 6 Episode 17 – The Monster Isolation. Scene: (After a “previously on” sequence) A coffee shop Raj: So then I went to Cambridge, which was wonderful not only because it’s a good school but because it totally looks like Hogwarts. 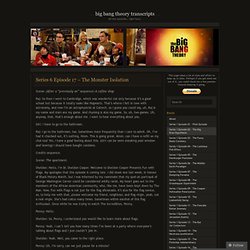 That’s where I fell in love with astronomy, and now I’m an astrophysicist at Caltech, so I guess you could say, uh, Raj is my name and stars are my game. And rhyming is also my game. So, uh, two games. Uh, anyway, that, that’s enough about me. Girl: I have to go to the bathroom. Raj: I go to the bathroom, too. Credits sequence. Scene: The apartment. Sheldon: Hello, I’m Dr. Penny: Hello. Sheldon: So, Penny, I understand you would like to learn more about flags. Penny: Yeah, I can’t tell you how many times I’ve been at a party where everyone’s talking about flags and I just couldn’t join in.

West Wars - Heroes by ~sillof on deviantART. ATAT.jpg (JPEG Image, 1168 × 1810 pixels) - Scaled (50%) Comics. Lists of Note. Game of Thrones. Watch Full TV Shows and Movies. Transformers. Exclusives. We are pleased to announce the winners from the recent nationwide search for the most distinctive rendition of fan favorite characters from the popular CGI animated series ReBoot. 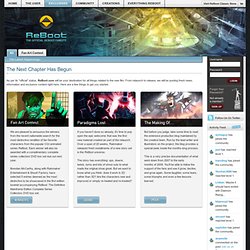 Each winner will also be awarded with a complimentary complete series collectors DVD box set due out next year. Brendan McCarthy, along with Rainmaker Entertainment & Shout! Factory, have selected 5 entries deemed as the most distinctive to be showcased in the first edition booklet accompanying ReBoot: The Definitive Mainframe Edition Complete Series Collectors DVD box set. Winners If you haven't done so already, it's time to pop open the epic webcomic that was the first new material created as part of the relaunch. The story has everything: ups, downs, twists, turns and lots of shout outs to what made the original show great. Retrovision Internet TV - Classic Movies and TV for free.