Une chambre de verre / A Glass Chamber (EXTRAITS) Parable of the Polygons - a playable post on the shape of society. This is a story of how harmless choices can make a harmful world. These little cuties are 50% Triangles, 50% Squares, and 100% slightly shapist. But only slightly! In fact, every polygon prefers being in a diverse crowd: You can only move them if they're unhappy with their immediate neighborhood. Once they're OK where they are, you can't move them until they're unhappy with their neighbors again. “I wanna move if less than 1/3 of my neighbors are like me.” Harmless, right? Drag & drop unhappy polygons until nobody is unhappy: (just move them to random empty spots. don't think too much about it.) And... our shape society becomes super segregated. Sometimes a neighborhood just becomes square, and it's not their fault if no triangles wanna stick around.

In this next bit, unhappy shapes automatically move to random empty spots. Run this simulation a few times. what happens? What's up with that? Small individual bias can lead to large collective bias. Equality is an unstable equilibrium. Woah. 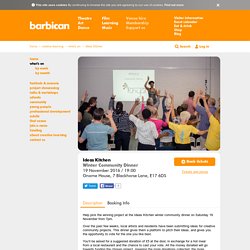 Over the past few weeks, local artists and residents have been submitting ideas for creative community projects. This dinner gives them a platform to pitch their ideas, and gives you the opportunity to vote for the one you like best. You’ll be asked for a suggested donation of £5 at the door, in exchange for a hot meal from a local restaurant and the chance to cast your vote. All the money donated will go towards funding the chosen project, meaning the more donations collected, the more funding it will receive.

If you have any questions, please email creative.learning@barbican.org.uk In partnership with The Mill, Gnome House, Bebop Baby and x7eaven. Trump, Brexit and the age of popular revolt: 2016 in Long Reads. The political earthquakes of 2016 have shaken the complacent preconceptions of the liberal establishment. 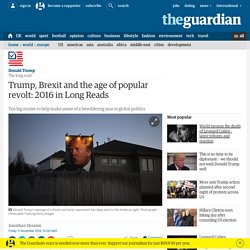 But the signs were there. Here are ten stories that tried to reckon with our new era of populist backlash. The dark history of Donald Trump’s rightwing revolt – Timothy Shenk The Republican intellectual establishment tried to block Trump – but his message of cultural and racial resentment has deep roots in the American right How technology disrupted the truth – Katharine Viner Social media has swallowed the news – threatening the funding of public-interest reporting and ushering in an era when everyone has their own facts.

How the education gap is tearing politics apart – David Runciman In the year of Trump and Brexit, education has become the greatest divide of all – splitting voters into two increasingly hostile camps. Abandoned places: the worlds we've left behind – in pictures. 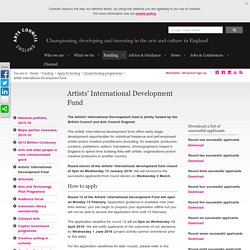 The Artists’ international development fund offers early stage development opportunities for individual freelance and self-employed artists and/or creative practitioners (including, for example: producers, curators, publishers, editors, translators, choreographers) based in England to spend time building links with artists, organisations and/or creative producers in another country. Round eleven of the Artists' international development fund closed at 5pm on Wednesday 13 January 2016. We will announce the successful applicants from round eleven on Wednesday 2 March. How to apply Round 12 of the Artists' International Development Fund will open on Monday 15 February.