Sophia and the Dragon - Early Wisdom Goddesses. Sophia is similar to the great goddesses of the ancient Near East: Maat, Themis, Isis, Demeter-Persephone, Athena. 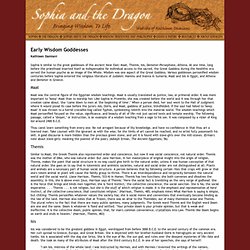 At one time, long before the priesthood inserted itself as indispensable for individual access to the sacred, the Great Goddess during the Neolithic era served the human psyche as an image of the Whole. Wisdom was one aspect of the Great Goddess. Various goddesses personified wisdom centuries before Sophia entered the religious literature of Judaism: Nammu and Inanna in Sumeria, Maat and Isis in Egypt, and Athena and Demeter in Greece.

Maat Maat was the central figure of the Egyptian wisdom teachings. Thou canst learn something from every one. Themis Similar to Maat, the Greek Themis also represented order and conscience, but now it was social conscience, not natural order. Isis Isis was considered to be the greatest goddess in Egypt, worshipped from before 3000 B.C.E. to the second century of the common era. Khokhmah and Sophia: the Judaic and Gnostic Goddess. Wisdom goddesses are a primary survival of Goddess consciousness within patriarchal systems. 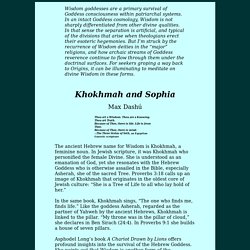 In an intact Goddess cosmology, Wisdom is not sharply differentiated from other divine qualities. In that sense the separation is artificial, and typical of the divisions that arise when theologians erect their esoteric hegemonies. But I’m struck by the recurrence of Wisdom deities in the “major” religions, and how archaic streams of Goddess reverence continue to flow through them under the doctrinal surfaces. For seekers groping a way back to Origins, it can be illuminating to meditate on divine Wisdom in these forms.

Khokhmah and Sophia Max Dashú. Hail Sophia – Goddess of the Feminine. The Goddess Sophia is sometimes known as the ‘Mother of All’ or more commonly known as ‘Wisdom’. According to Gnostic tradition Sophia was born of silence and was the feminine figure akin to the human soul, as well as coexisting as the feminine aspect of the Divine. Unfortunately by the year 200AD, all the feminine imagery of God that was part of the Gnostic tradition had been excised from the orthodox canon of their teaching, and until recent times very few people knew that some groups of the early Gnostic tradition had an actual icon of the Divine Mother. Sophia : Goddess of Wisdom. Committing yourself to Sophia will lead you on a difficult path. 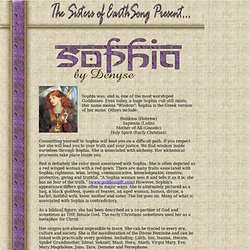 If you respect her she will lead you to your truth and your justice. We find wisdom inside ourselves through Sophia. Goddess Sophia. Honoring the Goddess Sophia It is I who am you: and it is you who are me. 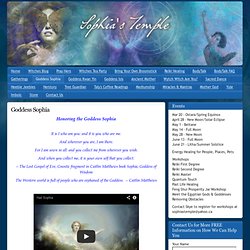 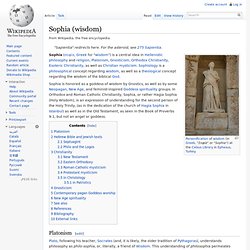 Sophia, Greek Goddess of Divine Wisdom and Gnostic Great Mother. I am the Glory-of-Light within. 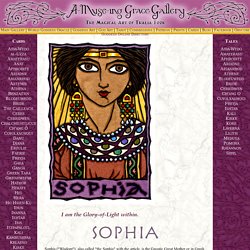 Sophia ("Wisdom"), also called "the Sophia" with the article, is the Gnostic Great Mother or in Greek, meter. She is the Goddess of Heaven and the mother of the stars and the Hebdomas, the Seven powers Who created the world. They are sometimes called "angels" but are of ambiguous character, since in Gnostic belief this material world is thought to be a lesser emanation of the divine world, filled with hostile and evil powers. The Seven find their antecedants in the seven "planets" of Babylonian belief. Gnosis means "deep knowledge" or "spiritual understanding", and was usually understood by the Gnostics to mean "revelation. " Is Sophia a Gnostic Goddess? In a sense, Sophia is not a Goddess, or even a God. 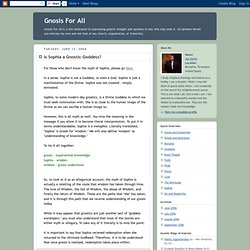 Sophia is just a manifestation of the Divine. Sophia was not created - simply eminated. Sophia, to some modern day gnostics, is a Divine Goddess to which we must seek communion with. She is as close to the human image of the Divine as we can ascribe a human image to. However, this is all myth as well. To tie it all together: gnosis - experiential knowledgeSophia - wisdomwisdom - gnosis understood So, to look at it as an allegorical account, the myth of Sophia is actually a retelling of the route that wisdom has taken through time. While it may appear that gnostics are just another sect of "goddess worshipers," you must also understand that most of the stories are either myth or allegory. It is important to say that Sophia recieved redemption when she returned to the Ultimate Godhead. Sophia: Goddess of Wisdom & God's Bride. Sophia: Goddess of Wisdom & God's Wife Sophia Prayers & Gallery By Katia Romanoff (with contributions by young Mark Raines) 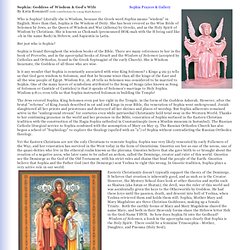