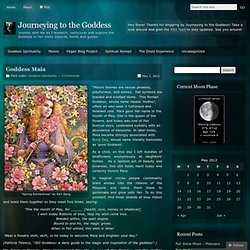 Her symbols are braided and knotted items. This Roman Goddess, whose name means ‘mother’, offers all who seek it fulfilment and renewed zest. Maia gave Her name to the month of May. She is the queen of the flowers, and today was one of Her festival days, celebrated suitably with an abundance of blossoms. As a child, on this day I left bundles of wildflowers anonymously at neighbors’ homes. In magical circles people customarily braid wishes into the ribbons of the Maypole and leave them there to germinate and grow until fall. ‘This the month of May, for ______ [health, love, money or whatever] I wish today Ribbons of blue, help my wish come true. Wear a flowery shirt, skirt, or tie today to welcome Maia and brighten your day.” Maia (mythology) Her name is related to μαῖα (maia), an honorific term for older women related to μήτηρ (mētēr) 'mother'. 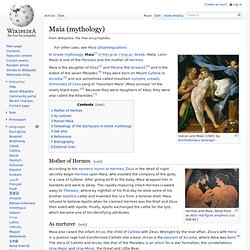 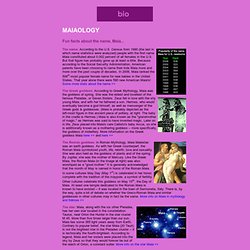 The name: According to the U.S. Census from 1990 (the last in which name statistics were analyzed) people with the first name Maia constituted about 0.002 percent of all females in the U.S. But that figure has probably gone up at least a little. Because according to the Social Security Administration, American parents have been choosing to name their kids Maia more and more over the past couple of decades. Maia. MAIA : Pleiad Nymph of Mount Cyllene in Arcadia. MAIA was the eldest of the Pleiades, the seven nymphs of the constellation Pleiades. 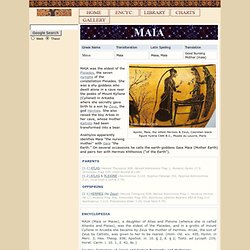 She was a shy goddess who dwelt alone in a cave near the peaks of Mount Kyllene (Cyllene0 in Arkadia where she secretly gave birth to a son by Zeus, the god Hermes. She also raised the boy Arkas in her cave, whose mother Kallisto had been transformed into a bear. Aiskhylos apparently idenifies Maia "the nursing mother" with Gaia "the Earth. " On several occassions he calls the earth-goddess Gaia Maia (Mother Earth) and pairs her with Hermes Khthonios ("of the Earth"). Hesiod, Theogony 938 ff (trans.

Hesiod, Astronomy Fragment 1 (from Scholiast on Pindar's Nemean Odea 2.16) (trans. Homeric Hymn 4 to Hermes 1 ff (trans. Homeric Hymn 4 to Hermes 142 ff : "[After stealing the cattle of Apollon, the infant god Hermes returns to his cradle in the cave of Maia:] Then the god went straight back again at dawn to the bright crests of Kyllene (Cyllene0 . . . Alcaeus, Fragment 308 (trans. Sources: The Goddess Maia. Pronounced May-ah, the Goddess Maia appears most commonly in Greek and Roman mythology but is typically represented as a fertility goddess associated with spring and the month of May. 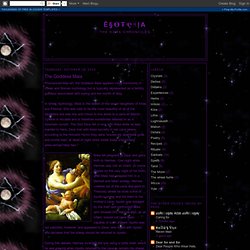 In Greek mythology, Maia is the eldest of the seven daughters of Atlas and Pleione. She was said to be the most beautiful of all of the daughters but was shy and chose to live alone in a cave on Mount Cyllene in Arcadia and is therefore sometimes referred to as a mountain nymph. The God Zeus fell in love with Maia while he was married to Hera. Zeus met with Maia secretly in her cave where, according to the Homeric Hymn they were “unseen by deathless gods and mortal men, at dead of night while sweet sleep should hold white-armed Hera fast. " Maia fell pregnant to Zeus and gave birth to Hermes. During this debate, Hermes invented the lyre using a turtle shell, which he was playing when Apollo returned to the cave to reclaim his sheep. Maia Maiestas, Goddess of Spring, Maia, Majesty, earth goddess, great goddess, earth mother, mother earth, Mercury, fertility goddess pagan gods and goddesses Roman Gods and goddesses wiccan wicca paganism pagan Thalia Took. 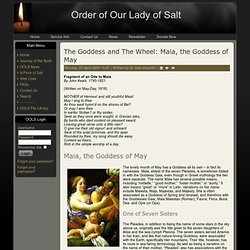 And still youthful Maia! May I sing to thee As thou wast hymn’d on the shores of Bai? Or may I woo thee In earlier Sicilian? Or thy smiles Seek as they once were sought, in Grecian isles, By bards who died content on pleasant sward, Leaving great verse unto a little clan? O give me their old vigour! The lovely month of May has a Goddess all its own – in fact its namesake. Maia in Greek Mythology. Topic: Greek Mythology ClassBrain Visitor: Who are Maia’s ( in greek mythology ) enemies? 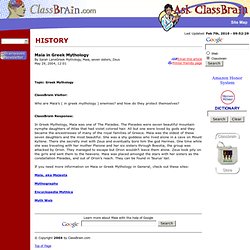 And how do they protect themselves? ClassBrain Response: The Name "Maya" Maya's name has many roots. 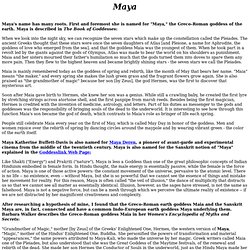 Maia: the Goddess, the Month and the World-illusion. The Day of Maia falls on April 18th, which is the First of Maia in the Filianic Calendar. 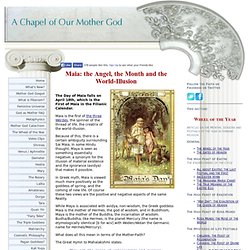 Maia is the first of the three Werdes, the spinner of the thread of life, the creatrix of the world-illusion. Because of this, there is a certain ambiguity surrounding Sai Maia. In some Hindu thought, Maya is seen as something essentially negative: a synonym for the illusion of material existence and the ignorance (avidya) that makes it possible.