One woman’s battle to heal her home city of Homs. In Syria, an aphorism contends that “one who has no old has no new”. 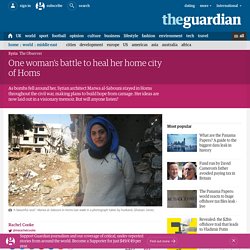 Into the heart of terror: behind Isis lines. Sunday 7 December 2014 Abu Qatadah, a German-born Muslim convert, who has brokered our visit to the Islamic State, is almost as wide as he is tall, with a thick, reddish-brown beard. 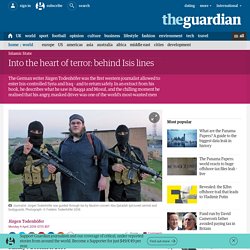 My photographer son Frederic and I load our bags into the bed of the white pickup Qatadah and his driver arrived in. The driver’s head and face are so thoroughly wrapped with a large grey shawl that only his eyes and the contours of his nose are visible. He murmurs a greeting in English in a strikingly rhythmic accent. For security reasons, we can’t use the main roads.

Qatadah claims business is booming in Isis. For theft of goods worth more than $40 (£28), a hand is cut off. $40 is the price of a gram of gold. Christians have to pay jizya, a protection tax. Muslims pay a zakat, or religious tax, based on their assets. At the moment, Isis finances itself mostly through assets seized in war, sales of oil and the zakat. It is already dark when we arrive in Raqqa. Tomorrow we’re supposed to be going to Mosul. How ISIS Built the Machinery of Terror Under Europe’s Gaze. The Isis papers: leaked documents show how Isis is building its state. A leaked internal Islamic State manual shows how the terrorist group has set about building a state in Iraq and Syria complete with government departments, a treasury and an economic programme for self-sufficiency, the Guardian can reveal. 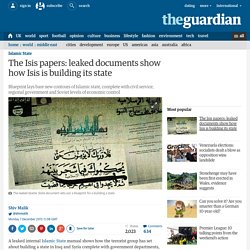 Telling the Truth About ISIS and Raqqa. On Saturday night, five young Syrians slouched into a dive bar in New York and ordered drinks. 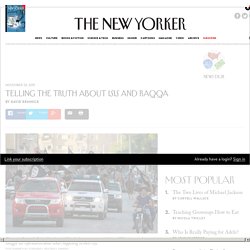 When the bartender asked if off-brand vodka was O.K., they had to smile. Why ISIS Looks Very Different Today Than A Month Ago : Parallels. An Islamic State supporter waves the group's flag in its de facto capital of Raqqa, Syria, in June 2014. 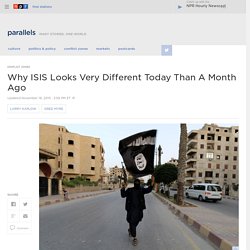 The group had focused on building its caliphate, or Islamic empire, in the Middle East. But it has claimed three major attacks recently, leading to a reassessment of the group and its goals. STRINGER/Reuters/Landov hide caption toggle caption STRINGER/Reuters/Landov. The Georgian roots of Isis commander Omar al-Shishani. Omar al-Shishani may now be one of the most feared jihadists in the Middle East, as a commander in the al-Qaeda-affiliated Islamic State of Iraq and the Levant (Isis), but his early life was very different. 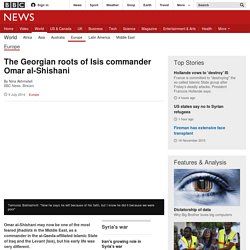 He was born Tarkhan Batirashvili and grew up in Georgia's picturesque Pankisi Gorge. He lived in the village of Birkiani, where his father, a Christian, still lives in a small, simply-furnished house. The jihad in Syria and Iraq was not Shishani's first experience with combat. He previously served with the Georgian army during the war with Russia in 2008. Tinderbox But when he became ill and was dismissed from the army, things started to go wrong, Teimuraz Batirashvili says. He found it hard to get work and was arrested after a raid on his house. "One night a terrible noise woke me up - someone was banging at the door. "A policeman called me over and took a box full of ammunition out from under it.

Shishani was reportedly accused of storing the ammunition. Family photos removed Cut off. The Secret Life of an ISIS Warlord. Abu Omar al-Shishani has a fierce, gorgeous Chechen bride. 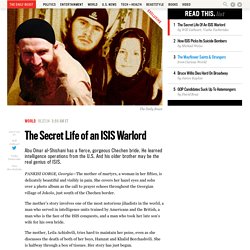 He learned intelligence operations from the U.S. ‘Star pupil': Pied piper of ISIS recruits was trained by U.S. Abu Omar al-Shishani, a former American-trained noncommissioned officer in the special forces of the nation of Georgia, is now the most important non-Arab figure in the Islamic State group hierarchy. 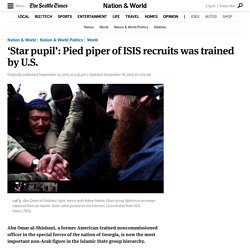 KILLIS, Turkey — The 15 Chechens looking to cross the border from Turkey to Syria didn’t strike Abdullah as particularly important or unusual. It was early summer in 2012, and as a smuggler based in the Turkish border town of Killis, Abdullah, who’d fled his home village in Syria because of fighting on the outskirts of Aleppo, was used to secretive groups of foreigners — journalists, aid workers and many recently aspiring jihadists — hiring him to cross Turkish military lines at the border while avoiding what was then still a significant Syrian government presence in northern Syria. The 15 men had reached Abdullah through a network of contacts that were funneling new fighters to northern Syria, and Abdullah recalled they said they were going to Syria to assist in the fight against Assad. How ISIS Expanded Its Threat. The Islamic State has demonstrated a worldwide reach. 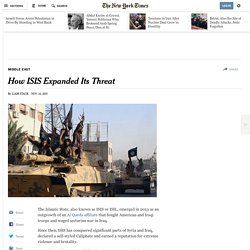 Using social media prowess, it recruits fighters and supporters, primarily young people, from around the world. It has also drawn pledges of support or allegiance from about three dozen jihadist groups in at least 18 different countries. Earlier this month, an ISIS affiliate in Egypt claimed responsibility for an explosion that took down a Russian passenger jet leaving the resort city of Sharm el-Sheikh, killing 224. The Rise of ISIS.