Iraqi Journalist Who Embedded with Shia Militias on Fighting ISIS & Why US Strategy is Bound to Fail. This is a rush transcript. 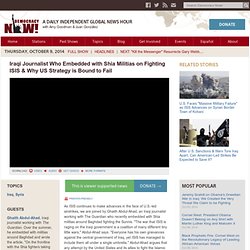 Copy may not be in its final form. AMY GOODMAN: We continue our conversation with Patrick Cockburn of The Independent, his new book, The Jihadis Return: ISIS and the New Sunni Uprising, joining us from London; and Ghaith Abdul-Ahad, Iraqi journalist working with The Guardian, who was awarded the Orwell Prize for Journalism this year for his coverage of the war in Syria. Eyes Finally Open to Syrian Realities. Exclusive: For the past three years, Official Washington has viewed the Syrian civil war as “white-hatted” rebels against “black-hatted” President Assad, but finally some of the “gray-hatted” reality is breaking through, though perhaps too late, Robert Parry reports. 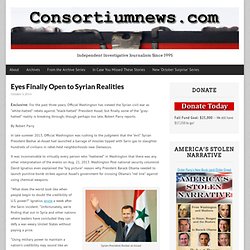 By Robert Parry In late summer 2013, Official Washington was rushing to the judgment that the “evil” Syrian President Bashar al-Assad had launched a barrage of missiles tipped with Sarin gas to slaughter hundreds of civilians in rebel-held neighborhoods near Damascus. It was inconceivable to virtually every person who “mattered” in Washington that there was any other interpretation of the events on Aug. 21, 2013. Washington Post national security columnist David Ignatius even explained the “big picture” reason why President Barack Obama needed to launch punitive bomb strikes against Assad’s government for crossing Obama’s “red line” against using chemical weapons. Syrian President Bashar al-Assad. Syrian Kurds plea for help defending Kobani from Isis advance. Syrian Kurds have issued a desperate call for western powers and their own kin to rally to the defence of the city of Kobani, which appears closer than ever to falling in the face of a sustained barrage from Islamic State militants. 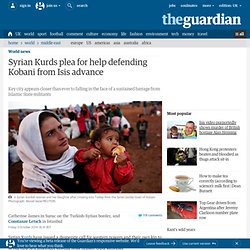 The city, one of the largest Kurdish bastions of resistance to Isis in northern Syria, was shaken by heavy shelling from the advancing militants at dusk on Friday, sending plumes of smoke skywards and more refugees scrambling across the border into Turkey. Isis fighters are believed to be inside the eastern part of the city now, where some of the heaviest clashes are reverberating. Jeremy Scahill on Obama’s Orwellian War in Iraq: We Created the Very Threat We Claim to be Fighting. This is a rush transcript. 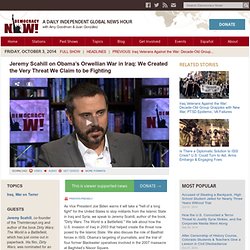 Copy may not be in its final form. AMY GOODMAN: Vice President Joe Biden said Thursday it will take a, quote, "hell of a long fight" for the United States and its allies to stop the advance of militants from the Islamic State in Iraq and Syria. INTELWIRE.com. Seven Flaws In the U.S. Strategy to Counter ISIS. (Editor's Note: This blog post is derived from Clint Watts' Ginsburg Lecture delivered at the National Liberty Museum on September 16, 2014.) 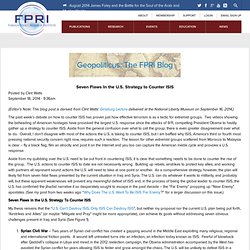 The past week’s debate on how to counter ISIS has proven just how effective terrorism is as a tactic for extremist groups. Two videos showing the beheading of American hostages have provoked the largest U.S. response since the attacks of 9/11, compelling President Obama to hastily gather up a strategy to counter ISIS. Aside from the general confusion over what to call the group, there is even greater disagreement over what to do. U.S. combat role in Iraq not off table, Gen. Dempsey says. The Fake Terror Threat Used To Justify Bombing Syria. As the Obama Administration prepared to bomb Syria without congressional or U.N. authorization, it faced two problems. 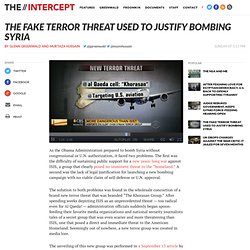 The first was the difficulty of sustaining public support for a new years-long war against ISIS, a group that clearly posed no imminent threat to the “homeland.” A second was the lack of legal justification for launching a new bombing campaign with no viable claim of self-defense or U.N. approval. The solution to both problems was found in the wholesale concoction of a brand new terror threat that was branded “The Khorasan Group.”

After spending weeks depicting ISIS as an unprecedented threat — too radical even for Al Qaeda! U.S. Suspects More Direct Threats Beyond ISIS. Photo WASHINGTON — As the United States begins what could be a lengthy military campaign against the Islamic State, intelligence and law enforcement officials said another Syrian group, led by a shadowy figure who was once among Osama bin Laden’s inner circle, posed a more direct threat to America and Europe. 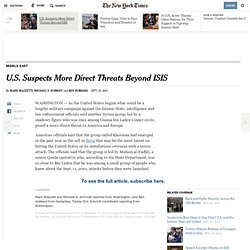 American officials said that the group called Khorasan had emerged in the past year as the cell in that may be the most intent on hitting the United States or its installations overseas with a terror attack. The officials said that the group is led by Muhsin al-Fadhli, a senior Qaeda operative who, according to the State Department, was so close to Bin Laden that he was among a small group of people who knew about the Sept. 11, 2001, attacks before they were launched. A Terror Cell That Avoided the Spotlight. Continue reading the main story Video WASHINGTON — Some time last year, a Kuwaiti man in his early 30s who had spent more than a decade hiding from the American government arrived in northwest , where he met up with other members of who had begun putting down roots in a country torn by two years of death and chaos. 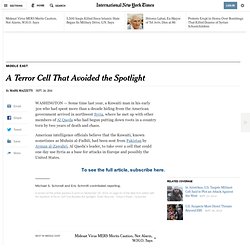 American intelligence officials believe that the Kuwaiti, known sometimes as Muhsin al-Fadhli, had been sent from by , Al Qaeda’s leader, to take over a cell that could one day use Syria as a base for attacks in Europe and possibly the United States. Unlike other jihadist groups that have come to prominence in recent years, the cell that Mr. Fadhli came to lead — known within intelligence and law enforcement agencies as the Khorasan Group — avoided the spotlight.

Enterprise: al-Qaida's Syrian cell alarms US. WASHINGTON (AP) — While the Islamic State group is getting the most attention now, another band of extremists in Syria — a mix of hardened jihadis from Afghanistan, Yemen, Syria and Europe — poses a more direct and imminent threat to the United States, working with Yemeni bomb-makers to target U.S. aviation, American officials say. 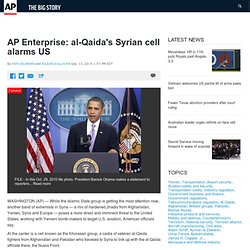 At the center is a cell known as the Khorasan group, a cadre of veteran al-Qaida fighters from Afghanistan and Pakistan who traveled to Syria to link up with the al-Qaida affiliate there, the Nusra Front. But the Khorasan militants did not go to Syria principally to fight the government of President Bashar Assad, U.S. officials say. White House exempts Syria airstrikes from tight standards on civilian deaths. Residents inspect damaged buildings in what activists say was a U.S. strike in Kafr Daryan, in Syria's Idlib Province, … The White House has acknowledged for the first time that strict standards President Obama imposed last year to prevent civilian deaths from U.S. drone strikes will not apply to U.S. military operations in Syria and Iraq. 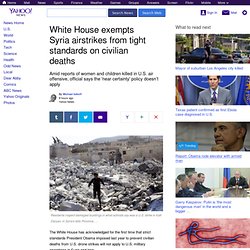 A White House statement to Yahoo News confirming the looser policy came in response to questions about reports that as many as a dozen civilians, including women and young children, were killed when a Tomahawk missile struck the village of Kafr Daryan in Syria's Idlib province on the morning of Sept. 23. The village has been described by Syrian rebel commanders as a reported stronghold of the al-Qaida-linked Nusra Front where U.S officials believed members of the so-called Khorasan group were plotting attacks against international aircraft.