How ISIS nearly stumbled on the ingredients for a ‘dirty bomb’ On the day the Islamic State overran the Iraqi city of Mosul in 2014, it laid claim to one of the greatest weapons bonanzas ever to fall to a terrorist group: a large metropolis dotted with military bases and garrisons stocked with guns, bombs, rockets and even battle tanks. 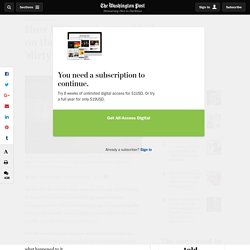 But the most fearsome weapon in Mosul on that day was never used by the terrorists. Only now is it becoming clear what happened to it. Locked away in a storage room on a Mosul college campus were two caches of cobalt-60, a metallic substance with lethally high levels of radiation. When contained within the heavy shielding of a radiotherapy machine, cobalt-60 is used to kill cancer cells.

In terrorists’ hands, it is the core ingredient of a “dirty bomb,” a weapon that could be used to spread radiation and panic. Western intelligence agencies were aware of the cobalt and watched anxiously for three years for signs that the militants might try to use it. [ISIS use of weaponized drones spurs terrorism fears] Hidden away. Parents wish deadbeat son would join ISIS already. 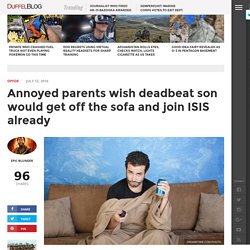 MOSUL, Iraq — Grumbling indiscernibly and exchanging telling glares, local parents Hamza and Fatima Abadi expressed for the thousandth time their desire for the household’s resident couch potato to “go out and do something already.” “Maybe join ISIS,” Hamza added. “He hasn’t moved in seven hours,” says Fatima, whose unconditional, maternal love died long ago, sources report. Turkey Goes to War. “ISIS threatens our way of life and security…We have plans to act militarily against them in the coming days. 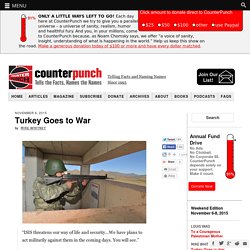 You will see.”— Turkish Foreign Minister Feridun Sinirlioğlu A landslide victory in Turkey’s November 1 snap elections has removed the last obstacle in President Recep Tayyip Erdoğan’s drive to war. The surprise outcome of the balloting, which was widely denounced as “unfair and marred by fear and violence by international election observers”, has given Erdogan’s Justice and Development Party (AKP) 49 percent of the vote restoring single-party rule in Ankara. Shortly after the election results were announced, Prime Minister Ahmet Davutoglu called on Turkey’s political parties to scrap the existing constitution in order to grant President Erdogan nearly-limitless executive authority. In other words, the balloting is being used to sabotage democracy and establish the supreme power of the president. Why has Obama “authorized further activities to secure the rest”? Stephen Colbert mocks GOP for believing ISIS can be defeated with the power of make-believe.

By Scott KaufmanFriday, August 29, 2014 7:28 EDT On Thursday night’s episode of The Colbert Report, Stephen Colbert mocked conservatives for living in a world of imagination on the subject of the threat posed by ISIS. 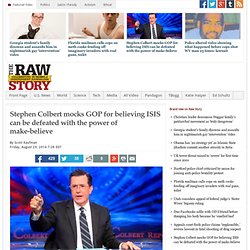 He began by angrily pointing at a photograph of President Barack Obama and saying, “this guy right here needs a hard dose of reality — right, woman who lives in a world of imagination?” Colbert then cut to a female Fox News personality, who said, “Can I just make a special request from a magic lamp? Can we get, like, Netanyahu and Putin in for, like, 48 hours as head of the United States? What to Do About ISIS. Start by recognizing where ISIS came from. 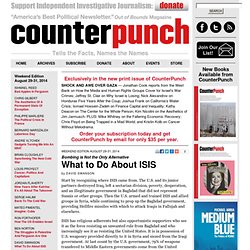 The U.S. and its junior partners destroyed Iraq, left a sectarian division, poverty, desperation, and an illegitimate government in Baghdad that did not represent Sunnis or other groups. Then the U.S. armed and trained ISIS and allied groups in Syria, while continuing to prop up the Baghdad government, providing Hellfire missiles with which to attack Iraqis in Fallujah and elsewhere. ISIS has religious adherents but also opportunistic supporters who see it as the force resisting an unwanted rule from Baghdad and who increasingly see it as resisting the United States. It is in possession of U.S. weaponry provided directly to it in Syria and siezed from the Iraqi government. At last count by the U.S. government, 79% of weapons transfered to Middle Eastern governments come from the United States, not counting transfers to groups like ISIS, and not counting weapons in the possession of the United States.

Found: The Islamic State's Terror Laptop of Doom. Keith Alexander, the recently retired director of the National Security Agency, left many in Washington slack-jawed when it was reported that he might charge companies up to $1 million a month to help them protect their computer networks from hackers. 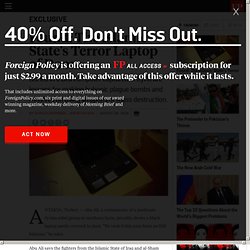 What insights or expertise about cybersecurity could possibly justify such a sky-high fee, some wondered, even for a man as well-connected in the military-industrial complex as the former head of the nation's largest intelligence agency? The answer, Alexander said in an interview Monday, is a new technology, based on a patented and "unique" approach to detecting malicious hackers and cyber-intruders that the retired Army general said he has invented, along with his business partners at IronNet Cybersecurity Inc., the company he co-founded after leaving the government and retiring from military service in March.

But Alexander started his company almost immediately after stepping down from the NSA. "We've got a great solution.