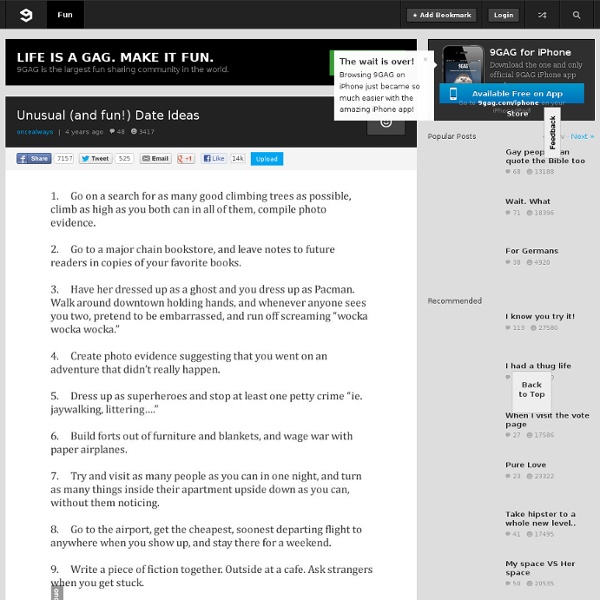 The 50 Best Films of the 2000s « Febriblog? The Best Films of the 2000s. A list like this is rather ridiculous to make at such a time, as reading other’s lists compulsively has simply made me seek out dozens of other films I’ve either never heard of, or have yet to get around to. Plus, it in no way factors in other films from this year even, ones that haven’t even seen a proper distribution yet, never mind foreign films that won’t see the light of day for another 2 years likely. So really, what I’m saying is, I probably should have waited to make this epic list until, oh, 2014. But I’ve got the bug, so here goes, just keep in mind that A.) It is in no way definitive, and is subject to change at any given notice, and B.) How to Make Office Weapons Out of Office Supplies Wow, if you thought working at your white-collared job, sitting in your well equipped air-conditioned office, thinking that this is probably one of the safest place to be… you may just want to think twice about that. The office is a jungle. Beside having to watch your back against office colleagues who may be wolf in sheep’s clothes, you may just have to watch out for those seemingly utilitarian office supplies, because in conjuncture with other seemingly innocent office supplies, they may just result to be one of the deadliest office weapon yet. Below is an example of our favorite office supplies- binder clips, turned into office weapons. Take a few binder clips of varying sizes, turn them upside down, and clip the smaller binder clips inside the larger clips.

The Webtender: Drinking Games. Have fun with The Webtender's collection of drinking games, but be extremely careful if you play any these games, especially the ones with high buzz factors. The collection was created as an aid to responsible adults who know their limits (and not to cross them) when it comes to drinking, and not to promote this kind of drinking behavior. You should of course be of legal drinking age if you want to play these games with beer or drinks, but anyone can play these games with non-alcoholic beverages as well. For more fun, visit the Web Site Index and go to one of the sites listed there. You should also take a look at 'The Complete Book of Beer Drinking Games'.

25 Most Romantic Movie Quotes It's Valentine's Day, so it seemed appropriate to gather the most romantic movie lines of all time -- from "Casablanca" to "Four Weddings and a Funeral" to, of course, "The Notebook." "The Notebook" (2004) "So it's not gonna be easy. It's gonna be really hard. We're gonna have to work at this every day, but I want to do that because I want you.

10 great science fiction novels that have been banned @djscruffy: And that's why you're a heathen and should be burned at the stake. @djscruffy: In defense of public schools, I would suggest that the reason many of these books are challenged so often is that they're frequently included in school curriculums and libraries. I grew up in a state that, according to these links, engaged in book-burning less than a decade before my birth. That makes me shudder.