20 fantastic ways to find new music that you like (no Last.fm & Pandora inside) 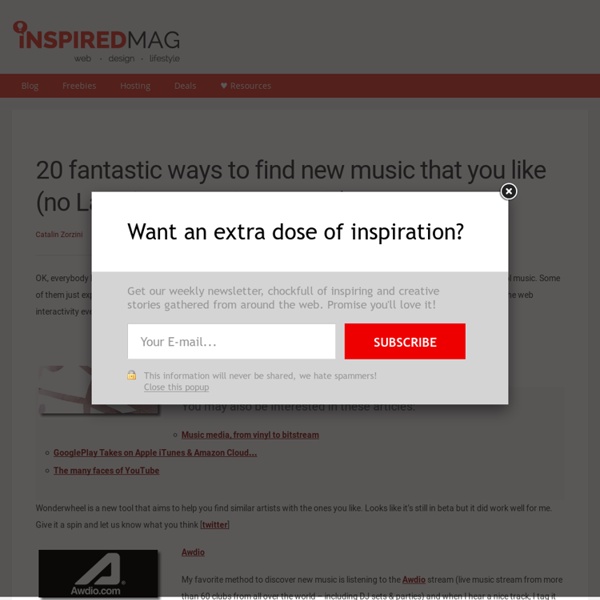 OK, everybody knows that Last.fm & Pandora are great services, but there are a lot of other tools that can help us to find new cool music. Some of them just expose daily musical goodies, others make recommendations based on your very own preferences, and others take the web interactivity ever further. Explore the best 20 ways to discover new music in a web 2.0 world. Live music discovery Wonderwheel Wonderwheel is a new tool that aims to help you find similar artists with the ones you like. Awdio My favorite method to discover new music is listening to the Awdio stream (live music stream from more than 60 clubs from all over the world – including DJ sets & parties) and when I hear a nice track, I tag it with Shazam (explained below) to find out what tune is it. Shazam Shazam gives instant satisfaction for those times when you want to know the song that is playing, learn more about the artist, buy the song immediately – or simply share your discovery with your friends. iLike The Filter Mog

25 Killer Websites that Make You Cleverer It’s easy to forget that we have access to a virtually limitless resource of information, i.e. the Internet. For a lot of us, this is even true at our fingertips, thanks to the ubiquity of smartphones and an ever-increasing push for online greatness by tech engineers all over the world. As a result, there are countless websites out there that are geared to make you smarter and more brilliant for either a low or no cost. Here are just 25 killer websites that may just make you more clever than ever before. 1. Playlist - The Perfect House Party Playlist: Pre-Drunk Rock To Hip Hop The name pretty much says it all. If you have a house party, this is perfect. You start the list around 9-10ish before people get any spirits in them and the party is bustling. The Music transitions from rock and music you can talk behind quickly to more energetic classic and modern rock. After that, it transitions to dance music with a few good drunk singalongs thrown in.

For VE Day, Watch This Technicolor Film of Berlin, Two Months After World War II On the 70th anniversary of VE Day, a remarkable film shows Berliners cleaning up a city in ruin. These days, Berlin is a nexus of 21st-century cool. New York magazine recently called it the “post-tourist capital of Europe,” capturing the trend of younger visitors coming for multi-month stays, drawn by its surplus of affordable housing, dining, and culture. In the wake of a uniquely tumultuous century for the city, Berlin has captured the world’s imagination in a way that would have been unthinkable just 15 years ago. But its scars are still visible. IQ Test (Intelligence Test). More than 50 Intelligence Tests for all ages Have you ever asked yourself, what it intelligence? Intelligence can be described as the ability to have skills, necessary to face the requirements and challenges, which man is daily confronted with. According to the Webster’s Dictionary, “intelligence is a capacity to perceive and comprehend meaning, information, news”. Nowadays a new, more complex and extensive conception of intelligence has been developed, and the determination can be simply expressed as: Intelligence is a skill to solve complex problems in the changing circumstances. One cannot say, that IQ = Intelligence, because not all the aspects of the intelligence can be reliably measured.

The Ultimate Road Trip Playlist — 50 Best Road Trip Songs  No road trip is complete without a playlist of songs that capture the spirit of traveling on the open road. So we’ve compiled a list of the 50 best road trip songs . In order to make this be-all end-all totally definitive list that all other lists look up to, the songs had to meet the following criteria: a.) encompass the excitement and freedom of road tripping 100 Best (Free) Science Documentaries Online No matter how much you know, there is always something new to learn about science. While your college courses may cover the basics, you can get a more in-depth look at a wide variety of topics from Internet resources such as these great documentaries. These selections will help you explore everything from the inner reaches of the human mind to the outer areas of our universe and just about everything else in between.

Optical Illusions, Videos, Images, Brain Teasers and more! Good Morning and Happy Monday to everyone! Hope the weekend was good and you had a Happy Father’s Day! Today’s optical illusion is remarkable one because it is going to force anyone that sees it to really look at it and use their imagination! So, what do you all see because you are supposed to see a Native American sitting on a horse right next to his village, and there is a beautiful rainbow overhead, which really adds something to the picture. However, that is not all that people are going to see, and their eyes and brain are immediately going to take this picture and start seeing other things in it. There is one very obvious animal in this picture, but the others are not so easy to find, but oh the fun you are going to have trying to find all the animals, and good luck finding them!

Metroactive Music Out of the Back Room: Gerry Goffin Legendary lyricist Gerry Goffin resurfaces with 'Back Room Blood' By Nicky Baxter FOR THOSE OF US who presumed that songwriter-turned-singer Gerry Goffin, now 50, had either died or disappeared from the planet, Back Room Blood (Adelphi/Genes) gives evidence of a welcome rejuvenation.