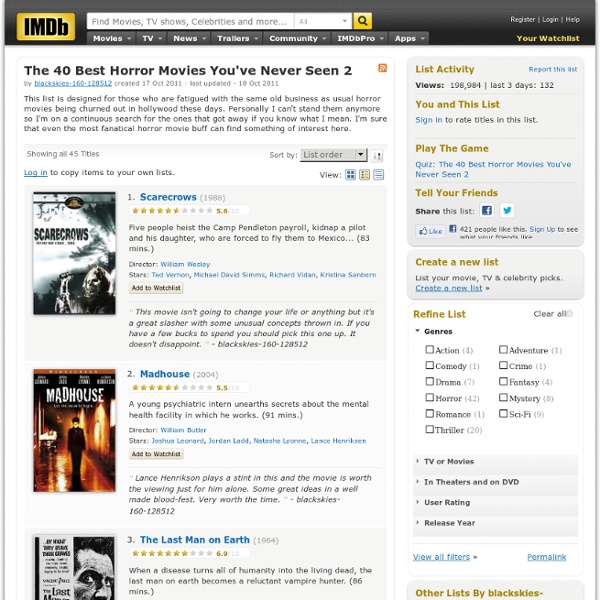 Supernatural Wiki - Super-wiki Halloween Caverns Of Blood presents Halloween and Horror games Top 25 Horror Movies of 2009 The Definitive List By now you should have probably noticed a ton of Top Lists for 2009 on site written by the staff members of our site. To give you an objective overview of what the top films of 2009 really were I have taken all the Top Lists written by the staff and compiled them into one master list. I have also include the votes of our readers to make this list as accurate as possible. So without further ado here is the Definitive List of the Best Horror Films of 2009. If you have not seen any of these films.. you need to. As far as our staff and the readers of our site are concerned these horror movies are the cats ass! #25: Last House on the Left Remake: Quite honestly all things considered I really do not disagree with the choice of Last House on the Left landing at #25 on our Top 25 since it was both disturbing and dark. #22 Cold Prey: Cold Prey teaches the cold lessons of why you don’t want to go skiing in the alps… especially not to an abandoned ski lodge now inhabited by a psychopath.

The Ten Best Horror Movies You Haven’t Seen | October means Halloween, and Halloween means horror, and horror? Well that means some damn good movies. I presume many of you are searching for a good horror flick to curl up with this month, and while I will advise you to first consult my 10 Best Horror Films of Decade list, I thought I’d compile a new one made up of films that aren’t quite as widely known. Yes, I love The Ring, The Orphanage and The Descent, but there are smaller, more niche movies that are deserving of your attention, and really, once you’ve been scared or grossed out once, it’s not quite the same if you watch the same film again. Here are some new titles that some of you may have seen, but I predict most of you will have not. 10. If you’re not in love with Amber Heard yet, watch Drive Angry, Zombieland or better yet, All the Boys Love Mandy Lane. It’s a fairly straightforward slasher film, but with a few clever twists thrown in, it stands out over similar films. 9. 8. 7. 6. 5. 4. 3. 2. 1. Bonus: Tucker and Dale vs.

Werewolf Legends from Germany translated and edited by D. L. Ashliman University of Pittsburgh © 1997-2010. Contents Return to D. The Morbach Monster Anonymous Have you ever heard of the Morbach Monster? I first learned of the legend while I was stationed at Hahn Airforce Base, Germany. Supposedly Wittlich is the last town where a werewolf was killed. One night a group of security policemen were on the way to their post at Morbach, when they noticed that the candle was out at the shrine, and all joked about the monster. Later that night alarms were received from a fence-line sensor. This occured around 1988. There have always been "ghost" stories dreamed up by bored security policemen, but this is one I have heard over and over again. Source: E-mail, dated October 6, 1997, to D. The Werewolf F. By using a so-called wolf strap, any person could transform himself into a werewolf. In earlier times there were a great many such straps, but today, along with the wolves, they seem to have been banned to Russia. Source: F. A.