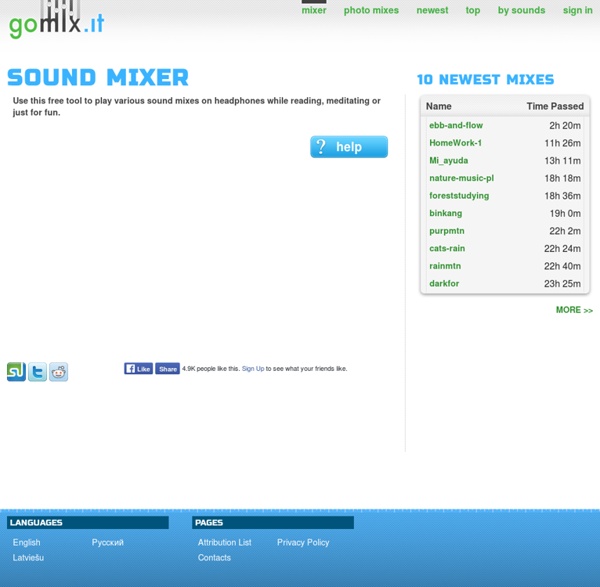 Ian's Naturism “When all is said and done, there’s nothing quite like knocking about naked in your own home!” ― Ian Fan Club Members, click on the image to see the whole Gallery. Click here if you fancy joining the ‘Ian’s Naturism Fan Club’ while I’m away!

Antares Auto-Tune Evo Pitch Correcting Plug-In Click image to view full size version The Worldwide Standard in Affordable Professional Pitch Correction If you need Auto-Tune's world standard pitch correction, but not Auto-Tune 7's time manipulation or other new features (click here for a quick comparison of Auto-Tune features), then Auto-Tune Evo is the plug-in for you. It gives you all the power and sonic goodness of Auto-Tune's full-featured Automatic and Graphical pitch correction, pitch shifting and throat modeling, at an attractively affordable price. Core Functions Writing a Novel Using the Snowflake Method There are several versions of the Snowflake Method to writing a novel. My personal favorite is Randy Ingermanson’s version on his website, AdvancedFictionWriting.com. I strongly suggest reading Ingermanson’s page on the Snowflake Method if you are about to put it into practice. I based my version largely on Ingermanson’s, but being a visual learner and thinker, I tried to make it more of a visual illustration. I also use medium sized, color-coded note cards for step 9, again, because I am more visual and like to play with colored paper and pens.

EQ Chart « ObiAudio This is from a thread on Future Producers..I did not write this and do…to an extent…agree with most of this. I just copied and pasted the good stuff: To understand EQ and its intricacies you need hands-on experience, but to help you get started, here’s a table of general uses and the different ranges that EQ can affect. As every sound is different, though, these are necessarily very general guidelines… Kick Drum Parents protest LA Unified's English learner policy A group of parents protested outside Los Angeles Unified school board member Tamar Galatzan's office Friday, objecting to the district's policy of putting English-Learners in a specialized class. "It’s almost like instead of taking a step forward we are taking three steps back, because this is the way it used to be before," said Cindy Aranda-Lechuga, whose child goes to Granada Hills Elementary Community Charter School. She said it reminds her of segregated schools. She and other parents said they were recently informed by their school that children classified as English Learners must be grouped. They said change would be disruptive now, months into the school year.

ZED60-10FX - Allen & Heath Live or in the studio, ZED60-10FX is an ultra-portable mixer for solo artists and small bands. Based on our top selling ZED-10FX, the new ZED60-10FX adds premium quality 60mm faders for that intuitive, tactile mixing experience. This mixer is a guitarist’s dream. Two of the 4 mono channels have high impedance jack inputs that can take a normal line level or a low level input from a guitar pickup, so guitars can be plugged straight into the mixer without the need for DI boxes. These inputs have been crafted to recreate the sound of a classic tube preamp in a combo or head amp for incredible definition and warmth. Two stereo inputs are provided for MP3/CD players or keyboards.

Kay Nielsen’s Stunning 1914 Scandinavian Fairy Tale Illustrations By Maria Popova As a lover of illustrated fairy tales and having just returned from Sweden, I was delighted to discover, thanks to the relentlessly wonderful 50 Watts, East of the Sun and West of the Moon: Old Tales from the North (public library; public domain) — a collection of Scandinavian fairy tales, illustrated by Danish artist Kay Rasmus Nielsen (1886-1957), whose work you might recall from the all-time greatest illustrations of Brothers Grimm and the fantastic visual history of Arabian Nights. Originally published in 1914, this magnificent tome of 15 stories was recently reissued by Calla Editions, the same Dover imprint that revived Harry Clarke’s magnificent illustrations for Edgar Allan Poe, and features 25 color illustrations, along with a slew of black-and-white ones, in Nielsen’s singular style of haunting whimsy. ↬ 50 Watts

Free Music Software Utami, the creators of RokVid and Geisterwelt for Ableton Live, have released Motion – a motion-tracking plugin for Live – as a free download. Continue reading Propellerhead has released Take 2.0, a major update to its free vocal recorder for iPhone. Here’s what’s new in Take 2.0: Continue reading Apex Audio has released a free plugin, for Mac & Windows, Haa5. Haa5 uses stereo delays to create what is known as the “precedence effect”, also known as the “Haas effect” after Helmut Haas, whose 1949 Ph.D. thesis first described this psycho-acoustic phenomenon. Gadsby f youth, throughout all history, had had a champion to stand up for it; to show a doubting world that a child can think; and, possibly, do it practically; you wouldn’t constantly run across folks today who claim that “a child don’t know anything.”A child’s brain starts functioning at birth; and has, amongst its many infant convolutions, thousands of dormant atoms, into which God has put a mystic possibility for noticing an adult’s act, and figuring out its purport. Up to about its primary school days a child thinks, naturally, only of play. But many a form of play contains disciplinary factors. “You can’t do this,” or “that puts you out,” shows a child that it must think, practically or fail. Now, if, throughout childhood, a brain has no opposition, it is plain that it will attain a position of “status quo,” as with our ordinary animals. But a human brain is not in that class.

Create Music Beats - The online music factory - Jam, remix, chords, loops JamStudio for 2021! Download the Windows App or Mac App to keep using JamStudio! DO IT NOW! This app will work after Flash is removed from browsers in 2021!