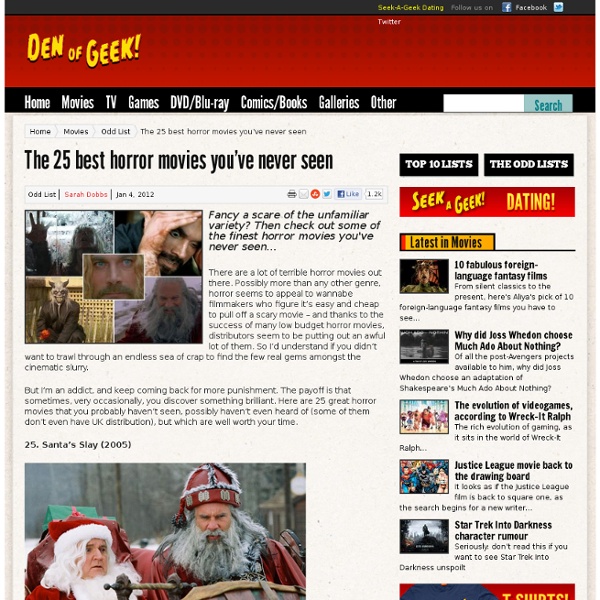 There are a lot of terrible horror movies out there. Possibly more than any other genre, horror seems to appeal to wannabe filmmakers who figure it’s easy and cheap to pull off a scary movie – and thanks to the success of many low budget horror movies, distributors seem to be putting out an awful lot of them. So I’d understand if you didn’t want to trawl through an endless sea of crap to find the few real gems amongst the cinematic slurry. But I’m an addict, and keep coming back for more punishment. The payoff is that sometimes, very occasionally, you discover something brilliant. Here are 25 great horror movies that you probably haven’t seen, possibly haven’t even heard of (some of them don’t even have UK distribution), but which are well worth your time. 25. Let’s start with a festive one, seeing as Christmas as just gone. There’s plenty of festive murder, a lovely animated section featuring angels and devils holding a curling match, and a wonderful showdown at an ice rink. 24. 23. 9. Related:  lists (must watch listen etc)

Horror Posters #50-99 Horror Posters ? Next 10 great science fiction novels that have been banned @djscruffy: And that's why you're a heathen and should be burned at the stake. @djscruffy: In defense of public schools, I would suggest that the reason many of these books are challenged so often is that they're frequently included in school curriculums and libraries. I grew up in a state that, according to these links, engaged in book-burning less than a decade before my birth. I suppose I've wandered a bit. @djscruffy: To be fair, it's not usually the schools that want to ban the books, but the few overprotective parents who make wild assumptions about the books we try to teach. Most of us really try to teach the kids to think, rather than becoming nice little automatons.

The 50 Best Films of the 2000s « Febriblog? The Best Films of the 2000s. A list like this is rather ridiculous to make at such a time, as reading other’s lists compulsively has simply made me seek out dozens of other films I’ve either never heard of, or have yet to get around to. Plus, it in no way factors in other films from this year even, ones that haven’t even seen a proper distribution yet, never mind foreign films that won’t see the light of day for another 2 years likely. So really, what I’m saying is, I probably should have waited to make this epic list until, oh, 2014. But I’ve got the bug, so here goes, just keep in mind that A.) (Oh, and I expect plenty of discourse here… Do your worst.) 50. Dir. To kick things off in a massive list such as this, I usually like to pick a wild card, if you will, for the lead-off spot. 49. Dirs. I emphatically cannot stand the music of Metallica. 48. Dir. 47. Dir. 46. Dir. Alfonso Cuarón had a spectacular decade. 45. Dir. 44. Dir. You want to know how difficult this film is? 43. Dir.

Top 100 Best Acoustic Songs Ever -The Greatest of All Time | Acoustic Guitar Music | TopAcousticSongs.com Here is a list of the best acoustic songs ever written. Acoustic music has come a long way over the years, so many are “oldies” and many are “newies.” We are basing this list off of historical album sales, the ever so objective factor of acoustic-ness, but mostly how easily they make us cry. They are mostly arranged in alphabetical order, by song – so make sure you check out the whole list! Feel free to give your input on suggestions, changes, discards, or songs we may have forgot about. Also, for those interested in a serious path to learning guitar, please see our trusted partner, Guitar Tricks: Click the links to listen to the songs. Listen 1-9 Listen 10-19 Listen 20-29 Listen 30-39 Listen 40-49 Listen 50-59 Listen 60-69 Listen 70-79 Listen 80-89 Listen 90-100 **ALPHABETICAL ORDER (Roughly)** 1. 3 AM – Matchbox 20 2. 10,000 Stones – Adrianne 3.