The 100 Most Influential Books Ever Written (book) 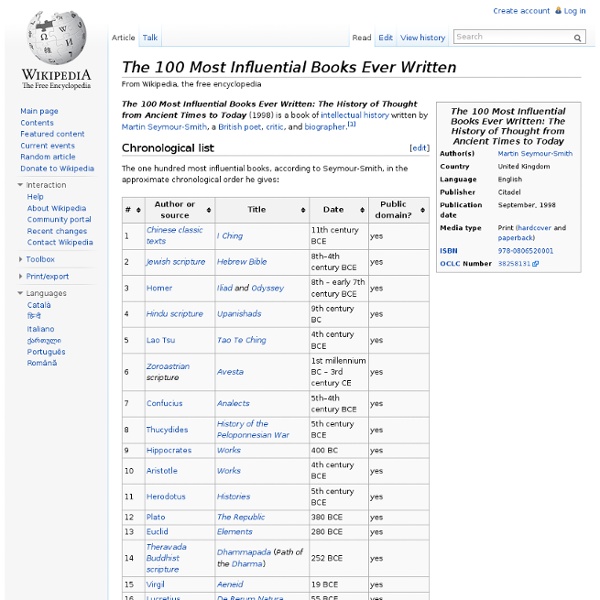 The 100 Most Influential Books Ever Written: The History of Thought from Ancient Times to Today (1998) is a book of intellectual history written by Martin Seymour-Smith, a British poet, critic, and biographer.[1] The list included the books such as, Upanishads, Hebrew Bible, I Ching, Kabbalah, Candide, The World as Will and Idea, among others. See also[edit] References[edit] Jump up ^ Seymour-Smith, Martin (1998). External links[edit] The list

Famous Last Words: Our 20 Favorite Final Lines in Literature Endings, as we all know, are important. An entire novel can be ruined by a disappointing ending, but by the same token, an entire novel can be made by a wonderful one. We’ve already given you a rundown of our favorite opening lines in literature, but since every beginning needs an ending (and you’d be surprised at how many works with awesome first lines also have awesome last lines – or perhaps you wouldn’t be surprised), we feel compelled to treat you to a list of our favorite last lines as well. 1. Best pessimistic diagnosis of a resigned and wistful generation: “Yes,” I said. 2. Most delicate ending to a delicate, harrowing story about the different kinds of humanity and grace: “Shut up, Bobby Lee,” The Misfit said. 3. Best reason to go adventuring in Wonderland: 4. Most dearly held last line for moody and secretive teenagers everywhere: Don’t ever tell anybody anything. 5. “You can trust me,” R.V. said, watching her hand. 6. 7. 8. “No got… C’lom Fliday” 9. 1984, George Orwell 10. 11.

75 Books Every Writer Should Read Whether you want to make writing your career or just want to know how to improve your writing so that you can pass your college courses, there is plenty of reading material out there to help you get inspired and hone your skills. Here’s a collection of titles that will instruct you on just about every aspect of writing, from the basics of grammar to marketing your completed novel, with some incredibly helpful tips from well-known writers themselves as well. Writing Basics These books address things like structure, plot, descriptions and other basic elements of any story. The Power of Myth by Joseph Campbell and Bill Moyers: You can improve the quality of your writing by adding a mythical quality to them with advice and insight from this book. Writer’s Journey: Mythic Structure for Writers by Christopher Vogler: Whether you agree with the ideas in this book or not, you’ll find it a useful and informative read for writing. Advice from Authors Improving Your Writing Grammar Reference Books

10 great science fiction novels that have been banned @djscruffy: And that's why you're a heathen and should be burned at the stake. @djscruffy: In defense of public schools, I would suggest that the reason many of these books are challenged so often is that they're frequently included in school curriculums and libraries. I grew up in a state that, according to these links, engaged in book-burning less than a decade before my birth. I suppose I've wandered a bit. @djscruffy: To be fair, it's not usually the schools that want to ban the books, but the few overprotective parents who make wild assumptions about the books we try to teach. Most of us really try to teach the kids to think, rather than becoming nice little automatons.

100 Best Books of All Time The World Library is a list of the 100 best books, as proposed by one hundred writers from fifty-four different countries, compiled and organized in 2002 by the Norwegian Book Club. This list endeavours to reflect world literature, with books from all countries, cultures, and time periods. Eleven of the books included on the list are written by women, eighty-five are written by men and four have unknown authors. Each writer had to select his or her own list of ten books. The books selected by this process and listed here are not ranked or categorized in any way; the organizers have stated that "they are all on an equal footing," with the exception of Don Quixote which was given the distinction "best literary work ever written." Fyodor Dostoevsky is the author with the most books on the list, with four. List of the 100 Best Books of All Time[edit] List of Authors Surveyed[edit] See also[edit] References[edit] External links[edit]

11 Literary References People Make Without Realizing It But I made the category for a reason -- to class up this joint -- so I'm sticking with it. And this should be a pretty accessible list: Literary references that we all make... without realizing, remembering or knowing they're actually literary references. To keep the list "pure," I shied away from any literary references that only really became popular because of movies based on books. (Like calling people hobbits, talking about Never Never Land, touring the bridges of Madison County, things like that.) Big Brother. Seven SF novels for radicals, utopians, and dreamers | There Is No Alternative So what is SF? Partially a hazy roadmap, partially a utopian dream, and very often a mirror of present conditions, the genre resists settled categorisation just as it resists elevation to the hallowed heights of literary fiction. Where to start? 1) Kim Stanley Robinson’s Mars series. The three books, Red Mars, Green Mars and Blue Mars articulate a vision of a future well informed not only by possible technological progress but by history, sociology, and politics. 2) Ken MacLeod’s Fall Revolution Series, particularly The Star Fraction, The Stone Canal and The Cassini Division. 3) Iain M. The Culture novels are best described as a cross between an anarcho-syndicalist post-scarcity utopia, and a liberal utopia and mirror of the Now. 4) Ursula K. Being less directly concerned with specific technological advances, Le Guin’s books have a great deal more space to breathe and to play and to give rise to both striking personal and political insight. 5) Francis Spufford’s Red Plenty. Like this:

12 of Stephen Fry's Wise, Witty Quotations Stephen Fry is an actor, writer, poet, TV host, narrator, and for all I know a terrific cook -- the man is so prolific he has a Wikipedia page devoted simply to listing his works. Through all of his work he weaves threads of good humor, keen intellect, and a tremendously open attitude about his own life: the result is a tapestry of wit that is eminently quotable, and deserving of careful reading. Below, I've collected my favorite Fry quotations. 1. On Incuriosity "The only reason people do not know much is because they do not care to know. From The Fry Chronicles (Kindle Locations 1265-1266). 2. "This is the point. From Fry's Twitter account. 3. "... From The Fry Chronicles (Kindle Locations 3852-3857). 4. "What's great about them is that anybody can go into them and find a book and borrow it free of charge and read it. From Fry's March 2001 appearance on Room 101. 5. When asked his opinion about a Dream Catcher: "And astrology: most people will say of astrology, 'Well, it's harmless fun.' 6.

Top 5 Books Every Intel Professional Should Read (But Have Probably Never Heard Of) There are tons of great reading lists for intelligence professionals. The CIA has a list, The National Intelligence University has a list, The Marine Corps and other military institutions have lists; even intelligence professionals in the business community have lists. I have noticed, however, that, oftentimes, these lists contain many, if not all, the same books. Over the last several years, though, I have identified a number of books that I think every intelligence professional ought to read ... but aren't yet on anyone's list. Without further ado (and in reverse order): #5 The Lady Tasting Tea: How Statistics Revolutionized Science In The Twentieth Century. #4 The Theory That Would Not Die: How Bayes’ Rule Cracked the Enigma Code, Hunted Down Russian Submarines and Emerged Triumphant From Two Centuries of Controversy. #3 How To Measure Anything: Finding The Value Of Intangibles In Business. #2 Expert Political Judgment: How Good Is It? How about you?

Fiction Truer Than Fact: A Haunting Autobiographical Novel Sarah Manguso's latest book is called The Guardians. I like autobiographies that approach their subjects insidiously. My favorite ones begin as a study of someone or something else. Then, partway through, the author realizes he's the subject. And my very favorite autobiographies are the ones, in all their particularity, that might as well be about me — or you, or anyone. Sylvia grew from an autobiographical essay into a novella subtitled A Fictional Memoir. "The brush swept down and ripped free until, abruptly, she quit brushing, stepped into the living room, dropped onto the couch, leaned back against the brick wall, and went totally limp. The woman is Sylvia Bloch, indeed the name of the author's first wife, described in the book as "abnormally bright" but prone to violent rages, "like a madwoman imitating a college student." Leonard presents the compulsive love affair alongside his own compulsive record of it. hide captionSarah Manguso is also the author of The Two Kinds of Decay.

Shakespeare Insult Kit Shakespeare Insult Kit Since 1996, the origin of this kit was listed as anonymous. It came to me on a piece of paper in the 90's with no attribution, and I thought it would make a cool web page. Though I searched for the origin, I could never find it. In 2014, Lara M informed found the originating author. It appears to be an English teacher at Center Grove High School in Greenwood Indiana named Jerry Maguire. Combine one word from each of the three columns below, prefaced with "Thou": My additions: cullionly whoreson knave fusty malmsey-nosed blind-worm caluminous rampallian popinjay wimpled lily-livered scullian burly-boned scurvy-valiant jolt-head misbegotten brazen-faced malcontent odiferous unwash'd devil-monk poisonous bunch-back'd toad fishified leaden-footed rascal Wart-necked muddy-mettled Basket-Cockle pigeon-liver'd scale-sided Back to the insulter. Chris Seidel

Brave New World by Aldous Huxley Chapter One A SQUAT grey building of only thirty-four stories. Over the main entrance the words, CENTRAL LONDON HATCHERY AND CONDITIONING CENTRE, and, in a shield, the World State's motto, COMMUNITY, IDENTITY, STABILITY. The enormous room on the ground floor faced towards the north. Cold for all the summer beyond the panes, for all the tropical heat of the room itself, a harsh thin light glared through the windows, hungrily seeking some draped lay figure, some pallid shape of academic goose-flesh, but finding only the glass and nickel and bleakly shining porcelain of a laboratory. Wintriness responded to wintriness. "And this," said the Director opening the door, "is the Fertilizing Room." Bent over their instruments, three hundred Fertilizers were plunged, as the Director of Hatcheries and Conditioning entered the room, in the scarcely breathing silence, the absent-minded, soliloquizing hum or whistle, of absorbed concentration. Meanwhile, it was a privilege. Responds by budding. Mr.