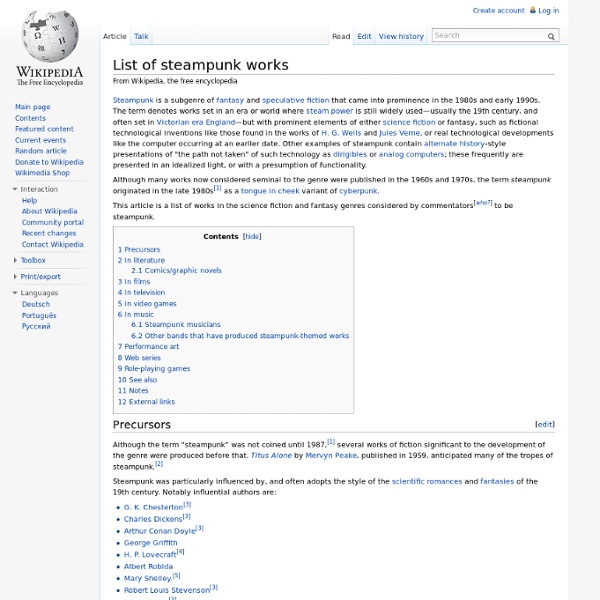 Steampunk is a subgenre of fantasy and speculative fiction that came into prominence in the 1980s and early 1990s. The term denotes works set in an era or world where steam power is still widely used—usually the 19th century, and often set in Victorian era England—but with prominent elements of either science fiction or fantasy, such as fictional technological inventions like those found in the works of H. G. Wells and Jules Verne, or real technological developments like the computer occurring at an earlier date. Other examples of steampunk contain alternate history-style presentations of "the path not taken" of such technology as dirigibles or analog computers; these frequently are presented in an idealized light, or with a presumption of functionality. Although many works now considered seminal to the genre were published in the 1960s and 1970s, the term steampunk originated in the late 1980s[1] as a tongue in cheek variant of cyberpunk. Precursors[edit] H. In literature[edit]

Steampunk "Maison tournante aérienne" (aerial rotating house) by Albert Robida for his book Le Vingtième Siècle, a 19th-century conception of life in the 20th century Steampunk also refers to any of the artistic styles, clothing fashions, or subcultures, that have developed from the aesthetics of steampunk fiction, Victorian-era fiction, art nouveau design, and films from the mid-20th century.[3] Various modern utilitarian objects have been modded by individual artisans into a pseudo-Victorian mechanical "steampunk" style, and a number of visual and musical artists have been described as steampunk. History[edit] Precursors[edit] Origin of the term[edit] Dear Locus,Enclosed is a copy of my 1979 novel Morlock Night; I'd appreciate your being so good as to route it Faren Miller, as it's a prime piece of evidence in the great debate as to who in "the Powers/Blaylock/Jeter fantasy triumvirate" was writing in the "gonzo-historical manner" first. Modern steampunk[edit] steampunk cafe in Cape Town

The Bitterroot Footage My name is Chad. I'm a student at a university in New York. I just moved to a studio apartment and needed some furniture. An old wooden box caught my attention. The film was pretty damaged so I just kept it on my bookshelf as decoration, but I couldn't get the images of the pictures out of my head. With help from Dario, we got an old 8mm projector in good working condition on Ebay. I asked my friend to help me make this website so I can share my findings. Wooden Box and photos Open Box with film can and photos One of the photos The projector we're using with plastic reels. Footage online The Photos are online as I promised. Main Page 12 Critical Things You Should Never Tolerate There is so much in life that we just tolerate. Some of it we have to deal with (taxes, bad weather, traffic). But there’s a good portion of stuff that we tolerate even when we don’t have to. We step around things, overlook irritations, and mindlessly accept energy drains. Perhaps we’ve become so immune to these tolerations that we don’t recognize the negative impact they have on us. Sometimes just recognizing the things we are tolerating in life gives us a renewed sense of hope and energy. However, when you address some of your bigger tolerations, you can completely change the course of your life and open doors to a world of happiness and inner peace that you didn’t know existed. Think about the poorest of the poor, living in squalor and despair without the hope of a better future. In the same way, we must search for these portals that will allow us to move to the next level of powerful living. Do you want to walk through the portal to a happier life? 1. 2. 3. Are you overweight? 4. 5.