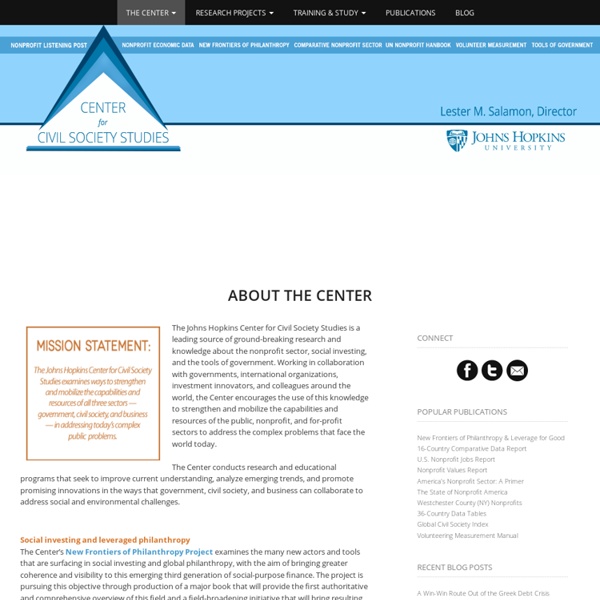 Comparative Nonprofit Sector Project (CNP) | Center for Civil Society Studies The Johns Hopkins Comparative Nonprofit Sector Project (CNP) is the largest systematic effort ever undertaken to analyze the scope, structure, financing, and role of the private nonprofit sector in countries around the world in order to enrich our understanding of this sector, and to provide a sounder basis for both public and private action towards it. Begun in 1991, this project grew out of an increased need for basic information about civil society organizations following a dramatic “associational revolution.” This revolution forced a reappraisal of the respective roles of the market and the state focused new attention on the role of private, nonprofit organizations; however, despite this growing importance, these organizations remained poorly understood almost everywhere, making it difficult to determine their capabilities or to attract attention to their challenges. Objectives This project aims to:

Adam Michnik Family[edit] Adam Michnik was born in Warsaw, Poland, to a family of Jewish communists.[2] His father, Ozjasz Szechter, was the first secretary of the Communist Party of Western Ukraine, and his mother, Helena Michnik, was a historian, communist activist and children's book writer. His half brother (on his mother's side), Stefan Michnik, was a judge in the 1950s during the Stalinist period and has been accused of passing death sentences on Polish resistance movement soldiers. His half brother (on his father's side), Jerzy Michnik (b. 1929), settled in Israel after 1957, and then moved to New York.[3] Education[edit] While attending primary school, he was an active member of the Polish Scouting Association (ZHP), in a troop which was led by Jacek Kuroń. In 1964 he began studies in history at Warsaw University. Władysław Gomułka used Michnik's Jewish background to wage an anti-Semitic campaign, blaming the Jews for the crisis. Opposition[edit] In 1976–77 he lived in Paris. Bibliography[edit]

The Open Book of Social Innovation The Open Book of Social Innovation – part of a series on methods and issues in social innovation – is about the many ways in which people are creating new and more effective answers to the biggest challenges of our times: how to cut our carbon footprint; how to keep people healthy; how to end poverty. It describes the methods and tools for innovation being used across the world and across the different sectors – the public and private sectors, civil society and the household – and in the overlapping fields of the social economy, social entrepreneurship and social enterprise. It draws on inputs from hundreds of organisations around the world to document the many methods currently being used. In other fields, methods for innovation are well-understood. The work is the result of a major collaboration between Nesta and the Young Foundation: two organisations that are committed to the role that social innovation can play in addressing the most pressing issues facing society today.

Association of Fundraising Professionals - AFP Infographic: Give Local America 2015 Results—the Bigger Picture | Kimbia $68.5 million raised. 375,000+ gifts received. 9,000+ nonprofits benefited. By now you’ve probably heard about the impressive results from the second annual Give Local America, a nationwide, Kimbia-powered crowdfunding event held on May 5, 2015; but when did donors give and to which causes? Which ten nonprofits raised the most? What are some examples of how this year’s event impacted local communities? This Give Local America 2015 infographic takes a deeper dive, showing detailed results as well as what made this year’s event so special. Mark your calendars—the third annual Give Local America will be held May 3, 2016!

How to Measure Civil Society Editors Introduction Civil society has become an important concept in the social sciences, and has emerged as a central topic among policymakers and practitioners alike. With such prominence comes a need for clearer understanding, better information and ways to position civil society and its various dimensions in the context of economy, polity and society at large. In this feature, Helmut K. Anheier, director of the Centre for Civil Society based at the London School of Economics and Political Science, and Lisa Carlson, research assistant at the Centre, discuss the various definitions and the complexities of civil society. A phenomenon as complex and multifaceted as civil society invites a variety of definitions and attempts to capture its "conceptual essence". Even though the concept of civil society has become prominent in the social sciences, it remains somewhat unclear and even contested in terms of its actual meanings and uses.

Welcome to CEGA Projects The Best Free Workout Videos on YouTube | Greatist Now that the holidays are creeping around the corner, you may have to break up with your regularly scheduled sweat sessions, at least temporarily. And though the most wonderful time of the year may interfere with your fave spin class or butt-kicking bootcamp routine, it’s completely possible to stay fit—all you need is an Internet connection and a little living room space. (OK, and maybe a few props here and there.) And it’s all thanks to these seriously excellent, totally free YouTube videos. Strength and Conditioning 1. The queen of lean, Jillian Michaels brings her tough training to YouTube. 2. 7-Minute Workout: Full-Body, Fat-Burning Cardio This video is proof positive that you don’t need to hit the gym—or have a ton of time or space—for a truly killer workout. 3. Build strong lower limbs (a.k.a. 4. Ever since butt selfies (ahem, #belfies) became a thing, it’s been clear that building the best booty is at the top of many fitness wish lists. 5. 6. Dance 7. 8. 9. 10. 11. 12. 13. ​14.

Global peace index 2014: every country ranked | News The world has become less peaceful each year since 2008 according to 2014's Global Peace Index (GPI), put together by the Institute for Economics and Peace. The continued conflict in Syria, deteriorating situation in Ukraine and civil war in South Sudan helped contribute to the trend. The last year's fall in global peace was mostly attributable to drops in four of the 22 indicators used to put together the index: Terrorist activity Number of internal and external conflicts foughtNumber of displaced people as a percentage of the populationNumber of deaths from organised internal conflict The ongoing civil war in Syria has made it into the world's least peaceful nation, with the country dropping below Afghanistan who held the spot last year. Just above those two is South Sudan, which registered the biggest fall in peace of any this year following the internal violence that began last December. Europe keeps place as most peaceful region How accurate is their prediction model? Militarisation

TheNonProfitTimes Image Scaling using Deep Convolutional Neural Networks — Flipboard Engineering This past summer I interned at Flipboard in Palo Alto, California. I worked on machine learning based problems, one of which was Image Upscaling. This post will show some preliminary results, discuss our model and its possible applications to Flipboard’s products. High quality and a print-like finish play a key role in Flipboard’s design language. When we display images on either the web or mobile devices they must be above a certain threshold to display well. Full bleed High Quality Image Lower resolution images introduce pixelation, over smoothing and artifacts when scaled above 100%. Full bleed Low Quality Image What is the cause of this? Before we go any further I would like to give a high level introduction to both the traditional and convolutional flavours of Neural Networks. Note: Smaller nuances of Neural Networks will not be covered in the introduction. Neural Networks Neural Networks are an amazing type model that is able to learn from given data. Our simple model Architecture