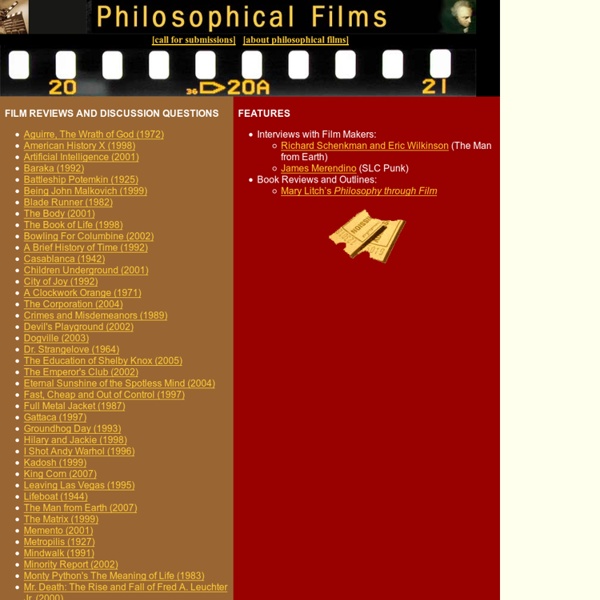 Meditation 99 “Life is a Dream.” Meditation 99: Life is a Dream Metaphors draw two unlikely suspects together in an illuminating way. The metaphor “Achilles is a lion” is not literally true, unless I have a lion named “Achilles.” Yet it draws attention to the courage and strength of the hero with a punch that straight prose lacks. “X is brave and strong” applies to many people. “Life is a dream” is a well known metaphor. At this point, we might ask why “Life is a Dream” has captured so much attention over the years? Another way I have resisted the life/dream metaphor is by rejecting mysticism as not sufficiently rational. After coming to these dark reflections, I found a question to move forward. First of all, a dream is not illusory on its own terms. From this standpoint, there is a deep identity between dreams and waking life.

Listal - List the stuff you love! Movies, music, books AVweb » The World's Premier Independent Aviation News Resource Combustible Celluloid - Guide to Cult Movies and Cult Films Army of Darkness (1993) The third film in Sam Raimi's Evil Dead trilogy features more zombies, more action, more laughs, and more kisses. With Bruce Campbell. "Gimme some sugar, baby!" Basket Case (1982) Frank Henelotter's amazing low-budget splatter comedy showcases Siamese twin brothers -- one normal, the other a squishy little beast who lives in a basket -- searching for revenge on the New York doctors who separated them. Battle Royale (2000) This mind-blowing Japanese film is endlessly entertaining, by turns gory and hilarious, disturbing and exciting. The Big Lebowski (1998) Any of the Coen Brothers' films could qualify as cult classics, but this one is both the most underappreciated and has the most fanatical following. Big Trouble in Little China (1986) John Carpenter's goofy kung-fu comic book adventure revels in its own silliness and features an amazing John Wayne-ish performance by Kurt Russell. The Black Cat (1934) Edgar G. Black Sunday (1960)Black Sunday (a.k.a.

Flight Controls - General - AirSimmer Support 2.3.4 Speedbrake Control Speedbrake function is achieved by spoilers 2, 3 and 4. The pilot controls the speedbrakes using the speedbrake lever. Speedbrake is inhibited if: - Both SEC 1 and SEC 3 fail - An elevator has a fault (in this case, only spoilers 3 and 4 are inhibited) - Angle-of-attack protection is active - Flaps are in CONF FULL (A320 and A319), or CONF 3 (A321). This does not apply to the A318. - Thrust Levers are above MCT position - Alpha Floor activation When these conditions occur when the speedbrakes are extended, they are automatically retracted and stay retracted until the condition(s) disappears and the pilot resets the speedbrake lever. Note - If a speedbrake on one wing fails, the symmetric speedbrake on the other wing is inhibited. - For maintenance, the speedbrake lever will also extend number 1 spoilers on the ground Ground Spoiler Control All spoilers (1 through 5) are used for the ground spoiler function.

Alternative Movies Boeing 757 Air Systems :: Air Conditioning skip navigation Biggles Software ERROR 404 - Page not found The dog ate that page! Biggles Software can only supply FCOM and AOM-based software to Aircraft Operators and TRTOs, and to pilots who are currently operating the aircraft type. To ensure better compliance with manufacturer Copyright, Confidentiality and Licensing requirements - whilst respecting your data protection and confidentiality - Biggles Software is developing a more robust method of determining individual eligibility. This will probably require individuals to complete some form of application stating which airline they work for and in what capacity, etc, and to provide documentary evidence of which FCOM or AOM is applicable, its revision status and date of issue, etc. It is hoped that it will not take too long to develop a manageable, compliant process but, until then, safe flying! Update: A compliant process has now been agreed and is in the development stage. Thank you to everyone who has been in touch!

Film & Video The following films are presented for educational and non-commercial use only. All copyrights belong to the artists. About UbuWeb Film & Video UbuWeb is pleased to present thousands of avant-garde films & videos for your viewing pleasure. However, it is important to us that you realize that what you will see is in no way comparable to the experience of seeing these gems as they were intended to be seen: in a dark room, on a large screen, with a good sound system and, most importantly, with a roomful of warm, like-minded bodies. However, we realize that the real thing isn't very easy to get to. We realize that the films we are presenting are of poor quality. UbuWeb

Airplane Geeks Podcast - Aviation Podcast Best Film Speeches and Monologues Contemptuous talk-show radio host in Dallas Texas, Jewish radio personality Barry Champlain (Eric Bogosian) held all the phone calls, to tell his listening audience what he really felt about them, as the camera circled around him: Believe it or not, you make perfect sense to me. I should hang. I'm a hypocrite. I ask for sincerity and I lie. I denounce the system as I embrace it.

Boeing 737 Management Reference Guide The B737MRG is also available on iPad and Android tablets as an independent and interactive app. You can free download the app and view some sample files. If you are pleased by the concept and functionalities of the app, you can purchase the entire book (go to the In-App Purchase page from the dropdown menu in the right upper corner of the app). The price for the electronic version varies per country and is listed on the In-App Purchase page. The following editions are published in electronic format : CL (3/4/500) + NG (6/7/8/900/BBJ) NG (6/7/8/900/BBJ) NG (6/7/8/900/BBJ) in Chinese - visit www.b737mrg.cn The app comes with various functionalities : (click on screenshots) Do I have to pay again when I re-install the app on the same or on my new tablet ? iTunes is throwing-up a confusing message that you have to pay again, but after accepting, you will get a confirmation that you already paid for the app. I cannot download the files / Download take 30 minutes or more... I want a refund