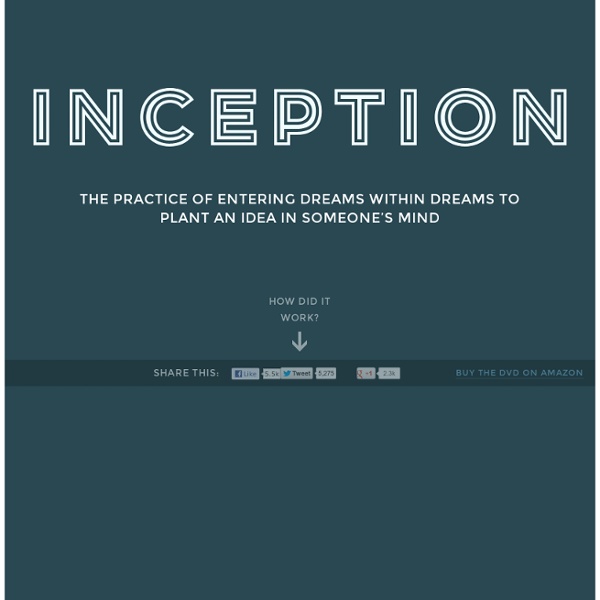 Movies and Magnets - Erik Boertjes - 2012 Recommended Version 7 Update 55 Select the file according to your operating system from the list below to get the latest Java for your computer. By downloading Java you acknowledge that you have read and accepted the terms of the end user license agreement <p><span class="termhighlight">In order to optimize your experience and provide you with accurate messages, please enable javascript in your browser for the duration of your Java installation.

40 Must See Films of 2013 Nicolas Winding Refn’s Drive could very well be my favorite film of 2011. The stripped down style and elegant atmosphere made what would normally be just another pulp story into something mythic and new. That’s why I was ecstatic to hear that Refn and leading man Ryan Gosling would be re-teaming in Only God Forgives, an almost spiritual sequel to Drive. From what’s been released, the plot “follows Julian, who runs a Thai boxing club as a front organization for his family’s drug smuggling operation, as he is forced by his mother Jenna to find and kill the individual responsible for his brother’s recent death.” Refn has said that the filmmaking style present in Drive is very much continued in Only God Forgives, giving the graphic story an almost fairy tale quality. The fact that this is being made gives me all the more reason to be excited for next year in film.

Top 100 Tuesday: 100 Best Movies of the Decade EmailEmail Since we first published our 100 Best Movies of the Decade in 2009, films have continued to get bigger and better. Here’s an update to the original list. Wind Map An invisible, ancient source of energy surrounds us—energy that powered the first explorations of the world, and that may be a key to the future. This map shows you the delicate tracery of wind flowing over the US. The wind map is a personal art project, not associated with any company. We've done our best to make this as accurate as possible, but can't make any guarantees about the correctness of the data or our software. Please do not use the map or its data to fly a plane, sail a boat, or fight wildfires :-) If the map is missing or seems slow, we recommend the latest Chrome browser.

77 Science Fiction and Fantasy Movies to Watch Out For in 2013 EVIL DEAD: seriously? Yet another movie that doesn't need to be remade. RISE OF AN EMPIRE: alas, King Xerxes did not got his ass kicked by the Spartans. At best, the Spartans bought the rest of the Greek forces time to marshal and arrive by sacrificing themselves to the vastly larger Persian forces at the narrow pass at Thermopylae, so named for its hot sulphur springs. I barely remember what happened in 300. I know that in real life, the Spartans got massacred and just bought a little time for the Greek forces to arrive.

Empire's 500 Greatest Movies Of All Time 10,000 Empire readers, 150 of Hollywood's finest and 50 key film critics voted in the most ambitious movie poll evert attempted. 500. Ocean's Eleven (2001) Director: Steven Soderbergh Slick, suave and cooler than a penguin's knackers, Soderbergh's starry update of the Rat Pack crime caper not only outshines its predecessor, but all the lights of The Strip combined.Read our Ocean's Eleven review 499. Wes Anderson's Worlds The world is so big, so complicated, so replete with marvels and surprises that it takes years for most people to begin to notice that it is, also, irretrievably broken. We call this period of research “childhood.” There follows a program of renewed inquiry, often involuntary, into the nature and effects of mortality, entropy, heartbreak, violence, failure, cowardice, duplicity, cruelty, and grief; the researcher learns their histories, and their bitter lessons, by heart.