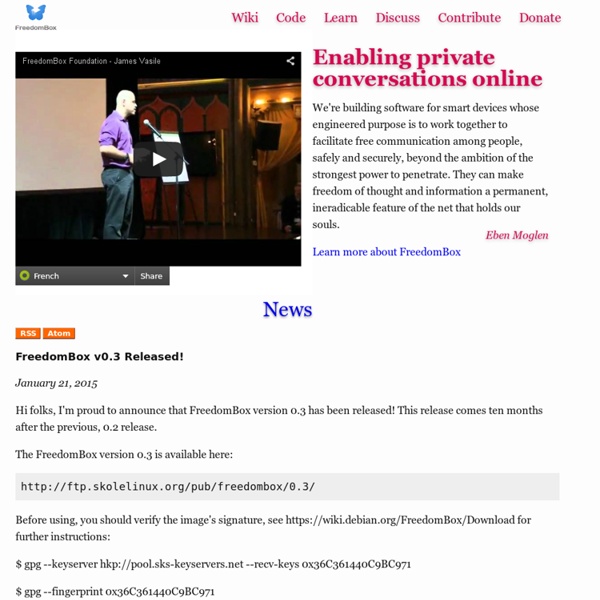 I am pleased to announce our first FreedomBox software release. The FreedomBox 0.1 image is available here (.torrent) (sha512sum: 867f5bf462102daef82a34165017b9e67ed8e09116fe46edd67730541bbfb731083850ab5e28ee40bdbc5054cb64e4d0e46a201797f27e0b8f0d2881ef083b40). This 0.1 version is primarily a developer release, which means that it focuses on architecture and infrastructure rather than finish work. The exception to this is privoxy-freedombox, the web proxy discussed in previous updates, which people can begin using right now to make their web browsing more secure and private and which will very soon be available on non-FreedomBox systems. More information on that tool at the end of this post. What have we accomplished?

Push the FreedomBox Foundation from 0 to 60 in 30 days by Ian Sullivan Beyond 60 We've reached our initial fundraising goal, but we're still going strong. More money helps us found the project stronger, reach goals faster and explore more technologies of freedom. We're proud of the Freedom Box Foundation's public roots, and we want to be able to demonstrate support and interest from as many people as possible. So thank you to everyone who has pledged so far and please, keep pledging and keep giving. FCC net neutrality decision sets up court battle, say experts The US Federal Communications Commission's recent vote to impose net neutrality rules on broadband providers will lead to lengthy court battles, as well as efforts in Congress to repeal the rules, a group of Internet law experts said Wednesday. Even supporters of the FCC's Dec. 21 vote predicted that multiple court challenges are likely as soon as the FCC officially publishes the new rules in the Federal Register. Court challenges to the rules are "inevitable," said Colin Crowell, former senior counselor to FCC Chairman Julius Genachowski . Multiple lawsuits in courts across the US are likely, with some questioning the FCC's authority to make rules affecting Internet service providers and other groups suggesting the rules are arbitrary, added Markham Erickson, executive director of the Open Internet Coalition and a supporter of the rules. The new rules prohibit service providers from selectively blocking or slowing Web traffic.

How the Internet Gets Inside Us When the first Harry Potter book appeared, in 1997, it was just a year before the universal search engine Google was launched. And so Hermione Granger, that charming grind, still goes to the Hogwarts library and spends hours and hours working her way through the stacks, finding out what a basilisk is or how to make a love potion. The idea that a wizard in training might have, instead, a magic pad where she could inscribe a name and in half a second have an avalanche of news stories, scholarly articles, books, and images (including images she shouldn’t be looking at) was a Quidditch broom too far. About don't log into the net - be the net! FunkFeuer is a free, experimental network in Vienna, Graz, in parts of Weinviertel (NÖ) and Bad Ischl. It is build and maintained by computer enthusiasts.

The Computer as a Communication Device This landmark 1968 essay foresaw many future computer applications and advances in communication technology, such as distributed information resources and online interactive communities that are commonplace today as Internet chat rooms and peer-to-peer applications. Originally published in Science and Technology, April 1968. Published on KurzweilAI.net November 9, 2001. In a few years, men will be able to communicate more effectively through a machine than face to face. Internet Freedom Fighters Build a Shadow Web Just after midnight on January 28, 2011, the government of Egypt, rocked by three straight days of massive antiregime protests organized in part through Facebook and other online social networks, did something unprecedented in the history of 21st-century telecommunications: it turned off the Internet. Exactly how it did this remains unclear, but the evidence suggests that five well-placed phone calls—one to each of the country’s biggest Internet service providers (ISPs)—may have been all it took. At 12:12 a.m. Cairo time, network routing records show, the leading ISP, Telecom Egypt, began shutting down its customers’ connections to the rest of the Internet, and in the course of the next 13 minutes, four other providers followed suit.

Wikileaks, The Pirate Party, And The Future Of The Internet How to save Julian Assange's movement from itself. American diplomacy seems to have survived Wikileaks’s “attack on the international community,” as Hillary Clinton so dramatically characterized it, unscathed. Save for a few diplomatic reshuffles, Foggy Bottom doesn’t seem to be deeply affected by what happened. Certainly, the U.S. government at large has not been paralyzed by the leaks—contrary to what Julian Assange had envisioned in one of his cryptic-cum-visionary essays, penned in 2006. In a fit of technological romanticism, Assange may have underestimated the indispensability of American power to the international system, the amount of cynicism that already permeates much of Washington’s political establishment, and the glaring lack of interest in foreign policy particulars outside the Beltway.

If you build it, they won’t come (unless…) (Editor’s note: Jason Cohen is an angel investor and the founder of Smart Bear Software. This story originally appeared on his blog.) Ask a technical founder about his startup, and he’ll proudly describe his stunning software — simple, compelling, useful, fun. Then he’ll describe his cutting-edge platform — cloud-based, scalable, distributed version control, continuous integration, one-click-deploy. Maybe you’ll even get a wobbly demo.”Great,” I always exclaim, sharing the thrill of modern software development, “so how will people find out about this brilliant website?”