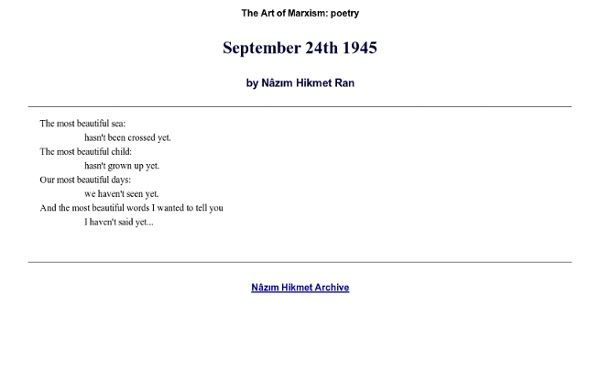 10 Reasons Why My Dog Is My Valentine The following article was written by Keegan Baur. Valentine’s Day is the day when we cherish our loved ones and shower them with affection. We each choose a valentine and make every effort to show that special someone just how much we truly appreciate him or her. But who says “that someone” has to be human? Stone Telling: The Magazine of Boundary-crossing Poetry by Shira Lipkin the girl's voice the changeling voice I have studied so hard to pass as one of you. I've spent a lifetime on it. untitled Admired in her time, this author fell quickly from view, but her genius is now being rediscovered. The literary star known as “L.E.L.,” pen name of the British poet, novelist, and critic Letitia Elizabeth Landon (1802-1838), rose to prominence around 1824. But after her death in 1838 in Africa, her fame went into occultation, and her works were largely lost from public view until the last two decades. It is a tantalizing mystery, in many respects. Why, with her brief but impressive career, did Letitia Landon fade so quickly and utterly from the literary world?

TEN UNTRANSLATABLE WORDS - spicyshimmy - Mass Effect FORELSKET The euphoria you experience when you’re first falling in love. Like getting tag-teamed by a one-two shot—cryo round first, incendiary second—that was walking into the same room as Commander Shepard. The experience blew cold and then hot, but after Rahna… Kaidan was used to it, as much as anybody could be. If you were the sky and I were the sea. by Duck If you were the skyThen I'd be the seaAnd when you shined brightIt would reflect in me.When you're at restThen I am steady.If you wanna get roughI'm always ready.Past closing at the barsIf you show me the starsI'll open right upAnd cast them out far.And on the darkest nightIf you won't shine a light.Then I'm silent alongside youUntil you feel right.We'll meet at the horizonWhere lovers will stareAnd wonder with passionWhy they can't meet there.And you'll share me a kissAs bright as two suns.When they meet in the middleI'll know the days done.And I can tell that's your way of saying to me.Goodnight my love.If you were the sky and I were the sea.

untitled Jennifer Hardner ’01Cedar Crest College A Biography of Landon using "Love’s Last Lesson" Letitia Elizabeth Landon was born in London in 1802. She had a younger brother and a younger sister. The 12 Ties that Bind Long-Term Relationships That crazy thing we call love is perhaps one of the most studied and least understood areas in psychology. One reason is that many studies of romantic relationships are carried out not in real life, but in the lab. Making matters worse, many of these studies involve dating relationships between samples of convenience, consisting of undergraduate students.

untitled First the poem, then the discussion. Or really, if you have time, first the poem. Then a a few moments to think/grieve, and then the discussion. You'll understand that better in a moment, unless this is one you already know by heart. When We Two Partedby George Gordon, Lord Byron Saudade Saudade (European Portuguese: [sɐwˈðaðɨ], Brazilian Portuguese: [sawˈdadi] or [sawˈdadʒi], Galician: [sawˈðaðe]; plural saudades)[1] is a Portuguese and Galician word that has no direct translation in English. It describes a deep emotional state of nostalgic or profound melancholic longing for an absent something or someone that one loves. Moreover, it often carries a repressed knowledge that the object of longing may never return.[2] A stronger form of saudade may be felt towards people and things whose whereabouts are unknown, such as a lost lover, or a family member who has gone missing. Saudade was once described as "the love that remains" after someone is gone. Saudade is the recollection of feelings, experiences, places or events that once brought excitement, pleasure, well-being, which now triggers the senses and makes one live again.

untitled The Sonnet form is one of the strictest and most difficult forms of poetry in the English language. But if done correctly, it can be one of the most beautiful pieces of poetic art, and many great poets have made it so. The first sonnets were written by the Italian poets. untitled Part Four, covering the period 1810-1815, was a crucial one for Southey’s career and reputation. It has, however, never before been fully documented or fully understood. By 1810 he was established in Keswick – a Lake Poet by residence if not by inclination and one whose interests and connections engaged him in global networks and exchanges. The years 1810-1815 were exceptionally busy ones for Southey.