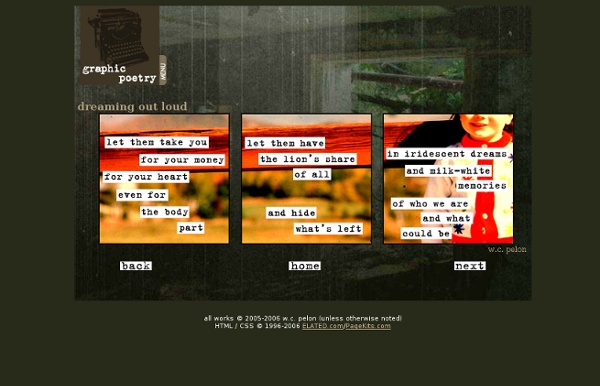 Stone Telling: The Magazine of Boundary-crossing Poetry by Shira Lipkin the girl's voice the changeling voice I have studied so hard to pass as one of you. altered books Cut the bindings off of books found at a used book store. Find poems in the pages by the process of obliteration. Put pages in the mail and send them all around the world. Lather, rinse, repeat. This site is a chronicle of a very specific set of collaborations between the artists listed below working on the titles listed below. *loves = referred 200+ people our way The Thirty-Six Dramatic Situations The Thirty-Six Dramatic Situations is a descriptive list which was created by Georges Polti to categorize every dramatic situation that might occur in a story or performance. To do this Polti analyzed classical Greek texts, plus classical and contemporaneous French works. He also analyzed a handful of non-French authors. In his introduction, Polti claims to be continuing the work of Carlo Gozzi, who also identified 36 situations. Publication history[edit] “Gozzi maintained that there can be but thirty-six tragic situations.

Teachers Archives Shelley Breivogel + Kimber Scarlett For our first Educator Spotlight of the year, we had the pleasure of chatting with two lovely ladies from Evansville, Indiana. Kimber Scarlett and Shelley Breivogel are second grade teachers at Scott Elementary School. They discovered Symbaloo early last year and are using it in several different ways with teachers, students and parents. For example, they collaborate with a few other teachers at their school and together they use SymbalooEDU as apart of their curriculum mapping each month. Kimber and Shelley explain the details of their curriculum mapping and other ways they’ve been using SymbalooEDU in the video below.

25 Beautifully Illustrated Thought-Provoking Questions 405 Flares Facebook 137 Twitter 5 Google+ 194 StumbleUpon 1 Pin It Share 68 68 405 Flares × A question that makes you think is worth asking… At the cusp of a new day, week, month, or year, most of us take a little time to reflect on our lives by looking back over the past and ahead into the future. We ponder the successes, failures and standout events that are slowly scripting our life’s story. Mamihlapinatapai The word Mamihlapinatapai (sometimes spelled mamihlapinatapei) is derived from the Yaghan language of Tierra del Fuego, listed in The Guinness Book of World Records as the "most succinct word", and is considered[by whom?] one of the hardest words to translate. It allegedly refers to "a look shared by two people, each wishing that the other will offer something that they both desire but are unwilling to suggest or offer themselves.

My Collection of Funny Emails. Send funny emails to your friends! Reynolds Wrap has lock in taps to hold the roll in place The color on the bread tab indicates how fresh the bread is And those colors are in alphabetical order: b, g, r, w, y. You can divide and store ground meat in a zip loc bag. Just break off how much you need and keep the rest in the freezer for later. Books.Blog - Guests - Skip Graduate School, Save $32,000, Do This Instead Three years ago, I invested $32,000 and the better part of two years at the University of Washington for a master's degree in International Studies. The verdict? It wasn't a complete waste of time and money.

List of superhuman features and abilities in fiction Origins Examples of ways in which a character has gained the ability to generate an effect. Methods Examples of methods by which a character generates an effect. Powers Superpower interaction The Egg Author's Note: The Egg is also available in the following languages: The Egg By: Andy Weir You were on your way home when you died. It was a car accident.

27 Amazing Graphic Novels For Readers New To The Genre So, you want to try comics, but are turned off by the history? You don’t want to memorize 60 years of X-Men characters, or why there have been four different versions of the Legion of Super-Heroes? Luckily, there are a ton of absolutely amazing graphic novels out there, that require no outside knowledge, just an open mind. Here are 27 graphic novels, perfect for someone new to the medium, presented in no particular order. 25 Ways To Fuck With Your Characters As storyteller, you are god. And to be frank, you’re not a particularly nice god — at least, not if you want your story to resonate with readers. A good storyteller is a crass and callous deity who treats the characters under his watchful eye like a series of troubled butt-puppets.