Listen, are you breathing just a little, and calling it a life? Have You Ever Tried to Enter the Long Black Branches? 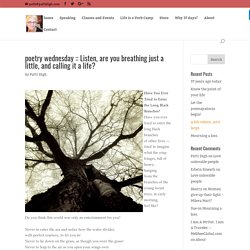 Have you ever tried to enter the long black branches of other lives —tried to imagine what the crisp fringes, full of honey, hanging from the branches of the young locust trees, in early morning, feel like? Do you think this world was only an entertainment for you? Never to enter the sea and notice how the water divides with perfect courtesy, to let you in! Never to lie down on the grass, as though you were the grass! Never to leap to the air as you open your wings over the dark acorn of your heart! A woman standing in the weeds. b0e66d 18b79dd72fb8445bb59b0f34d3bdf945. Last Night I Dreamed I Made Myself. Your paperweight. 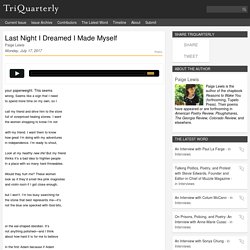 This seemswrong. Seems like a sign that I needto spend more time on my own, so I call my friend and drive him to the storefull of overpriced healing stones. Poem: "Buen Esqueleto" By Natalie Scenters-Zapico. Wedding readings. Wedding season is in full swing. 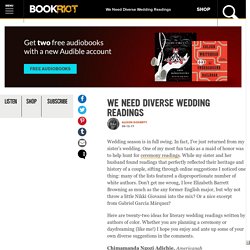 In fact, I’ve just returned from my sister’s wedding. One of my most fun tasks as a maid of honor was to help hunt for ceremony readings. While my sister and her husband found readings that perfectly reflected their heritage and history of a couple, sifting through online suggestions I noticed one thing: many of the lists featured a disproportionate number of white authors. Don’t get me wrong, I love Elizabeth Barrett Browning as much as the any former English major, but why not throw a little Nikki Giovanni into the mix? Or a nice excerpt from Gabriel García Márquez? Here are twenty-two ideas for literary wedding readings written by authors of color. 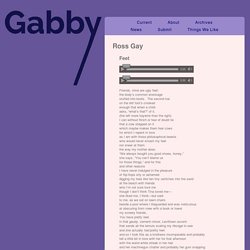 The second toe on the left foot’s crooked enough that when a child asks, “what’s that?” Poems – Sofia Samatar. Kindness - Poems. Naomi Shihab Nye was born on March 12, 1952, in St. 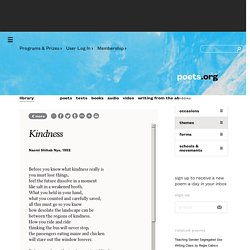 Louis, Missouri, to a Palestinian father and an American mother. During her high school years, she lived in Ramallah in Palestine, the Old City in Jerusalem, and San Antonio, Texas, where she later received her BA in English and world religions from Trinity University. Nye is the author of numerous books of poems, including Transfer (BOA Editions, 2011); You and Yours (BOA Editions, 2005), which received the Isabella Gardner Poetry Award; 19 Varieties of Gazelle: Poems of the Middle East (Greenwillow Books, 2002), a collection of new and selected poems about the Middle East; Fuel (BOA Editions, 1998); Red Suitcase (BOA Editions, 1994); and Hugging the Jukebox (Far Corner Books, 1982). She is also the author of several books of poetry and fiction for children, including Habibi (Simon Pulse, 1997), for which she received the Jane Addams Children’s Book award in 1998. She was elected a Chancellor of the Academy of American Poets in 2009. Punch in the Face Poetry - “Running Orders,” Lena Khalaf Tuffaha.

09:17am “Running Orders,” Lena Khalaf Tuffaha They call us now. 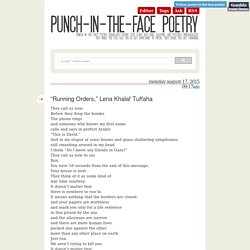 Before they drop the bombs. The phone rings and someone who knows my first name calls and says in perfect Arabic “This is David.” Poem: "When The Therapist Asks You To Recount, You Have To Say It" By Aricka Foreman - BuzzFeed News. Poetry mc practice using poetry. Small Murders. When Cleopatra received Antony on her cedarwood ship, she made sure he would smell her in advance across the sea: perfumed sails, nets sagging with rosehips and crocus draped over her bed, her feet and hands rubbed in almond oil, cinnamon, and henna. 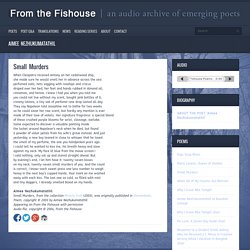 I knew I had you when you told me you could not live without my scent, bought pink bottles of it, creamy lotions, a tiny vial of parfume—one drop lasted all day. They say Napoleon told Josephine not to bathe for two weeks so he could savor her raw scent, but hardly any mention is ever made of their love of violets. Her signature fragrance: a special blend of these crushed purple blooms for wrist, cleavage, earlobe. Some expected to discover a valuable painting inside the locket around Napoleon’s neck when he died, but found a powder of violet petals from his wife’s grave instead. Cattails - Poems. Nikky Finney was born on the coast of South Carolina in 1957 to a family of politicians and activists. 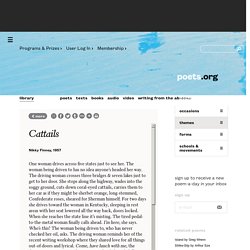 She began writing poetry as a young girl, during a childhood marked by the civil rights struggle, and subsequently attended Talladega College in Alabama. Finney’s first book of poetry, On Wings Made of Gauze (W. Morrow, 1985), followed by Rice (Sister Vision, 1995), Heartwood (University of Kentucky Press, 1997), and The World is Round (InnerLight Publishing, 2003).

In 2011, her collection Head Off & Split (Northwestern University Press, 2011) was awarded the National Book Award. Poem: "A New National Anthem" By Ada Limón - BuzzFeed News. Words for solace and strength: poems to counter the election fallout – and beyond. Audre Lorde once wrote that “poetry is not a luxury”, and right now it is a necessity. 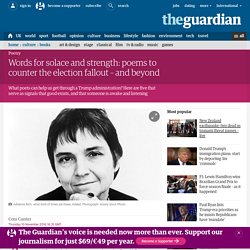 What kind of poetry can get us through a Donald Trump presidency? We’ll need satire and spitting vitriol. We’ll need rallying cries. We’ll need reminders of human dignity. Each poet here has struggled with the relationship between poetry and action, with the question of poetry’s relevance in a time of crisis. Gwendolyn Brooks – Langston Hughes Gwendolyn Brooks’ brief poems are like talismans to carry close to your skin for protection and comfort. Langston Hughes.

Poetry 180 - After Years. Sign for My Father, Who Stressed the Bunt. On the rough diamond, the hand-cut field below the dog lot and barn, we rehearsed the strict technique. 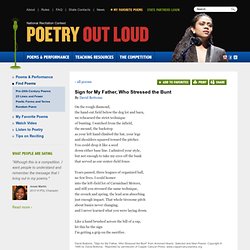 Not only do they make you look too young, but then your torso is a giraffe’s neck attached to tiny legs. For writing poems about you still. "Reunion," Elijah Patterson - Punch in the Face Poetry. "We Get New Cells," Kate Horowitz - Punch in the Face Poetry. 01:30pm "We Get New Cells," Kate Horowitz poemfull: “Every seven years,” she said,“Not all at once, of course.” She wasre-testing her food allergies, sneakingpeanut butter cups past her immune system on a Saturday night.So far the Reese’s had been safe, but the imitation crab meaton a seaweed salad had meantfive hours in the emergency room.I thought about the hot spear of your voiceseven years ago, and how if now the sight of youmakes my chest tight,it’s probably only natural.

"Things," Lisel Mueller - Punch in the Face Poetry. 01:30pm "Things," Lisel Mueller What happened is, we grew lonely living among the things, so we gave the clock a face, the chair a back, the table four stout legs which will never suffer fatigue. We fitted our shoes with tongues as smooth as our own and hung tongues inside bells so we could listen to their emotional language, and because we loved graceful profiles the pitcher received a lip, the bottle a long, slender neck.

Even what was beyond us was recast in our image; we gave the country a heart, the storm an eye, the cave a mouth so we could pass into safety. "I Would Steal Horses," Sherman Alexie - Punch in the Face Poetry. "Monet Refuses the Operation," Lisel Mueller - Punch in the Face Poetry. 12:27pm "Monet Refuses the Operation," Lisel Mueller Doctor, you say that there are no haloesaround the streetlights in Parisand what I see is an aberrationcaused by old age, an affliction.I tell you it has taken me all my lifeto arrive at the vision of gas lamps as angels,to soften and blur and finally banishthe edges you regret I don’t see,to learn that the line I called the horizondoes not exist and sky and water,so long apart, are the same state of being.Fifty-four years before I could seeRouen cathedral is builtof parallel shafts of sun,and now you want to restoremy youthful errors: fixednotions of top and bottom,the illusion of three-dimensional space,wisteria separatefrom the bridge it covers.What can I say to convince youthe Houses of Parliament dissolvenight after night to becomethe fluid dream of the Thames?

Why Some Girls Love Horses by Paisley Rekdal. Poetry 365 - Lake and Maple, Jane Hirshfield (for 7/21) [Poetry] One Last Poem For Richard by Sandra Cisneros. Say It Straight and Humble. Richard Siken, "Wishbone" Wishbone Richard Siken You saved my life he says I owe you everything. Exceptindreams: 1501: for women who are 'difficult' to love. Dedication for a Plot of Ground by William Carlos Williams. Heavy Summer Rain by Jane Kenyon. Punch in the Face Poetry. "A History Without Suffering ﻿," E.A. Punch in the Face Poetry. "On the Second Anniversary of My Father’s Death," Sherman Alexie. Willie Perdomo: “Crazy Bunch Barbecue”

Poem of the Week: Rich Villar. The Victims by Sharon Olds. Ebb by Edna St. Vincent Millay. That Pull from the Left by Louise Erdrich. Variation on the Word Sleep. Eating Poetry: What Lot's Wife Would Have Said (If She Wasn't A Pillar of Salt) Habits - Written by Nikki Giovanni... Do enjoy reading this poem… Send it to a friend… "African-American Poem" The Red Shoes by Sheila Black. If in America by Ed Bok Lee. POEM: YOU DON'T KNOW WHAT LOVE IS BY KIM ADDONIZIO. STRAWBERRIES. In Time by W. S. Merwin.

Kitchenette building by Gwendolyn Brooks : Poem Guide : Learning Lab. Before You Came. Sorrows by Lucille Clifton - Poetry Magazine. We Asked British Poets To Share Their Favourite Poems For National Poetry Day. 45 Literary Quotes About Big, Messy Life Changes. Two Poems - The Collagist - The Collagist. Seam for Internet. Two poems by Jamaal May. Western Beefs of North America. Three Poems — THIS. 1995. After the Streetlights Drink Whatever Darkness is Left — Winter Tangerine. 11 Short Poems That'll Tug At The Heart Strings Of Any Woman Who's Been Body-Shamed. 20 Young Writers Of Color Share Their Favorite Poems. My Story in a Late Style of Fire , Larry Levis.