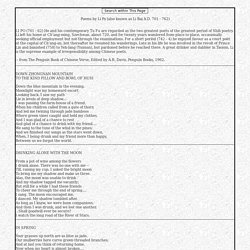 Li left his home at Ch'ang-ming, Szechwan, about 720, and for twenty years wandered from place to place, occasionally seeking official employment but not through the examinations. For a short period (742 - 4) he enjoyed favour as a court poet at the capital of Ch'ang-an, but thereafter he resumed his wanderings. Late in his life he was involved in the revolt of Prince Lin and banished (758) to Yeh-lang (Yunnan), but pardoned before he reached there. A great drinker and dabbler in Taoism, Li is the supreme example of irresponsibility among Chinese poets. -- from The Penguin Book of Chinese Verse, Edited by A.R. Down the blue mountain in the evening, Moonlight was my homeward escort. From a pot of wine among the flowers I drank alone.

The lovely Lo Fo of the western land Plucks mulberry leaves by the waterside. Li Bai Index. Li Bai Index Each poem indexed below appears in characters, pinyin, gloss and English translation; alternatively, the English translations are collected on one page here.Amusing MyselfAncient Air (39)Autumn AirChanggan Memories Crows Calling at NightFor Wang LunHearing a Flute on a Spring Night in LuoyangLaolao Ting PavilionLong YearningMarble Steps ComplaintMidnight Song of WuQuestion and Answer on the MountainSeeing Off a FriendSeeing Off Meng Haoran for Guangling at Yellow Crane Tower Sent to Du Fu below Shaqiu CitySitting Alone on Jingting Shan HillStaying the Night at a Mountain TempleThoughts on a Still NightViewing Heaven's Gate MountainsVisiting the Taoist Priest Dai Tianshan But Not Finding Him Li Bai on Project Gutenberg. 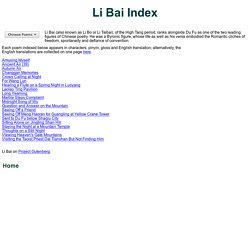 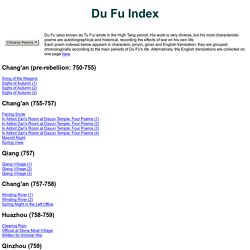 Translated Chinese Poetry: Poems by Tu Fu. Poems by Tu Fu (also known as Du Fu) TU FU (712 - 70) Tu Fu, unlike Li Po, got an official post fairly late in life (758), when the normal examination system had temporarily broken down during the rebellion of An Lu-shan. 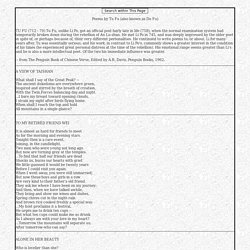 He met Li Po in 745, and was deeply impressed by the older poet in spite of, or perhaps because of, their very different personalities. He continued to write poems to, or about, Li for many years after. Tu was essentially serious, and his work, in contrast to Li Po's, commonly shows a greater interest in the condition of his times (he experienced great personal distress at the time of the rebellion). His emotional range seems greater than Li's and he is also a more intellectual poet. -- from The Penguin Book of Chinese Verse, Edited by A.R. What shall I say of the Great Peak? It is almost as hard for friends to meet As for the morning and evening stars. Who is lovelier than she? Tu Fu. Also known as Du Fu, Tu Fu is considered with Li Po to be one of China’s greatest poets of the Tang dynasty. 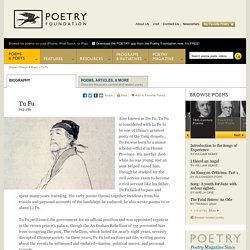 Tu Fu was born to a minor scholar-official in Henan Province. His mother died while he was young, and an aunt helped raised him. Though he studied for the civil service exam to become a civil servant like his father, Tu Fu failed to pass and spent many years traveling. His early poems thread together incidents from his travels and personal accounts of the hardships he endured; he also wrote poems to or about Li Po. Tu Fu petitioned the government for an official position and was appointed registrar in the crown prince’s palace, though the An Lushan Rebellion of 755 prevented him from occupying the post. Discover this poet’s context and related poetry, articles, and media. Articles About TU FU Reporting Poetry by Jeffrey Brown Biography Also known as Du Fu, Tu Fu is considered with Li Po to be one of China’s greatest poets of the Tang dynasty. Your-catfish-friend.