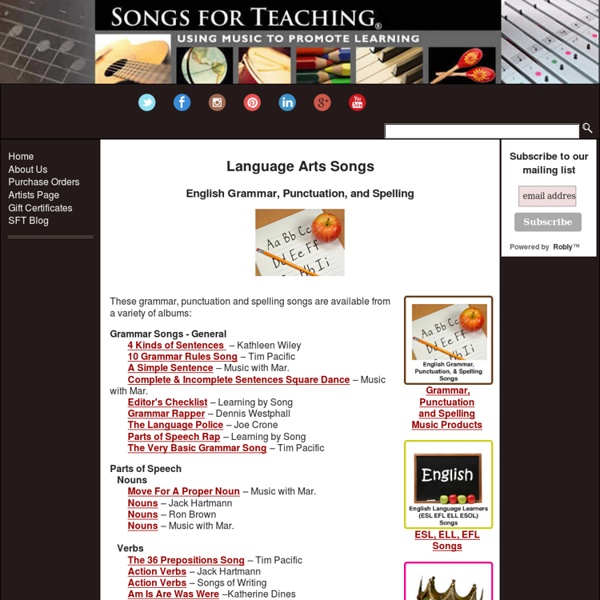 Practical Grammar Activities Here are the abstract, bio data and handout for this presentation given at APAC 2010, TESOL Spain 2010, IATEFL Harrogate 2010 and ACEIA. If you scroll down to the bottom of the page you’ll find a link to the powerpoint presentation. Handout Premise ESL Songs and Music Welcome aboard our ESL Songs and Music Course, and if you are an old friend who visits us often then you know, it's 'hello again' I think that there is more work involved in building a Learn English website than there is in learning to speak and understand English :) Today we are learning English with Tracy Chapman. The first time I heard her music I loved it, but I could not believe she was a woman. She has a very powerful and deep voice.

Learn English Punctuation - English Punctuation Rules For example:-"Could everyone sit down please," said the teacher. Another general rule is to use a comma after the introduction to quoted speech or writing. For example:- Jamie said, "I love you." Sometimes when writing a spoken sentence it is split in two. The speech marks must then be placed at the beginning and end of each part of the sentence. Buffalo 2nd-graders learn grammar by correcting NFL players' tweets Second-graders at Buffalo, New York’s Elmwood Franklin School took a break from practicing addition and learning about George Washington last week and jumped into an unusual spelling and grammar lesson: correcting NFL players’ typo-filled tweets. San Francisco 49ers cornerback Chris Culliver, who also made headlines this week with an anti-gay remark, attracted the students’ attention by writing on Twitter that “I pray to God I’m never dieing broke” [sic]. A fan tweeted back: “Ask him for spellcheck while you’re at it.” The kids, however, fixed the mistake and proudly held up their corrected posterboard for a Facebook photo. The students “applied their lessons in proper sentence structure, noun and verb usage, spelling, and punctuation to correct the tweets of professional football players,” the school’s official Facebook page said. “The students partnered in groups and together found several mistakes in these tweets, including the incorrect spelling of ‘a lot.’”

Steven Pinker Identifies 10 Breakable Grammatical Rules: "Who" Vs. "Whom," Dangling Modifiers & More We’ve previously featured Harvard cognitive scientist Steven Pinker discussing writing at a Harvard conference on the subject. In that case, the focus was narrowly on academic writing, which, he has uncontroversially claimed, “stinks.” Now—“not content with just poaching” in the land of the scribes, writes Charles McGrath at The New York Times Sunday Book Review—Pinker has dared to “set himself up as a gamekeeper” with a new book—The Sense of Style: The Thinking Person’s Guide to Writing in the 21st Century. The grandiose title suggests to McGrath that the scientist intends to supplant that most venerable, and most dated, classic writer’s text by Strunk and White.

ESL Lounge: Songs for English Teaching. Song Titles S using songs in the esl classroom It's great to use songs in the class, if only to do something a little different. But beyond using them solely to give your students some 'light relief', there are many other ways songs can be used in ESL classrooms to consolidate what students have already learnt. Have a song to request? Go to our contact page. if you know what you're looking for

The Basics of Punctuation Punctuation is the system of signs or symbols given to a reader to show how a sentence is constructed and how it should be read. Sentences are the building blocks used to construct written accounts. They are complete statements. Punctuation shows how the sentence should be read and makes the meaning clear. Every sentence should include, at least, a capital letter at the start a full stop, exclamation mark or question mark at the end.