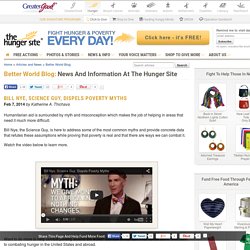 MercyCorps: The Syrian Crisis and Water Scarcity Mar 25, 2014: In a water scarce nation like Jordan, the wise use of water resources is a critical element to ensure that refugees continue to live in security with the resources they need to live. Listen to the I Am Malala Song Mar 24, 2014: This inspiring song speaks to the goals of gender equality and the determination to see a future where women and girls are given the same opportunities to achieve their potential. Dancing for HIV Education Mar 21, 2014: A fierce dance troupe called Addis Beza uses their moves to attract a crowd and then share information on HIV prevention and testing. MercyCorps: Focusing on the Children of Syria Syria: An Ongoing Crisis UNICEF USA: Combatting HIV/AIDS in Malawi. Papal encouragement for joint effort by bishops, police chiefs to combat human trafficking. 1 2 0Google +0Delicious0 Catholic World News - December 05, 2014 Pope Francis has sent a message of support to an international group working to curb human trafficking. 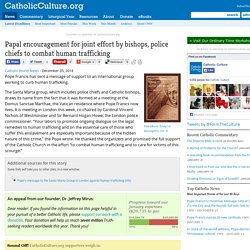 The Santa Marta group, which includes police chiefs and Catholic bishops, draws its name from the fact that it was formed at a meeting at the Domus Sanctae Marthae, the Vatican residence where Pope Franics now lives. It is meeting in London this week, co-chaired by Cardinal Vincent Nichols of Westminster and Sir Bernard Hogan-Howe, the London police commissioner. “Your labors to promote ongoing dialogue on the legal remedies to human trafficking and on the essential care of those who suffer this enslavement are especially important because of the hidden nature of this crime,” the Pope wrote. Sound Off! All comments are moderated. There are no comments yet for this item. Recent Catholic Commentary Top Catholic News Most Important Stories of the Last 30 Days Copyright © 2015 Trinity Communications. How a modern DC art exhibit is learning womanhood from Mary. Washington D.C., Dec 5, 2014 / 04:45 am (CNA/EWTN News).- A new art exhibit in Washington, D.C., hopes to revive a sense of womanhood exemplified in the Virgin Mary, as depicted by Renaissance and Baroque artists. 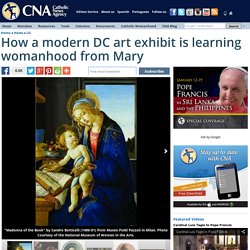 “I think one of the messages that the exhibit communicates to all viewers – irrespective of religion or lack of religious interest and commitment,” explained exhibit curator, Monsignor Timothy Verdon, is “the fascination that this woman has exerted across the centuries.” The exhibit “Picturing Mary” is on display at Washington’s National Museum of Women in the Arts from Dec. 5 through April 12 – “between Christmas and Easter” as Msgr. Verdon explained. Food, blankets and hope – nuns risk lives to serve Syrian refugees. Beirut, Lebanon, Nov 12, 2014 / 04:27 am (CNA/EWTN News).- Near the Lebanon-Syria border, two religious sisters are among the staff members at a refugee service center working to give relief – and hope – to thousands who have fled the armed conflict in Syria. 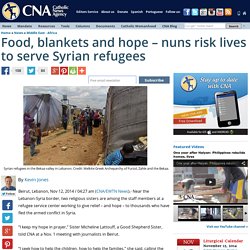 “I keep my hope in prayer,” Sister Micheline Lattouff, a Good Shepherd Sister, told CNA at a Nov. 1 meeting with journalists in Beirut. We had a MARVELOUS conclusion to our 3... - John Michael Talbot. 200,000 activists tell Europe: stand up for persecuted Christians. Rome, Italy, Oct 20, 2014 / 04:26 pm (CNA).- More than 200,000 people have signed a petition asking European leaders to offer “real help” for persecuted Christians and other religious minorities around the world. 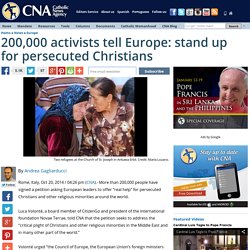 Luca Volonté, a board member of CitizenGo and president of the international foundation Novae Terrae, told CNA that the petition seeks to address the “critical plight of Christians and other religious minorities in the Middle East and in many other part of the world.” Volonté urged “the Council of Europe, the European Union’s foreign ministers and the European Parliament to put into action policies of asylum and humanitarian aid, to bring this horror to an end.” Novae Terrae launched a petition in August on CitizenGo, an online platform for human rights advocacy, asking the Council of Europe and other continental leaders to step up in tacking religious persecution on a global scale. 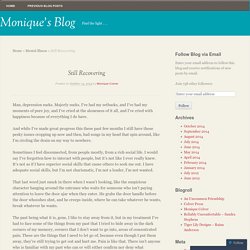 Majorly sucks. I’ve had my setbacks, and I’ve had my moments of pure joy, and I’ve cried at the aloneness of it all, and I’ve cried with happiness because of everything I do have. And while I’ve made great progress this these past few months I still have those pesky issues cropping up now and then, bad songs in my head that spin around, like I’m circling the drain on my way to nowhere. Sometimes I feel disconnected, from people mostly, from a rich social life. I would say I’ve forgotten how to interact with people, but it’s not like I ever really knew. That last word just snuck in there when I wasn’t looking, like the suspicious character hanging around the entrance who waits for someone who isn’t paying attention to leave the door ajar when they enter. The 18 Most Exhilarating Moments From “The Walking Dead” Season 5 Premiere.