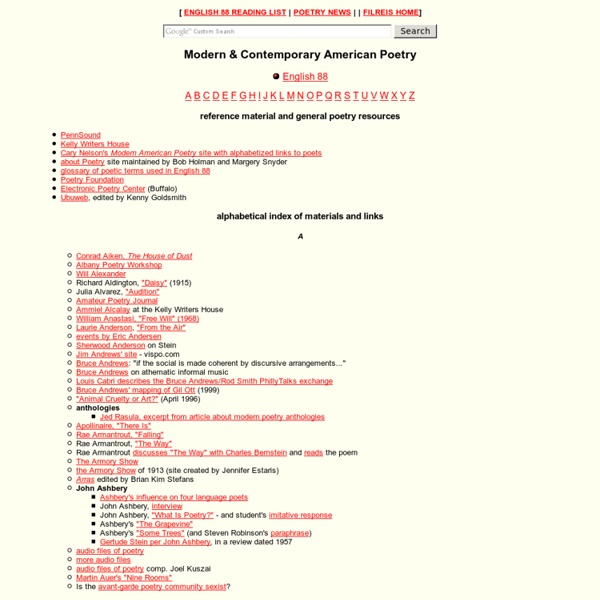 Poems that Tell a Story: Narrative and Persona in the Poetry of Robert Frost Activity 1. Literary Terms On the board, provide students with definitions for the basic literary terms you will be using in this lesson. The central concept taught here is the distinction between Frost-the-poet and the speaker, or persona, that he creates to tell the narrative in the poem. Persona is a term of Latin derivation, and originally denoted a mask made of clay or bark that was worn by actors. The person created by the author to tell a story. Activity 2. Read "Stopping By Woods on a Snowy Evening" aloud in class. Activity 3. Divide the class into small groups selected to balance the talents of the students within each group, and provide each group with copies of one of the following poems (links and sources described in "Poems" section of Preparing to Teach the Lesson): "The Road Not Taken," "Birches," "The Runaway," "Out, Out--," "Mending Wall," or "The Runaway." Activity 4.

CorpsePoetics (formerly WinePoetics) Voices & Visions 1. Elizabeth Bishop From childhood in Nova Scotia to travels in Brazil, this program illustrates the geographic spirit of Bishop's life and works with scenes from her poems. Go to this unit. 2. Hart Crane Diverse locations and dramatizations of his life illustrate Crane's poetry and his greatest work, "The Bridge." Go to this unit. 3. 4. 5. 6. 7. 8. 9. 10. 11. 12. Brilliant readings of Whitman's poems demonstrate his American vision and style and vividly convey their poignance and sheer power. 13. "No ideas but in things," Williams's aesthetic dictum sought to capture, not analyze.

tympan Universe in Words: Introducing: Robert Frost's poetry Robert Frost is one of my favourite poets. The first poetry book I ever bought willingly was his collected works. What is great about Frost is that many of his poems are relatively short, only a couple of lines. That just makes it so much easier to read and think about them, without having to look over 5 or 6 stanzas. On the other hand he has a couple of poems that seem to go on forever. The heart can think of no devotionGreater than being shore to the ocean--Holding the curve of one position,Counting an endless repetition. I adore this poem. Dust in the Eyes by Robert Frost If, as they say, some dust thrown in my eyesWill keep my talk from getting overwise,I'm not the one for putting off the proof.Let it be overwhelming, off a roofAnd round a corner, blizzard snow for dust,And blind me to a standstill if it must. I really like this poem because I think it has a very positive and encouraging message.

Cahiers de Corey Robert Frost Prompts the Poet in You Lesson Plan Preview In this lesson, students write poems similar in form and style to one of three poems by Robert Frost. back to top Certo, J.L. (2004). By introducing great poetry to our students, we can begin to lead them (and ourselves as teachers) beyond poetry writing forms that we most comfortably teach (e.g., diamantes, cinquains, haikus, and acrostic poems).Part of our job is to guide our students in finding the content in great poems that connects to the experiences in their own lives. Standards Students apply a wide range of strategies to comprehend, interpret, evaluate, and appreciate texts. Students apply knowledge of language structure, language conventions (e.g., spelling and punctuation), media techniques, figurative language, and genre to create, critique, and discuss print and nonprint texts. Resources & Preparation Instructional Plan Students will Session 1 Session 2 Session 3