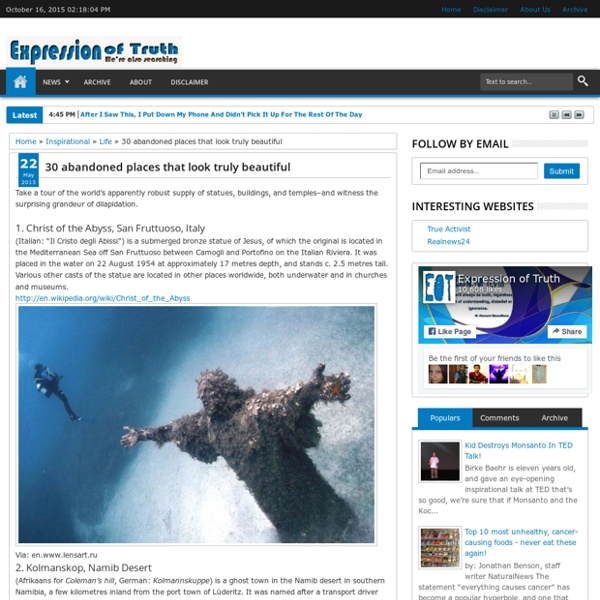 Take a tour of the world’s apparently robust supply of statues, buildings, and temples–and witness the surprising grandeur of dilapidation. 1. Christ of the Abyss, San Fruttuoso, Italy (Italian: “Il Cristo degli Abissi”) is a submerged bronze statue of Jesus, of which the original is located in the Mediterranean Sea off San Fruttuoso between Camogli and Portofino on the Italian Riviera. Via: en.www.lensart.ru 2. (Afrikaans for Coleman’s hill, German: Kolmannskuppe) is a ghost town in the Namib desert in southern Namibia, a few kilometres inland from the port town of Lüderitz. Via: photography.nationalgeographic.com 3. Built in Naples in 1981, the futuristic igloos seen above may not be around much longer. Via: reddit.com 4. SS Ayrfield (originally launched as SS Corrimal) was a steel-hulled, single screw, steam collier of 1140 tonnes and 79.1m in length. Via: photoree.com 5. Image by David Gray / Getty Images 6. Fishing Hut in Lake of Berchtesgaden National Park Via: onebigphoto.com 7. 8. 9. Related:  Abandoned Places • Right Brain

Skyddsrummet mitt i stan Skyddsrummet mitt i stan Ibland förvånas man över att lämningar från andra världskriget mitt i stan klarat sig helt från sprayburkar, sopor eller förstörelse. Eller för den delen sanering. Bergrummet ligger i en kulle mitt bland folk. I anläggningen finns det även ett valv. Således borde det varit företagens värdepaper, ritningar, räkenskaper mm som skulle låstas in här. Valvet tak har droppskydd för att skydda mot väta. I en av gångarna finns toaletten kvar. Handvevad ventilation. Decay när det är som bäst. Ytterligare ett rum i skyddsrummet visar att det använts för mer än personalskydd. som vanligt är alla bilder tagna i komplett mörker.. How Do Human Beings Perceive Reality and What Does it Matter? We are an infant race of seven billion separated by different belief systems of how the planet operates. Imagine a race united in their knowing rather than divided by their belief systems. At the same time we all perceive our physical reality to be the same. By simply perceiving ‘how the world is’, we are simultaneously creating it. If you really think about it, we take a child from a young age and pound them with our version of reality. Many of us have been programmed to believe that it’s a a dog eat dog world, that it’s every man for himself. We literally, scientifically have the ability to manifest any type of reality we desire given the type of energy we all emanate. Become A Health Practitioner Are you ready to take control of your health and help others while making a good living? This course teaches you over 100 health modalities plus business skills so you can become a certified practitioner,be healthyand make a good living at it. Take the FREE class.

Creepy Mansion Is Strangely Abandoned In 1976 And You Are About To See Why... Built in the thirties, this spectacular mansion definitely saw its share of grandiose affairs in its day, but sadly, its been abandoned since the seventies. Located just outside of New York City, the home is like a time capsule for a much more glamorous era — but it also happens to be full of creepy old relics as well. Photographer Bryan Sansivero decided to document the mansion as it is now, and what he found inside is pretty haunting. It’s also an incredible property, complete with a bowling alley, indoor tennis court, library, and two bars. See the abandoned mansion in all of its spooky glory below. The mansion has 57 rooms, and looks like something out of a horror movie. In every room, traces of the mansion’s opulent history remain. But there are also traces of it’s complete and total creepiness. Despite the ominous feel of the photographs, the spooky details are really just evidence of the family that used to live there.

Heartbreaking Photos of Animals Stuck in Zoos While zoos are a great place to see a large number of animals all in one place, there's a dark side to these family attractions that doesn't often get discussed. On Debate.org , the question, "Should we keep animals in zoos?" splits poll takers down the middle with 42% saying yes, saying its especially beneficial for endangered species, and 58% saying no, that animals need to be free and in the wild. What's your opinion? After seeing this series, called Modern Wilderness , by photographer Daniel Zakharov, one's heart can't help but feel incredibly heavy about these animals' doomed destinies. He goes on, "Nowadays animals are born in captivity, between concrete, tiling, cement-slab buildings and artificial landscapes instead of the endless stretch of nature. Daniel Zakharov's website

31 Haunting Images Of Abandoned Places That Will Give You Goose Bumps The world is full of wondrous things, some consistently packed with gawking tourist and others almost entirely abandoned. Here’s a selection of some of those fascinating empty spaces, ghost towns that are rich with history and the stories of the people that used to occupy them. While most continue to rust and crumble in their neglect, all remain hauntingly beautiful. 1. This cooling tower is part of an abandoned power plant station in Monceau-sur-Sambre, Belgium. 2. Kolmanskop, a small settlement in Namibia, is a ghost town today but was booming in the early 1900s when Germans realized the area was rich with diamonds. 3. The hull of the SS Ayrfield, one of many decommissioned ships in Homebush Bay, harbors an over 100 year-old floating forest. 4. The Maunsell Sea Forts were constructed to help defend against German air and naval raids during World War II. 5. This house was the last surviving home of an island community in Chesapeake Bay. 6. 7. 8. 9. 10. 11. 12. 13. 14. 15. 16. 17. 18. 19.

The Last Mimzy (2007 Portraits of Famous Artists and Their Cats Email Email The craze for cats may seem like a modern phenomena, however these fuzz balls have been loved and even worshiped ever since Ancient Egypt. Their solitary character and need for attention is something many artistic minds throughout the history could relate to as well, and flavorwire has put together a very amusing selection of world’s greatest artists and their feline friends. Artists like Matisse, Dali, Picasso, and many more are seen posing with their furry muses – each in their own and different way! Salvador Dalí with his pet ocelot, Babou Henri Matisse loved his cats: Minouche and Coussi Picasso and his Cat Ai Weiwei with Lai Lai — one of his 40 cats Gustav Klimt with his pet, Katze Paul Klee with kitty, Bimbo Romare Bearden hanging out with Gippo Pierre Bonnard and cat Henri Cartier-Bresson captured friend Saul Steinberg lounging with his cat Photographer Margaret Bourke-White with her kitten in 1944 “This is all you need in life: a computer, a camera, and a cat.” — Agnès Varda

6 Forgotten Places, Rediscovered Visiting these rooms, businesses, and homes is like traveling back in time. 1. The Old Operating Theatre Wikimedia Commons In 1822, there was no surgical anesthesia. 2. In 2010, the London Underground began upgrading their Notting Hill Gate station. 3. British Listed Buildings This thatched roof English cottage was likely quite a stately home when it was built in the 1400s. “He just lived a basic life, with one cold tap in the scullery and the occasional bare light bulb to see by. 4. William Straw was a successful grocer at the start of the 20th century. 5. Imgur Earlier this year, Redditor Oktober75 posted to the r/pics sub-reddit something his family had discovered in a building they owned: an old shoe store, closed down in the 1960s, still fully stocked. 6. MessyNessyChic Ray and Mildred Lambrecht are in their 90s now, but they sold cars from their Chevy dealership in Pierce, Nebraska for 50 years.

Eu passarin | "Esses que aí estão / atravancando o meu caminho / eles passarão / eu passarinho" Quintana A 102-Year-Old Transport Ship Sprouts a Floating Forest Bruce Hood Bruce Hood Andy Brill Stephane & Eva Homebush Bay in Sydney, Australia is home to the remnants of a ship-breaking yard that operated during the mid 20th-century. One such ship was the SS Ayrfield, a 1,140-tonne behemoth built in 1911 as a steam collier that was later used during WWII as a transport ship. From 2008-2010 a concerted effort was made to remove many of the lingering chemicals in Homebush left from the industrial era. A huge thanks to Bruce Hood, Andy Brill and Stephane & Eva for providing photos for this post.

The Secret of Creativity with Deepak Chopra Description: Deepak Chopra explores the dynamics of a creative life and the relationship between age and creativity (we don’t have to lose our imagination as we grow older!).* How do you keep your creative spirit alive even as you progress further into adulthood? THE RABBIT HOLE features visually-stunning explorations of BIG questions: What is death? Who is God? Is life an illusion? THE CHOPRA WELL is dedicated to inspiring, fun, and thought-provoking videos about healthy living, wellness, and spirituality.