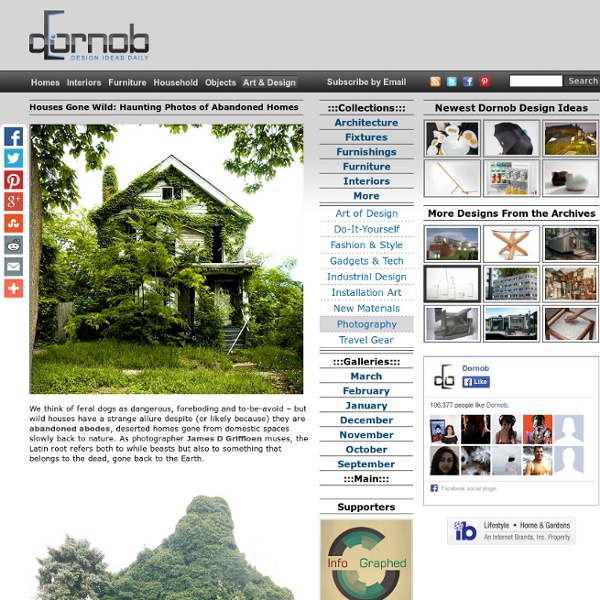 We think of feral dogs as dangerous, foreboding and to-be-avoid – but wild houses have a strange allure despite (or likely because) they are abandoned abodes, deserted homes gone from domestic spaces slowly back to nature. As photographer James D Griffioen muses, the Latin root refers both to while beasts but also to something that belongs to the dead, gone back to the Earth. Some of his shots capture this process at an incredibly late stage, such as the house above which is entirely camouflaged by the greenery that has grown to cover it – only discernible because the branches and vines conform to the shape of the structure. Others photos catch the domestic devolution at intermediate stages, snapshots of partial overgrowth where there is still some strange balance of building and nature – one could almost imagine someone still occupying this structure and simply never leaving it. Related:  ABANDONED

Abandoned Six Flags Hurricane Katrina killed this clown. According to the photographer, “An abandoned Six Flags amusement park, someone spray painted ‘Six Flags 2012 coming soon’ on the wall above the downed head. But they were clownin.’ Six Flags will never rebuild here.” Welcome to Zombie Land kids! Chained dreams of fun at Six Flags New Orleans, abandoned Jazzland – that’s what Six Flags opened as “Jazzland” in 2000. Some photographers can see past the lifeless amusement park’s decay and desolation, showing us that there is still a chance the place could be cheery and not cheerless. Like a Bad Dream. Just in case you don’t know the scoop on what Hurricane Katrina did to New Orleans and Six Flags, this photo is of New Orleans, LA, on Sept. 14, 2005. Unlike the bleak amusement-less park above, some photographers can still see and share with us the echo of magic in the abandoned theme park Six Flags – even 6 years later in 2011. No lines for dead rides. Watch out for that tree! No one wants a ride?

The Ruins of Detroit Posted Feb 07, 2011 Share This Gallery inShare850 Up and down Detroit’s streets, buildings stand abandoned and in ruin. French photographers Yves Marchand and Romain Meffre set out to document the decline of an American city. From the photographers’ website: Ruins are the visible symbols and landmarks of our societies and their changes, small pieces of history in suspension. The state of ruin is essentially a temporary situation that happens at some point, the volatile result of change of era and the fall of empires. Photography appeared to us as a modest way to keep a little bit of this ephemeral state. William Livingstone House # Michigan Central Station # Atrium, Farwell Building # 18th floor dentist cabinet, David Broderick Tower # Bagley-Clifford Office of the National Bank of Detroit # Ballroom, American Hotel # Melted clock, Cass Technical High School # Old First Unitarian Church # Piano, Saint Albertus School # Woodward Avenue Presbyterian Church, built in the Gothic revival style in 1911 #

my cat Abandoned Places: 10 Creepy, Beautiful Modern Ruins Abandoned Places: 10 Creepy, Beautiful Modern Ruins Abandoned Places | We humans are explorers by nature. The quest for discovery, both old and new, is part of what separates us from rest of the animal kingdom. Since the world we live in has been largely mapped and plotted, we urban adventurers turn our sights toward the relics of old and the ruins of the recent past. If you find beauty in urban decay, in the crumbling and abandoned places of yesteryear, you’ll want to read on. Abandoned Submarine Base, Ukraine In a bay on the northern shores of the Black Sea, the Soviet army maintained an elaborate submarine base throughout much of the Cold War. Abandoned Submarine Base Gallery The Ruins of Detroit by Marchand and Meffre In the United States, few cities have felt the burn of urban decay more than Detroit. Ruins of Detroit Gallery Beelitz Military Hospital, Berlin It is rare that a ruin like this should decay so gracefully and without the marks of vandalism. Beelitz Military Hospital Gallery

Abandoned Amusement Park Amusement park is the generic term for a collection of rides and other entertainment attractions assembled for the purpose of entertaining a large group of people. An amusement park is more elaborate than a simple city park or playground, usually providing attractions meant to cater to adults, teenagers, and small children. A theme park is a type of amusement park which has been built around one or more themes, such as an American West theme, or Atlantis. Most amusement parks have a fixed location, as compared to travelling funfairs and carnivals. The world without us: Chernobyl Nature has made a determined comeback In the 20 years since Chernobyl's reactor No. 4 turned a bustling Soviet city into a ghost town. The people are gone, and in their place are now thriving populations of deer, elk, wild boar, wolves, and even lynx. Trees are pushing up through Lenin Avenue and moss is clinging to the broken sidewalks and abandoned buildings throughout the 19-miles that make up the Exclusion Zone. Tim Mousseau of the University of South Carolina has been studying the effects of radiation on Chernobyl's wildlife, and told National Geographic that despite the higher levels of genetic abnormalities, "one of the great ironies of this particular tragedy is that many animals are doing considerably better than when the humans were there." Radiation levels are still too high for long term exposure, but the Ukraine has opened up the nearby city of Pripyat to daytrippers looking to catch a glimpse of what an urban center would look like after 20 years without a human footprint.

102 Year Old Abandoned Ship Grows A Forest In the notoriously polluted waters of Homebush Bay in Sydney, Australia, there is a Floating Forrest flourishing on an abandoned 102-year-old transport vessel. It looks like something out of a movie or some type of art installation, but what makes this juxtaposition of nature and industry so majestic is that the plant-life flourishing on this ancient ship came into being through natural causes. This amazing ship is the SS Ayrfield, a 1,140-tonne vessel built in 1911 as a steam collier that was later used in WWII as a transport ship. In 1972 the SS Ayrfield was brought to Homebush Bay to be dismantled. But, due to a cease in operations at the ship-breaking yard, parts of several large vessels including the Ayrfield were left behind. The largest objects in the area are infamous for their part in decades of chemical dumping and pollution.

Chris Jordan - In Katrina's Wake This series, photographed in New Orleans in November and December of 2005, portrays the cost of Hurricane Katrina on a personal scale. Although the subjects are quite different from those in my earlier Intolerable Beauty series, this project is motivated by the same concerns about our runaway consumerism. There is evidence to suggest that Katrina was not an entirely natural event like an earthquake or tsunami. The 2005 hurricane season's extraordinary severity can be linked to global warming, which America contributes to in disproportionate measure through our extravagant consumer and industrial practices. From that perspective, my hope is that these images might encourage some reflection on the part that we each play, and the loss that we all suffer, when a preventable catastrophe of this magnitude happens to the people of our own country. ~ cj, New Orleans, December, 2005