The 33 Most Beautiful Abandoned Places In The World 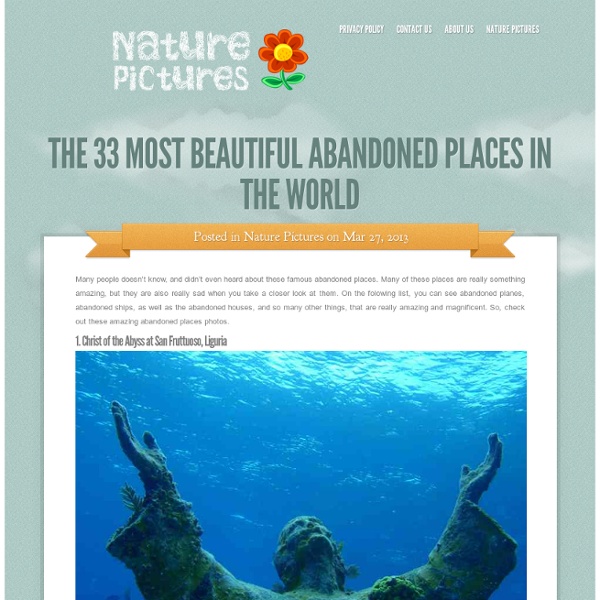 102 Year Old Abandoned Ship Grows A Forest In the notoriously polluted waters of Homebush Bay in Sydney, Australia, there is a Floating Forrest flourishing on an abandoned 102-year-old transport vessel. It looks like something out of a movie or some type of art installation, but what makes this juxtaposition of nature and industry so majestic is that the plant-life flourishing on this ancient ship came into being through natural causes. This amazing ship is the SS Ayrfield, a 1,140-tonne vessel built in 1911 as a steam collier that was later used in WWII as a transport ship. In 1972 the SS Ayrfield was brought to Homebush Bay to be dismantled. But, due to a cease in operations at the ship-breaking yard, parts of several large vessels including the Ayrfield were left behind. The largest objects in the area are infamous for their part in decades of chemical dumping and pollution.

36 Realistically Colorized Historical Photos Make the Past Seem Incredibly Real A new artistic trend has broken out around the world which changes our perception of history dramatically. Colorizing historic photographs from the late 1800′s and early 1900′s changes their appearance from something historic and different, into a scene from today. The colorful image of Albert Einstein sitting beside the water gives us an entire new perspective on the genius. He goes from a brilliant historic relic, into a living brilliance of our era. The colorized photograph of Audrey Hepburn transforms our thoughts of beauty.

Amazing Places To Experience Around The Globe (Part 2) Tian Tan Buddha on Lantau Island, Hong Kong Fernando De Noronha - Brazil Spirit Island, Magligne Lake, Alberta, Canada Rice Field Terraces in Yunnan, China 10 Psychological Experiments That Went Horribly Wrong Psychology as we know it is a relatively young science, but since its inception it has helped us to gain a greater understanding of ourselves and our interactions with the world. Many psychological experiments have been valid and ethical, allowing researchers to make new treatments and therapies available, and giving other insights into our motivations and actions. Sadly, others have ended up backfiring horribly — ruining lives and shaming the profession. Here are ten psychological experiments that spiraled out of control. 10. Stanford Prison Experiment

The 100 Most Beautiful and Breathtaking Places in the World in Pictures (part 1) From majestic waterfalls, and lost cities, to mysterious landmarks and natural wonders, here is a collection of pictures which is worth to be looked on. Feel free to share your favorites destinations! It would be so amazing if you could visit all of these places. Stay in a resale RCI Timeshare to visit one of these amazing places on a budget. Aogashima Volcano, Japan The house that time forgot: Mansion where little has changed in 100 years Auctioneers discovered a treasure trove of antiques inside The HermitageThey discovered wine from 1914 and Champagne from 1919Also discovered family photographs spanning almost 100 yearsContents of the house will be auctioned in 1,500 lots By Anthony Bond Published: 16:00 GMT, 5 June 2013 | Updated: 21:41 GMT, 5 June 2013

WTF photo book - 51 Crazy Pics Caught On Camera - Daily News Dig Tweet Check out our hilarious photo book with 51 of the craziest images you’ll ever see caught just at the right moment to get that real WTF moment in time! See Part 2 here: Part 2 – Another 51 Crazy Pics Places That Are Actually Real But Don't Look So These places look so unreal, but they are real! Maybe some of you were on one of these beautiful place, and if one of you did, you are than really happy person who live on this planet! Just look how this photos are cool and so sweet. Y-chromosomal Adam In human genetics, Y-chromosomal Adam (Y-MRCA) is a hypothetical name given to the most recent common ancestor (MRCA) from whom all currently living people are descended patrilineally (tracing back only along the paternal or male lines of their family tree). However, the title is not permanently fixed on a single individual (see below). Y-chromosomal Adam is named after the biblical Adam, but the bearer of the chromosome was not the only human male alive during his time.[1] His other male contemporaries could also have descendants alive today, but not, by definition, solely through patrilineal descent. Analogous to Y-chromosomal Adam, Mitochondrial Eve is the woman from whom all living humans are descended matrilineally, who lived about 140,000 to 200,000 years ago in Africa.

33 Unbelievable Places To Visit Before You Die – Earth Is So Amazing Salar De Uyuni, Bolivia Source: earthporm.comDuring the rainy season, the world’s largest salt flat becomes the world’s largest mirror. The Salar was born when several prehistoric lakes joined into one. The salt flat is so reflective, it’s used to calibrate satellites. 11 Abandoned American Hospitals and Asylums With some of the most disturbing and tragic histories of any buildings in the US, asylums and hospitals are way beyond creepy . Many of them were built in the late 1800s, when “mental illnesses” (such as masturbation, menopause, and teenage rebellion) were considered dangerous enough to lock someone in an asylum. A pain-inflicting misunderstanding of mental illness combined with a chronic mistreatment of its sufferers meant that many people were never released and spent the remainder of their lives in these horrible institutions. In addition to asylums, many sanatoriums were constructed around this time to care for the poor and very sick. Utilizing radical treatments that were incredibly painful yet ineffective, early hospitals often created more suffering than good for the inflicted. To make matters worse, infectious outbreaks forced patients to be quarantined from the rest of society, further isolating them.

These 19 Nightmarish Places Will Keep You Awake At Night… They Sent Chills Do... As you go about your daily life, it’s easy to forget all of the weird and wonderful things that are tucked away around the world. A Redditor cobbled together 19 of the strangest places on earth, reminding us all of the creepy things that could be hidden in our very towns. Dark forests, abandoned cities, strange museums and other oddities are everywhere. You just need to know how to find them.