This Pearl contains all of my favorite Alien/Predator stories that are mostly romances...So beware!

The Predator's Prerogative Chapter 1: The Hunt Begins, an aliens/predator fanfic. Disclaimer: I own nothing except my OCs. 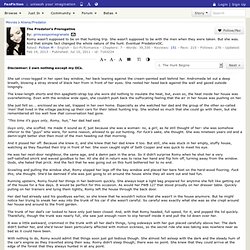 She sat cross-legged in her open bay window, her back leaning against the cream-painted wall behind her. Andromeda let out a deep breath, blowing a stray strand of black hair from in front of her eyes. She rested her head back against the wall and gazed outside longingly. The knee-length shorts and thin spaghetti-strap top she wore did nothing to insulate the heat, but, even so, the heat inside her house was overwhelming.

Even with the window wide open, she couldn't push back the suffocating feeling that the air in her house was pushing on her. Submission to Love, an aliens/predator fanfic. "Submission to Love" Note: Rated for adult scenes containing sexual content. 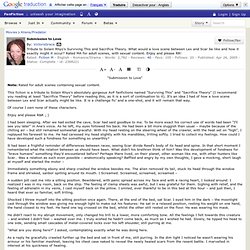 This fiction is a tribute to Solain Rhyo's absolutely gorgeous AvP fanfictions named "Surviving This" and "Sacrifice Theory" (I recommend you reading at least "Sacrifice Theory" before reading this, as it is a sort of continuation to it). It's an idea I had of how a love scene between Lex and Scar actually might be like. It is a challenge fic' and a one-shot, and it will remain that way. Starting a Hive, an aliens/predator fanfic. Sooo…My first Alien fanfiction. 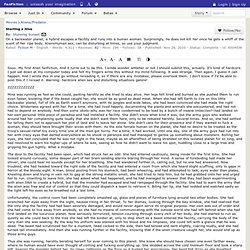 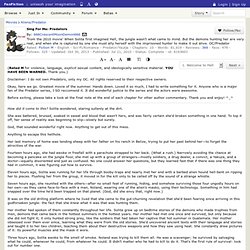 YOU HAVE BEEN WARNED. Thank you.) Semiotic Love, an aliens/predator fanfic. Me: Alright thought I would do something interesting and why not some interspecies lemon goodness! 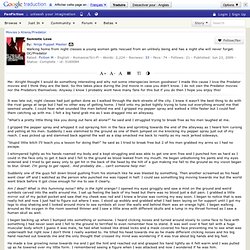 I made this cause I love the Predator movies and I think they are the best. So this takes place during the 2nd movie in case you didn't know. I do not own the Predator movies nor the Predators themselves. Seasons Chapter 1: Meeting, an aliens/predator fanfic. Disclaimer: I don't own predator, alien Garber or Weyland. 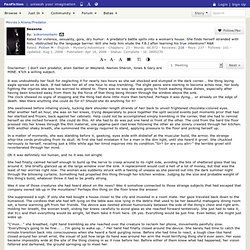 Names Sharon, Jones & Gary are MINE. K'tch a willing subject. It was undoubtedly her fault for neglecting it for nearly two hours as she sat shocked and slumped in the dark corner... the thing laying eagle spread on its back. It had taken her all of one hour to stop trembling. The slight pains were starting to become aches now, her body fighting the injuries she was too worried to attend to. She swallowed before inhaling slowly, tucking dark shoulder-length strands of hair back to unveil frightened chocolate-colored eyes. In a matter of moments, she was standing before it, gawking, eyes wide with disbelief at the muscular build, the armor, the strange whip-like cords protruding from its skull.

Oh it was definitely not human, and no it was not alright. She had finally calmed herself enough to build up the nerve to creep around to its right side, avoiding the bits of shattered glass that lay around it. Ooman Chapter 1, an aliens/predator fanfic. Disclaimer: Don't own Predator...but, I do own Nova so back off. 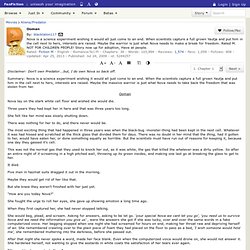 Summary: Nova is a science experiment wishing it would all just come to an end. When the scientists capture a full grown Yautja and put him in the cell next to hers, interests are raised. Maybe the massive warrior is just what Nova needs to take back the freedom that was stolen from her. Ooman Nova lay on the stark white cell floor and wished she would die. Three years they had kept her in here and that was three years too long. Only Movement Chapter 1, an aliens/predator fanfic. Obligatory Author's Note: I don't own, please don't sue. 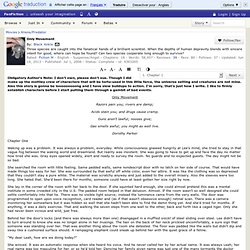 Though I did make up the mottley crew of characters that will be tortu-used in this little farce, the universe setting and creatures are not mine. Also this story is gonna be looooooooong and I have slow buildups to action. I'm sorry, that's just how I write. I like to firmly establish characters before I start putting them through a gambit of bad events. Only Movement Razors pain you; rivers are damp; Acids stain you; and drugs cause cramp. Guns aren't lawful; nooses give; Gas smells awful; you might as well live. Dorothy Parker Chapter One Waking up was a problem.

One More Chapter 1, an aliens/predator fanfic. Disclaimer: I don't own Predator / Alien (or any other references to other fandoms). 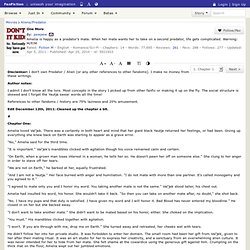 I make no money from these writings. Author notes: I admit I don't know all the lore. Most concepts in the story I picked up from other fanfic or making it up on the fly. The social structure is skewed and I forget the Yautja swear words all the time! References to other fandoms / history are 75% laziness and 25% amusement. Edit December 12th, 2011: Cleaned up the chapter a bit. 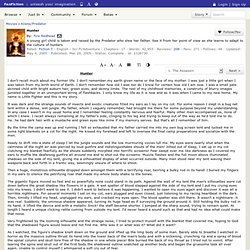 I don't remember my earth given name or the face of my mother. I was just a little girl when I was taken from my birth world of Earth. I don't remember how old I was nor do I know for certain how old I am now. I was a small pale skinned child with bright auburn hair, green eyes, and skinny limbs. It was dark and the strange sounds of insects and exotic creatures filled my ears as I lay on my cot.

By the time the camp was up and running I felt so exhausted that my father carried me into my own bug screen tent and tucked me in some light blankets on a cot for the night. Ready to drift into a state of sleep I let the jungle sounds and the low murmuring voices lull me. Then a huge, monstrous silhouette dropped down amongst them with a terrifying roar, twirling a bulky rod in its hand! The gigantic figure moved so fast and so powerfully none could stand in its path. Hunter 2 Chapter 1, an aliens/predator fanfic. Hunter 2 "Our Return" By Leah READ ME FIRST!

Prelude: At last, the long awaited sequel to "Hunter" has begun! Honour Chapter 1, an aliens/predator fanfic. Alright, first big story. I don't know how long it's going to be, but I'm going to try to keep it to 10 or so chapters. Enjoy! Colette ran down the hall, tracing her fingertips against the wall, trying to keep her bearings in the near pitch. She gasped for breath, the fire-axe slipping in her grip, the handle slick with blood and her own sweat.

She felt her foot catch on something, the fire axe clattering to the ground and skidding ahead of her as she threw her hands out, trying to stop her fall. "Ah, fuck! " Colette stopped suddenly, her breath catching when she heard a low growl to her left, the air shimmering around the cloaked creature. The growl continued, interspersed with the strange chattering the creatures seemed to use as speech.

She gulped, looking up the tall musculature of one of the things that had terrorized them for the past three days. It had begun a week ago, right after one of the best frat parties to celebrate the unnatural heat. Darkness Rising, an aliens/predator fanfic. Welcome to my first story in nearly a year! I hope this is to your liking; criticism is welcomed and greatly appreciated! Dark Grievances, an aliens/predator fanfic. Title: Dark GrievancesCharacter Pairings: Xenomorph/HumanGenre: Horror/RomanceRating: T-MA+Warnings: Future Sexual Content, Graphic Gore, ProfanityDisclaimers: I only own this story and my characters; nothing associated with the Alien movies or the Xenomorph creature in general.

(If I did, I would totally have one lurking inside my closet . . .) Summary: It's the year 28650 A.T. (After Technology), and technology has changed Earth dramatically. There are hovering cars, brain transplants, galaxy travel, and robotic beings to do our dirty, unsavory jobs. Unfortunately, those are only the very few positives of out of the many, many horrors that technology has brought us . . . Recommendation(s): Keep story's width at "3/4"; adjustment settings are at the top-right corner of the site, where the different font styles and sizes are located. "3/4" is the original width that this story was written in.

It was best just to do what was being demanded of her in the current situation and pray to God that she would live to see the game's conclusion no matter how unlikely that seemed at the moment. "Fuck! " The bruised and battered woman, dressed in nothing but a pair of blue panties and a matching camisole, flinched away from the man's calloused hand in both fright and disgust as he reached down to stroke the filthy, novelty rabbit ears that had been affixed to her head. Black Passion: Alien Chapter 1: Love and Gore, an aliens/predator fanfic. First off, Merry Christmas!