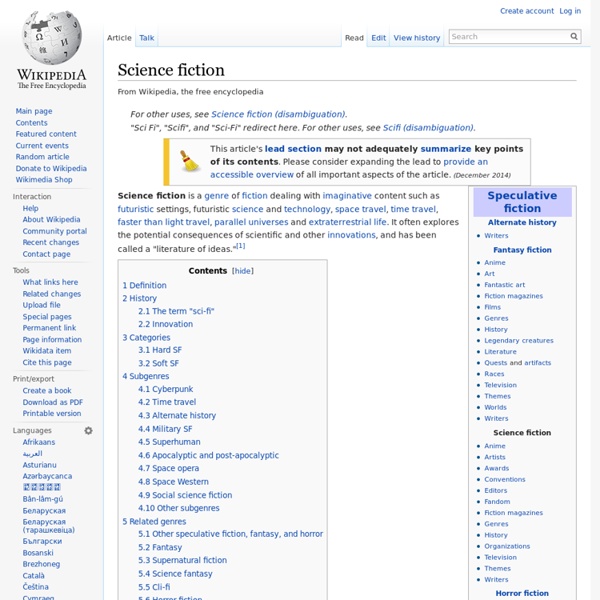 §Definition[edit] A futuristic setting is a common but not a necessary hallmark of science fiction. A common thread in science fiction is exploring the potential consequences of scientific and other innovations on people's lives. According to science fiction writer Robert A. Heinlein, "a handy short definition of almost all science fiction might read: realistic speculation about possible future events, based solidly on adequate knowledge of the real world, past and present, and on a thorough understanding of the nature and significance of the scientific method. Science fiction is largely based on writing rationally about alternative possible worlds or futures.[8] It is similar to, but differs from fantasy in that, within the context of the story, its imaginary elements are largely possible within scientifically established or scientifically postulated physical laws (though some elements in a story might still be pure imaginative speculation). §History[edit] §The term "sci-fi"[edit]

Fantasy Fairy tales and legends, such as Dobrynya Nikitich's rescue of Zabava Putyatichna from the dragon Gorynych, have been an important source for fantasy. In popular culture, the fantasy genre is predominantly of the medievalist form. In its broadest sense, however, fantasy comprises works by many writers, artists, filmmakers, and musicians, from ancient myths and legends to many recent works embraced by a wide audience today. High fantasy Genre overview[edit] High fantasy is defined as fantasy fiction set in an alternative, entirely fictional ("secondary") world, rather than the real, or "primary" world. The secondary world is usually internally consistent, but its rules differ in some way(s) from those of the primary world. By contrast, low fantasy is characterized by being set in the primary, or "real" world, or a rational and familiar fictional world, with the inclusion of magical elements.[1][2][3][4] Nikki Gamble distinguishes three subtypes of high fantasy:[3] Setting[edit]

Realistic Fiction Fiction is the form of any work that deals, in part or in whole, with information or events that are not real, but rather, imaginary and theoretical—that is, invented by the author. Although the term fiction refers in particular to novels and short stories, it may also refer to a theatrical, cinematic, or musical work. Fiction contrasts with non-fiction, which deals exclusively with factual (or, at least, assumed factual) events, descriptions, observations, etc. Thriller (genre) Thrillers are a genre of literature, film, video gaming and television programming that uses suspense, tension, and excitement as the main elements.[3] The primary subgenre is psychological thrillers. After the assassination of President Kennedy, political thriller and paranoid thriller films became very popular. The brightest examples of thrillers are the films of Alfred Hitchcock.[4] "Homer's Odyssey is one of the oldest stories in the Western world and is regarded as an early prototype of the thriller."[7] A thriller is villain-driven plot, whereby he presents obstacles that the hero must overcome.[7]

Airborn - Kenneth Oppel Winner of the 2004 Governor General's Literary Award for Children's Literature!! Spyglass to my eye, I slowly swept the heavens.... Matt Cruse is the 15-year-old cabin boy aboard the Aurora, the 900-foot luxury airship he has called home for the past two years. While crossing the Pacificus, Matt fearlessly rescues the unconscious pilot of a crippled hot air balloon. Fictional universe A fictional universe can be almost indistinguishable from the real world, except for the presence of the invented characters and events that characterize a work of fiction; at the other extreme it can bear little or no resemblance to reality, with invented fundamental principles of space and time. Definition[edit] What distinguishes a fictional universe from a simple setting is the level of detail and internal consistency. A fictional universe has an established continuity and internal logic that must be adhered to throughout the work and even across separate works. So, for instance, many books may be set in conflicting fictional versions of Victorian London, but all the stories of Sherlock Holmes are set in the same Victorian London. However, the various film series based on Sherlock Holmes follow their own separate continuities, and so do not take place in the same fictional universe.

The Maze Runner - James Dashner Read the first book in the New York Times bestselling Maze Runner series, perfect for fans of The Hunger Games and Divergent. The Maze Runner motion picture starring the star of MTV's Teen Wolf, Dylan O’Brien, Kaya Scodelario, Thomas Brodie Sangster, Will Poulter, and Aml Ameen hits theaters September 19, 2014! Also look for James Dashner’s newest book The Eye of Minds, book one in the Mortality Doctrine series.If you ain’t scared, you ain’t human. When Thomas wakes up in the lift, the only thing he can remember is his name. Leviathan Series - Scott Westerfeld News Flash: The Manual of Aeronautics is OUT NOW! It’s in bookstores everywhere, or you can order it online at Powell’s, Barnes & Noble, Amazon, or IndieBound. So, wait. What is the Leviathan series?

Uglies - Scott Westerfeld Uglies is set in a world in which everyone has an operation when they turn sixteen, making them supermodel beautiful. Big eyes, full lips, no one fat or skinny. You might think this is a good thing, but it’s not. Especially if you’re one of the Smokies, a bunch of radical teens who’ve decided they want to keep their own faces. (How anti-social of them.)