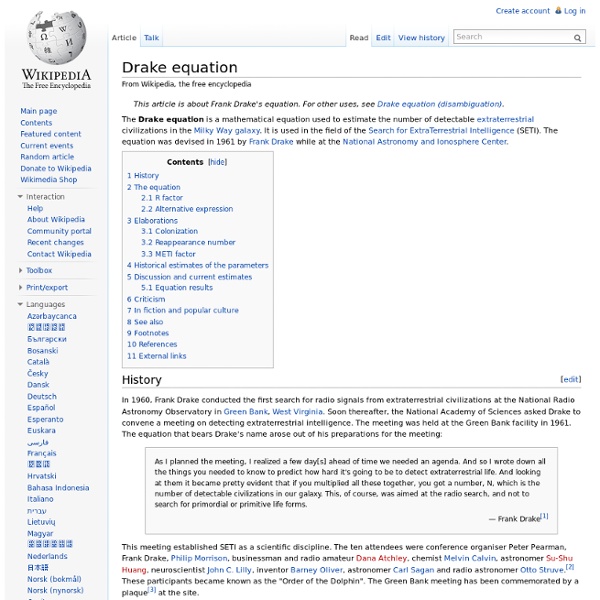 The Drake equation is a probabilistic argument used to estimate the number of active, communicative extraterrestrial civilizations in the Milky Way galaxy. The equation was written in 1961 by Frank Drake not for purposes of quantifying the number of civilizations,[1] but intended as a way to stimulate scientific dialogue at the world's first SETI meeting, in Green Bank, West Virginia. The equation summarizes the main concepts which scientists must contemplate when considering the question of other radio-communicative life.[1] The Drake equation has proved controversial since several of its factors are currently unknown, and estimates of their values span a very wide range. This has led critics to label the equation a guesstimate, or even meaningless. History[edit] In September 1959, physicists Giuseppe Cocconi and Philip Morrison published an article in the journal Nature with the provocative title "Searching for Interstellar Communications The equation[edit] The Drake equation is: where: . Related:  UFOs? and Life in the Beyond

Chariots of the Gods? Chariots of the Gods? Unsolved Mysteries of the Past (German: Erinnerungen an die Zukunft: Ungelöste Rätsel der Vergangenheit) is a book authored in 1968 by Erich von Däniken. It involves the hypothesis that the technologies and religions of many ancient civilizations were given to them by ancient astronauts who were welcomed as gods. Prior to publication, the book was extensively rewritten by its editor, Wilhelm Roggersdorf (a pen name of the German screenwriter Wilhelm "Utz" Utermann).[1][2][3] Content[edit] Statue from the late Jōmon period (1000 - 400 BC) in Japan, interpreted by Daniken as depicting an alien visitor. The Nazca lines (200 BCE - 700 CE) in Peru, interpreted by Daniken as landing strips for alien visitors. Von Däniken offers the following hypotheses: The existence of structures and artifacts have been found which represent higher technological knowledge than is presumed to have existed at the times they were manufactured. Response[edit] Adaptations[edit] See also[edit]

Brane cosmology Brane cosmology refers to several theories in particle physics and cosmology related to string theory, superstring theory and M-theory. Brane and bulk[edit] The central idea is that the visible, four-dimensional universe is restricted to a brane inside a higher-dimensional space, called the "bulk" (also known as "hyperspace"). If the additional dimensions are compact, then the observed universe contains the extra dimensions, and then no reference to the bulk is appropriate. Why gravity is weak and the cosmological constant is small[edit] Some versions of brane cosmology, based on the large extra dimension idea, can explain the weakness of gravity relative to the other fundamental forces of nature, thus solving the so-called hierarchy problem. Models of brane cosmology[edit] One of the earliest documented attempts to apply brane cosmology as part of a conceptual theory is dated to 1983.[5] The authors discussed the possibility that the Universe has Empirical tests[edit] See also[edit]

Why the Government Is Cagey on UFO Matters Three days ago, The New York Times published what appeared to be a bombshell of a story. The report revealed that, from roughly 2007 through 2012, the Department of Defense ran a small program out of the Defense Intelligence Agency known as the Advanced Aerospace Threat Identification Program. The mission was, in short, to look into UFO reports and assess if any of them represented a threat to the United States. Advertisement - Continue Reading Below While wearing the uniform, I had the opportunity to participate in several very interesting, highly-classified efforts. The fact is that the Department of Defense looks at a huge number of things, from the future effects of global warming to the games that Chinese strategists play as kids that may affect their modes of thinking. Getty This is not the first time the Department of Defense has looked into the issue of UFOs. Sure would be interesting to see what they found though.

Hundreds of Proofs of God’s Existence NOTE: For real proofs of the nonexistence of any god, see "Why Atheism?" For other evidence, go to Atheists of Silicon Valley debate page . Hundreds of Proofs of God’s Existence Formerly: Over Three Hundred Proofs of God’s Existence Originally adapted from a forum on the Internet Infidels . TRANSCENDENTAL ARGUMENT, a.k.a. (1) If reason exists then God exists. (2) Reason exists. (3) Therefore, God exists. COSMOLOGICAL ARGUMENT, a.k.a. (1) If I say something must have a cause, it has a cause. (2) I say the universe must have a cause. (3) Therefore, the universe has a cause. (4) Therefore, God exists. (1) I define God to be X. (2) Since I can conceive of X, X must exist. (1) I can conceive of a perfect God. (2) One of the qualities of perfection is existence. (1) God is either necessary or unnecessary. (2) God is not unnecessary, therefore God must be necessary. ARGUMENT FROM DESIGN, a.k.a. (1) Check out the world/universe/giraffe. (2) Only God could have made them so complex. ARGUMENT FROM BEAUTY, a.k.a.

Pascagoula Abduction The Pascagoula Abduction occurred in 1973 when co-workers Charles Hickson and Calvin Parker claimed that they were abducted by aliens while fishing near Pascagoula, Mississippi. The case earned substantial mass media attention, and is, along with the earlier Hill Abduction, among the best-known claims of alien abduction.[citation needed] The UFO Encounter[edit] A door opened on the ship, they said, and three creatures emerged and seized the men, floating or levitating them into the craft. On the ship, Hickson claimed that he was somehow levitated or hovered a few feet above the floor of the craft, and was examined by what looked like a large football-shaped mechanical eye, about 6 to 8 inches in diameter, that seemed to scan his body. In a later interview over 20 years after the initial incident, Parker's story became much more elaborate. Hickson and Parker contact police[edit] Both men said they were terrified by what had happened. The "Secret Tape"[edit] CALVIN: I passed out.

Alien Hunters to Investigate Mysterious Interstellar Asteroid The first-ever detection of an asteroid from beyond the solar system revealed a remarkable object. About 400 meters long and only 40 meters wide, 'Oumuamua's axis ratio of 10:1 makes it the most elongated asteroid ever discovered. The highest axis ratio we see for asteroids in the solar system is only about 3:1. The odd shape is perhaps a clue about when the asteroid was flung from its own star during the formation of that solar system, or perhaps it can tell us something about what happens to space rocks when they fly through interstellar space for millions of years. Advertisement - Continue Reading Below And of course there is another remote possibility. Avi Loeb, a professor of the Harvard-Smithsonian Center for Astrophysics (CfA) who has written multiple papers on the search for extraterrestrial life, first brought the unique properties of the object to Yuri Milner's attention, suggesting the object could be artificial.

Solway Firth Spaceman Jim Templeton's photograph. The Solway Firth Spaceman (also known as the Solway Spaceman and the Cumberland Spaceman) refers to a figure seen in a photograph taken in 1964 by firefighter, photographer and local historian Jim Templeton (13 February 1920 - 27 November 2011). The famous photo was taken on Burgh Marsh, situated near Burgh by Sands, overlooking the Solway Firth in Cumbria, England. Templeton claims the photograph shows a background figure wearing a space suit and has insisted that he did not see anyone present when the photograph was taken. The image was reproduced widely in contemporary newspapers[1] and gained the interest of ufologists.[2] Photograph[edit] On 23 May 1964, Jim Templeton, a firefighter from Carlisle, Cumberland (now part of Cumbria), took three photographs of his five-year-old daughter while on a day trip to Burgh Marsh.[1] Templeton said the only other people on the marshes that day were a couple of old ladies sitting in a car at the far end of the marsh.

Related:
Related:  UFOs? and Life in the Beyond