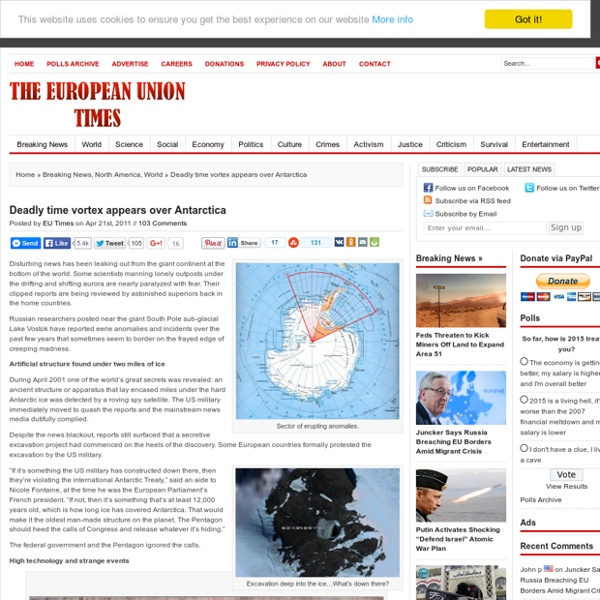 Sector of erupting anomalies. Disturbing news has been leaking out from the giant continent at the bottom of the world. Some scientists manning lonely outposts under the drifting and shifting aurora are nearly paralyzed with fear. Their clipped reports are being reviewed by astonished superiors back in the home countries. Russian researchers posted near the giant South Pole sub-glacial Lake Vostok have reported eerie anomalies and incidents over the past few years that sometimes seem to border on the frayed edge of creeping madness. Artificial structure found under two miles of ice During April 2001 one of the world’s great secrets was revealed: an ancient structure or apparatus that lay encased miles under the hard Antarctic ice was detected by a roving spy satellite. Despite the news blackout, reports still surfaced that a secretive excavation project had commenced on the heels of the discovery. Excavation deep into the ice…What’s down there? High technology and strange events Source

Top 10 Mysteries Surrounding Ancient Aliens Mysteries Ancient aliens is the idea that aliens visited earth in the past. The idea of ancient aliens is not a new one either. Imagination is one of the most powerful tools in humanity’s evolutionary struggle for survival. As a race, we are hardwired to consider important concepts, such as the creation of life on Earth and the history of people on this planet.

When Earth's Human Population Was 18,500! Scientists have calculated that for a period lasting one million years and beginning 1.2 million years ago, at a time when our ancestors were spreading through Africa, Europe and Asia, there were probably between 18,500 to 26,000 individuals capable of breeding (and no more than 26,000). This made them an endangered species with a smaller population than today’s species such as gorillas which number 25,000 breeding individuals and chimpanzees (21,000). Researchers have proposed a number of explanations , such as events in which a significant proportion of the population is killed or prevented from reproducing. The Labyrinth of Messara in Crete - Speleological Research (Speleology: The scientific study of caves) In 1982, members of the Speleological Exploring Hellenic Group (SPELEO) visited the Labyrinth of Messara twice, each visit lasting for several days, during which the cave was explored, photographed and cartographed in detail. The group published its photographical material and text in various newspapers and magazines. Then, two years later, the unforgettable Anna Petrohilou, known as the Lady of Greek Speleology, led a team from the Hellenic Speleological Society on a visit to the cave. Its entrances were opened and the speleologists started accumulating vast amount of data.

Ancient City Found in India, Irradiated from Atomic Blast Radiation still so intense, the area is highly dangerous. A heavy layer of radioactive ash in Rajasthan, India, covers a three-square mile area, ten miles west of Jodhpur. Scientists are investigating the site, where a housing development was being built. Lost World under the North Sea It also serves as a warning for the scale of impact that climate change can cause, Professor Gaffney says. Human communities would have lost their homelands as the rising water began to encroach upon the wide, low-lying plains. "At times this change would have been insidious and slow - but at times, it could have been terrifyingly fast. It would have been very traumatic for these people," he says. [Some of the advances by the sea would have been similar to the widespread flooding of the English East Coast in 1953. That happened overnight as a result of strong winds and a particularly high tide, but in the case of the North Sea plains the floodwaters would not have receded - at least not completely, and not permanently.]

Malta Temple's and Tombs The HYPOGEUM which I was able to visit in 1989 is now closed for conservation since 1992 - and is still closed. Just beneath the southern tip of Italy, in the extreme western part of the Mediterranean sea, lies the island of Malta. In the past Malta has been the possession of many nationalities, and has been considered to be one of the most strategic areas on earth, being a port and an intersecting point between Europe, Asia, the Middle East, and Africa, etc. This 9-mile-long island was an ancient center of civilization at the time when the Phoenicians from Carthage invaded and began to rule it. Near the floor of the last chamber, within the 3rd and last (officially recognized) sub-level of these ancient catacombs, there are a few so-called "burial chambers".

Project Avalon - Klaus Dona: The Hidden History of the Human Race - StumbleUpon Click here for the PDF version of this interview (20 pages) Click here for the video presentation March 2010 **Ed note: Some transcripts contain words or phrases that are inaudible or difficult to hear and are, therefore, designated in square brackets. Ancient underwater cities being found that are 10,000 years old Lost city 'could rewrite history' By BBC News Online's Tom Housden The remains of what has been described as a huge lost city may force historians and archaeologists to radically reconsider their view of ancient human history. Marine scientists say archaeological remains discovered 36 meters (120 feet) underwater in the Gulf of Cambay off the western coast of India could be over 9,000 years old.

Amazing Places To Experience Around The Globe (Part 2) Tian Tan Buddha on Lantau Island, Hong Kong Fernando De Noronha - Brazil Spirit Island, Magligne Lake, Alberta, Canada Rice Field Terraces in Yunnan, China Bern, Switzerland Atlantis or Someone Else? The report is about an Earth based scenario, a combination of the possibilities inherent in a background Earth story, some possible hypotheses by me, and then some visual evidence to add into the mix. It will be up to you to decide if there is any merit. First we'll start with the background story. In more modern times, the story of ancient Atlantis has fascinated generations and some to obsession as a real place.

"Dinosaur and Human Tracks Found Together, Page 3" This is an unusual and remarkable petroglyph of what appears to be a fire-breathing dragon! Did this Anasazi artist just have a wild imagination or did he see something that we don't see in our world today? Dr. Don Patton is shown here with an Indian rock art that he believes depicts a Triceratops dinosaur. Do these mysterious stones mark the site of the Garden of Eden? By Tom Knox Updated: 11:10 GMT, 5 March 2009 For the old Kurdish shepherd, it was just another burning hot day in the rolling plains of eastern Turkey.

Kunlun Mountains The Kunlun Mountains (simplified Chinese: 昆仑山; traditional Chinese: 崑崙山; pinyin: Kūnlún Shān; Wade–Giles: K'un1-lun2 Shan1, pronounced [kʰu̯ə́nlu̯ə̌n ʂán]; Mongolian: Хөндлөн Уулс Hundlun) are one of the longest mountain chains in Asia, extending more than 3,000 km. In the broadest sense, it forms the northern edge of the Tibetan Plateau south of the Tarim Basin and the Gansu Corridor and continues east south of the Wei River to end at the North China Plain. The exact definition of this range seems to vary.

Ley-lines There are several developed theories on the purpose of ley-lines, many of which offer valid potential; something which in itself illustrates the complexity of unravelling the myriad of alignments from several millennia of activity. It is likely that ley-lines are a product of different elements from several of the following theories, being created at different times, for different purposes. The following examples are the current contenders for explaining how such a dedication to straight-lines has led mankind its present position.