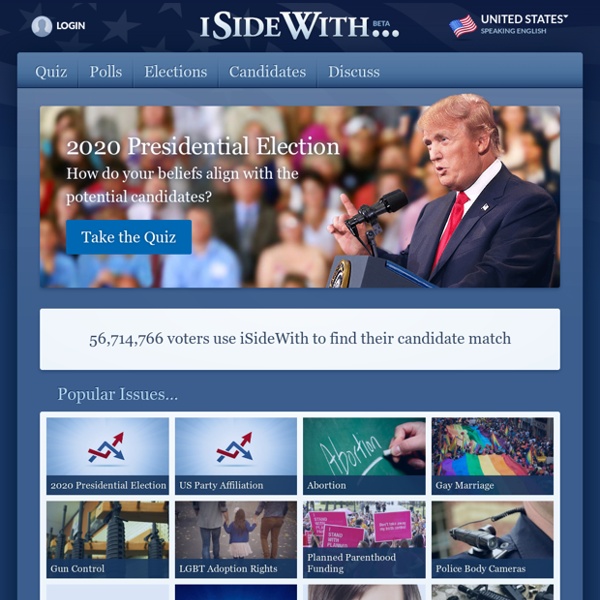 European Press and the Presidential Election The outcome of the US presidential election affects the lives of millions of people around the world. So it's probably not surprising that many Europeans are resentful that only Americans will have a say in it. European media are saturated with election coverage that is heavily biased in favor of the Democrats.

Poison Pill ID: Welcome to Pill ID Use our Pill Identifier to figure out: What's this pill I just found in my teen's pocket?Was my prescription filled correctly? It looks different.My pills are mixed up. Which pill should I take? Blue Feed, Red Feed What is this? Recent posts from sources where the majority of shared articles aligned “very liberal” (blue, on the left) and “very conservative” (red, on the right) in a large Facebook study. In 2015, the journal Science published a research paper by Facebook scientists (Bakshy, Eytan; Messing, Solomon; Adamic, Lada, 2015, “Replication Data for: Exposure to Ideologically Diverse News and Opinion on Facebook”, Harvard Dataverse, V2) which looked at how a subset of the social network’s users reacted to the news appearing in their feeds. For six months, Facebook tracked and analyzed the content shared by 10.1 million of its users (who were anonymized).

Election Idioms Step 2 Take a few moments to listen to the dialogue. Can you guess the meaning of the idioms based on the context? Tips for Teachers: Dealing with Plagiarism — The Learning Scientists 1) Teach students about plagiarism in the classroom, even if they should have "learned it" already. Repetition of information, especially spaced repetition (1), improves learning. Learning about plagiarism is no different. Past a certain point, it seems reasonable to expect that students know not to turn in someone else’s paper, or not to copy full paragraphs word-for-word into their papers.

On August 26 2020, the Project Gutenberg website underwent some major changes. These changes had been previewed since early 2020, and visitors to the old site were invited to try the new site, including giving input via a brief survey. The old site is no longer available. Election Issues Of 2016: Education College affordability, the Common Core and teacher evaluations are shaping up to be major issues in the 2016 presidential election. Election Issues Of 2016: Education. (Video via U.S. Department of Education) Donald Trump vs Hillary Clinton on List of political stances Immigration issues Should the government increase or decrease the amount of temporary work visas given to high-skilled immigrant workers? stats discuss Donald Trump’s answer: Decrease, companies are currently taking advantage of this program to decrease wages Because it is a mess. I think for a period of a year to two years we have to look back and we have to see, just to answer the second part of your question, where we are, where we stand, what's going...Source Hillary Clinton’s answer: Increase, our economy relies on businesses hiring the highest skilled workers at the lowest cost Clinton, too, supports an increase in the cap.

World's Virtual Library (80,000+ FREE eBooks, eTexts, On-Line Books, eDocuments) n Welcome! Over the last decade, a quiet revolution has been going on in the development of a large library of "digital" or "electronic" books. While there are still large gaps, a very substantial body of "Western" thought is available in the form of downloadable or on-line books. Most major writers, from Plato to Hemingway, Fitzgerald, Proust, or John Le Carre, are accessible on the Internet. Compare the Candidates: Where Do Clinton and Trump Stand on Education Issues? July 15, 2016 | Updated: August 2, 2016 The Democratic nominee for president, Hillary Clinton, and Republican nominee Donald Trump have yet to release comprehensive K-12 policy plans. To give a sense of where they stand, Education Week reviewed their statements, proposals, and positions on a dozen education policy issues, from school choice to school safety.

Is Google Making Us Stupid? The process of adapting to new intellectual technologies is reflected in the changing metaphors we use to explain ourselves to ourselves. When the mechanical clock arrived, people began thinking of their brains as operating “like clockwork.” Today, in the age of software, we have come to think of them as operating “like computers.” But the changes, neuroscience tells us, go much deeper than metaphor. Thanks to our brain’s plasticity, the adaptation occurs also at a biological level. The Internet promises to have particularly far-reaching effects on cognition.