The US election system

Caucus vs. Primary. A: In presidential campaigns, a caucus is a system of local gatherings where voters decide which candidate to support and select delegates for nominating conventions. 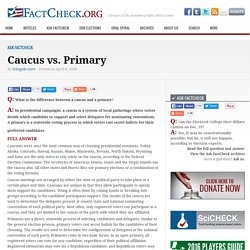 A primary is a statewide voting process in which voters cast secret ballots for their preferred candidates. Caucuses were once the most common way of choosing presidential nominees. Today, Alaska, Colorado, Hawaii, Kansas, Maine, Minnesota, Nevada, North Dakota, Wyoming and Iowa are the only states to rely solely on the caucus, according to the Federal Election Commission. The territories of American Samoa, Guam and the Virgin Islands use the caucus also. All other states and Puerto Rico use primary elections or a combination of the voting formats. Caucus meetings are arranged by either the state or political party to take place at a certain place and time. Primaries are a direct, statewide process of selecting candidates and delegates. . 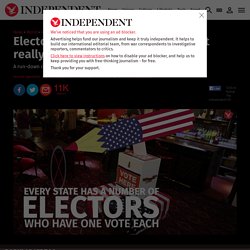 Here is a run-down of the US Electoral College voting system and why it matters so much. How does the Electoral College system work? The US president is not directly chosen by voters, but by ‘electors’ that people in a state vote for. The more people in a state, the more electors an area has. For example, Texas has a population of 25 million and is afforded 38 Electoral College votes, while Delaware has a population of 936,000 and has only three votes. There are 538 electors in total, corresponding to 435 members of Congress, 100 Senators and three additional electors for the District of Columbia. Almost every state chooses to allocate all its Electoral College votes to whoever comes in first place statewide, regardless of their margin of victory. Whoever gets to 270 electoral votes first – the majority of the 578 total votes – wins the election. Play Video Close. How America Elects: U.S. Political Parties. Interesting Facts About The History Of Presidential Debates In The United States.

Want to Run for Office. Road to the White House. How does the US electoral college work? – video. How to Become President of the United States. Electing a us president (7948) VOA Learning English - U.S. Elections 2016 VOA - Voice of America English News. US Presidential Election explained.

What Is The Electoral College And Why Does The United States Use It? Here's a little information that Americans have usually been able to ignore. 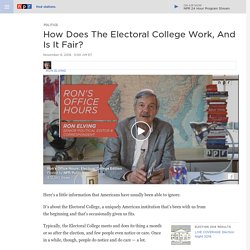 It's about the Electoral College, a uniquely American institution that's been with us from the beginning and that's occasionally given us fits. Typically, the Electoral College meets and does its thing a month or so after the election, and few people even notice or care. Once in a while, though, people do notice and do care — a lot. Will 2016 be one of those years? It's not something reasonable people would hope for, but it cannot be ruled out. First, the basics. How It Works Despite popular belief, the U.S. When each state certifies a winner of its overall popular vote, that winner is entitled to send all his or her electors to that state's Capitol, where they will officially record their votes for their candidate. In these proceedings in the states, the winner of the statewide popular vote generally takes all the Electoral College votes, a rule stretching back to 1824.

Is It Fair? What Happens In A Tie? Election Printables. Ask the Candidate Have students complete a graphic organizer. 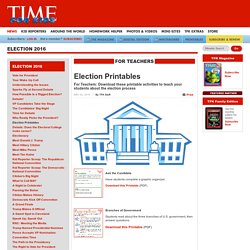 2016 Presidential Election. “Democracy cannot succeed unless those who express their choice are prepared to choose wisely. 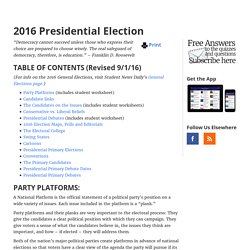 The real safeguard of democracy, therefore, is education.” – Franklin D. Roosevelt TABLE OF CONTENTS (Revised 9/1/16) (For info on the 2016 General Elections, visit Student News Daily’s General Elections page.) A National Platform is the official statement of a political party’s position on a wide variety of issues. Party platforms and their planks are very important to the electoral process: They give the candidates a clear political position with which they can campaign. Both of the nation’s major political parties create platforms in advance of national elections so that voters have a clear view of the agenda the party will pursue if its members are elected to office.