Third Debate: As Trump blunders on accepting the election result, the contest is now Clinton’s to lose. Last night saw the third and final presidential election debate between Donald Trump and Hillary Clinton. 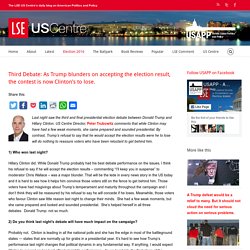 US Centre Director, Peter Trubowitz comments that while Clinton may have had a few weak moments, she came prepared and sounded presidential. By contrast, Trump’s refusal to say that he would accept the election results were he to lose will do nothing to reassure voters who have been reluctant to get behind him. 1) Who won last night? Hillary Clinton did. Trump won the third debate. Hillary Clinton’s 3 debate performances left the Trump campaign in ruins.

‘The Election Ended Wednesday Night’ In the third and final debate of this wild presidential election season, Donald Trump promised on Wednesday to deport “some bad hombres” from the United States, accused Hillary Clinton’s campaign of sabotage and called his opponent a “nasty woman.” 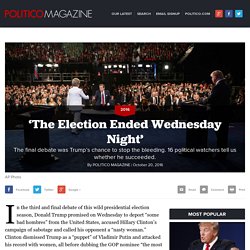 Clinton dismissed Trump as a “puppet” of Vladimir Putin and attacked his record with women, all before dubbing the GOP nominee “the most dangerous person to run for president in the modern history of America.” It was all pretty much routine in a campaign marked more by put-downs than policy discussion—or at least it was until Trump broke with centuries of tradition and told the audience that he wasn’t sure whether he would accept the voting results on Election Day.

It was an admission that shocked—but also one not likely to be uttered by a candidate who’s confident, or even halfway confident, of a win on November 8. Story Continued Below Unlike Donald Trump, I won’t keep you in suspense. Memorable lines of the final presidential debate. Photo illustration by Slate. 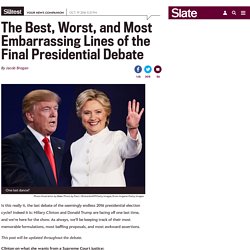 Photo by Paul J. Richards/AFP/Getty Images, Drew Angerer/Getty Images. Is this really it, the last debate of the seemingly endless 2016 presidential election cycle? Indeed it is: Hillary Clinton and Donald Trump are facing off one last time, and we’re here for the show. As always, we’ll be keeping track of their most memorable formulations, most baffling proposals, and most awkward assertions. The bad news for Donald Trump: Third debates don’t move the polls. The Trump Taj Mahal casino resort is seen in Atlantic City, New Jersey, on May 8, 2016. 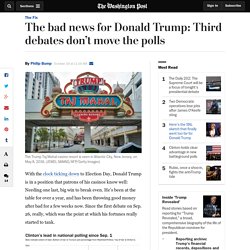 (JEWEL SAMAD/AFP/Getty Images) With the clock ticking down to Election Day, Donald Trump is in a position that patrons of his casinos know well: Needing one last, big win to break even. He's been at the table for over a year, and has been throwing good money after bad for a few weeks now. Since the first debate on Sep. 26, really, which was the point at which his fortunes really started to tank. Trump's problem is that making up that difference on a single hand is a long-shot, no matter what. Gallup polls debate viewers to get a sense of how they think the candidates fared. Everything you need to know about Trump and Clinton’s third 2016 presidential debate. When is the third debate between Hillary Clinton and Donald Trump? 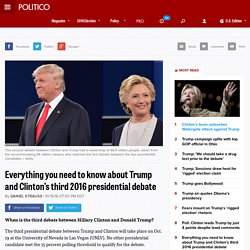 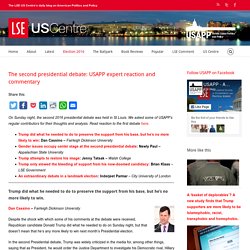 We asked some of USAPP’s regular contributors for their thoughts and analysis. Read reaction to the first debate here. Trump did what he needed to do to preserve the support from his base, but he’s no more likely to win. Dan Cassino – Fairleigh Dickinson University. Vice Presidents are a heartbeat from the Oval Office, but matter very little. Last night Virginia Senator Tim Kaine and Indiana Governor Mike Pence met in the only vice-presidential debate of the 2016 election. 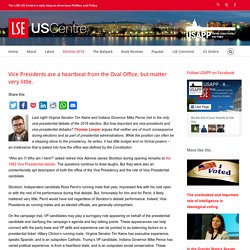 But how important are vice-presidents and vice-presidential debates? Thomas Leeper argues that neither are of much consequence during elections and as part of presidential administrations. While the position can often be a stepping stone to the presidency, he writes, it has little budget and no formal powers – an irrelevance that is baked into how the office was defined by the Constitution. “Who am I? Why am I here?” Stockton, independent candidate Ross Perot’s running mate that year, impressed few with his cold open or with the rest of his performance during that debate. TV audience sharply down for second Trump-Clinton debate, despite tape furor. The Lowest Moment in the History of Debates? Everyone expected Sunday night’s town hall debate to get ugly. 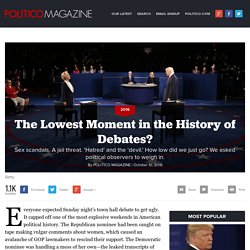 It capped off one of the most explosive weekends in American political history. The Republican nominee had been caught on tape making vulgar comments about women, which caused an avalanche of GOP lawmakers to rescind their support. Second Presidential Debate: 11 Moments That Mattered. The second presidential debate came at the end of a tumultuous and unprecedented week on the campaign trail, and the battle between Hillary Clinton and Donald Trump reflected every bit of that drama. 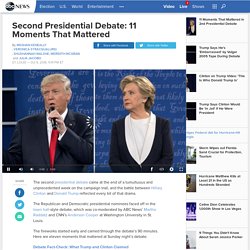 The Republican and Democratic presidential nominees faced off in the town hall-style debate, which was co-moderated by ABC News’ Martha Raddatz and CNN’s Anderson Cooper at Washington University in St. Louis. Everything you need to know about Trump and Clinton’s second 2016 presidential debate. When is the second debate between Hillary Clinton and Donald Trump? 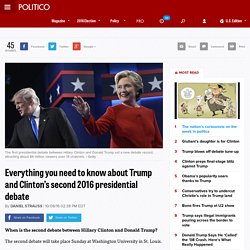 The second debate will take place Sunday at Washington University in St. Louis. Story Continued Below. The Key Moments From the Vice Presidential Debate. David Goldman/ZUMA In a debate that was expected to have none of the fireworks of last week's presidential face-off, the two vice presidential nominees embraced their attack-dog roles Tuesday in a sparring match that was less about the men on stage than about Donald Trump. Democratic Sen. Tim Kaine of Virginia used the debate in his home state to slam Trump repeatedly over his refusal to release his tax returns and his surprising comments about nuclear proliferation. Republican Gov. Mike Pence of Indiana, in turn, tried to dodge most of the attacks Kaine lobbed his way and used them to accuse Kaine of running an "insult-driven" campaign. It was a messy, chaotic affair for two vice presidential hopefuls, both thought to be more mellow than their running mates.

Is Hillary in a No-Win Situation? I’ve watched every presidential debate ever broadcast, including the little-remembered John F. Kennedy-Hubert Humphrey contest just before the 1960 West Virginia primary, and for nearly 40 years I've analyzed how candidates win and lose them. But when I ask myself what kind of strategy I would devise for Hillary Clinton tonight against Donald Trump, I’m pretty much baffled. The problem is not just the unpredictable (to put it mildly) nature of her opponent. Shrewd Trump vs. Studied Clinton in First Debate. Shrewd Trump vs.

Studied Clinton in First Debate Share Video Hillary Clinton and her campaign team have pored over hours of video showing Donald Trump debating his GOP primary opponents, sparring with television moderators, and skewering “Crooked Hillary” from the stump. “I think this will be a difficult, challenging debate,” Clinton told reporters a few weeks ago. “I take nothing for granted. … I’m doing my homework.”

Third-party candidates excluded from presidential debates: a snub too many. Free speech in the United States is having a rough go of it lately. Everywhere I turn, there’s some misanthrope whinging about San Francisco 49ers quarterback Colin Kaepernick’s Star-Spangled Banner protest. How dare he denigrate the stars and stripes, a venerable symbol of protest against tyranny, by protesting? Then there’s the third-party candidates running for president. Libertarian Gary Johnson and Green party candidate Dr Jill Stein, despite surprisingly potent campaigns that are tapping into wellsprings of dissatisfaction with the status quo, will very likely be held out of the upcoming debates.

They’re still free to campaign and, because they’re not black NFL players, they can go about saying what they please. Ladies and gentlemen of the American electorate, it’s finally time for you to rise up and demand that third-party presidential candidates be allowed to debate with their Republican and Democratic peers. When desperation sets in, it’s natural to behave irrationally. Nearly a Quarter of Americans Say Presidential Debates Could Sway Their Vote.

Nearly a quarter of Americans say the candidates' performances in the upcoming presidential debates may have a major impact on their vote in the November election. ABC News together with our partners at SSRS survey research firm asked our online opinion panel about the upcoming presidential debates, the first of which takes place in just two weeks. Almost one-fourth of respondents, 23 percent, said they expect the debates between Democratic nominee Hillary Clinton and Republican nominee Donald Trump to have a major impact on their choice for president. With the audience expected to be the largest in history, that group could potentially swing a close race. An overwhelming majority of respondents, 74 percent, said they are likely to watch the first debate, which will be held on Monday, Sept. 26 at Hofstra University in Hempstead, New York. See full results. It is undemocratic to exclude me and Gary Johnson from presidential debates. Presidential debates should be an opportunity for the American people to decide the direction of our nation.

But since 1987, everything about the debates has been predetermined by the party bosses who run Washington. Consider that 76% of Americans want the presidential debates to include Gary Johnson and me. How to Win a Debate With Mind Games and Dirty Tricks. Before the cameras go live at the presidential debate on on Monday night, the mind games have already begun. The telegraphed punches, false tells, attempts to get inside the other candidate’s head. Every great competitor has his or her trick of choice—an unexpected move to rattle their opponents and throw them off their game. Story Continued Below Mind games are familiar to every sports fan, whether those tricks take the form of haka-dancing rugby players, sleeveless linemen in sub-zero temperatures, or a menacing stare-down.

“I keep my eyes on him,” said Mike Tyson, describing his pre-boxing match ritual.