5 Videos to Help Students Understand the Electoral College. A new President of the United States will be chosen tomorrow, kind of. 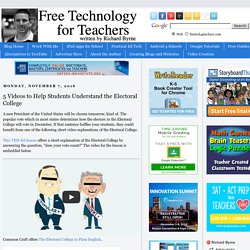 ThinkCERCA Resources & Activities for Election 2016. As the countdown to the election draws nearer, and as many private emails from Hillary Clinton’s associates reach the public, increased scrutiny has been raised about the legitimacy of the Clinton Foundation. 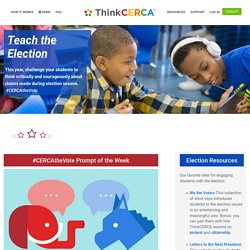 During the final debate, moderator Chris Wallace pressed Hillary Clinton to answer whether foreign donors to her family’s foundation participated in “pay to play” – that is, if they gained direct access to America’s Secretary of State by donating large sums of money to the Clinton Foundation. [Related: Does Donald Trump’s claim of a ‘rigged election’ hold up?] While Clinton has vehemently denied any wrongdoing on the part of her family’s foundation, Wallace’s question was a notable moment in the debate when Clinton seemed to avoid a direct response (as parodied by Saturday Night Live). Students will be electing Carter or Reagan or maybe even Duck or Grace as president - Rome News-Tribune: Local. Kids across Floyd County have been learning about voting this year, and after a tough two months on the campaign trail, they will cast their ballots on Nov. 8. 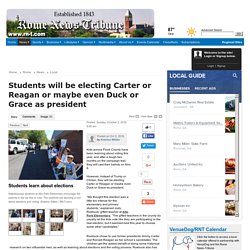 However, instead of Trump or Clinton, they will be electing Carter or Reagan or maybe even Duck or Grace as president. “We thought this election was a little too intense for the elementary and primary students,” explained Judy Roebuck, gifted teacher at Alto Park Elementary. Teaching about the Elections. = NCSS Members-only resource For Secondary/High School from Social Education Teaching in the Time of Trump Socialism in the United States: Hidden in Plain Sight. 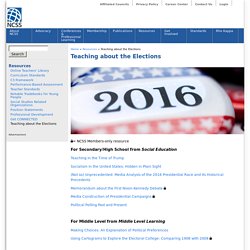 Campaign 2016. This section of the website, developed by our 2015 Summer Teacher Fellows, provides explanations of the various aspects of the election process for candidates vying to become the next President of the United States. 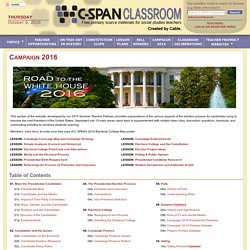 Separated into 10 main areas, each topic is supplemented with related video clips, discussion questions, handouts, and culminating activities to reinforce students' learning. Members, click here, to order your free copy of C-SPAN's 2016 Electoral College Map poster. Table of Contents 01. PBS Election. You Choose 2016 - PBS KIDS. Break the Election with MediaBreaker/Studios. Redesigning Civic Education for the Digital Age. “Redesigning Civic Education for the Digital Age,” a recent article in Theory and Research in Social Education, provides an overview of the core principles and practices of the Educating for Participatory Politics (EPP) project from two researchers at Mills College and Elyse Eidman-Aadahl, Executive Director of the National Writing Project. 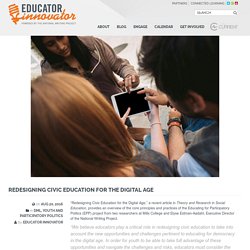 “We believe educators play a critical role in redesigning civic education to take into account the new opportunities and challenges pertinent to educating for democracy in the digital age. An Invitation to Share Ideas: How Will You Be Teaching Election 2016? As an unusual election season creates unique challenges for civic education, our partner The New York Times Learning Network wants to know, how do you plan to teach the 2016 presidential election? 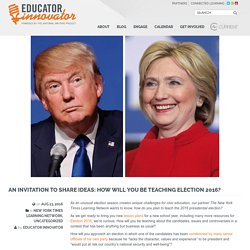 As we get ready to bring you new lesson plans for a new school year, including many more resources for Election 2016, we’re curious: How will you be teaching about the candidates, issues and controversies in a contest that has been anything but business as usual? How will you approach an election in which one of the candidates has been condemned by many senior officials of his own party because he “lacks the character, values and experience” to be president and “would put at risk our country’s national security and well-being”? How will you teach about a contest in which the candidates are more unpopular than those in any of the past 10 White House matchups, and were chosen as nominees by only 9 percent of the nation? 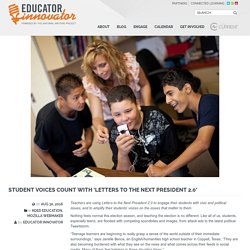 Nothing feels normal this election season, and teaching the election is no different. Like all of us, students, especially teens, are flooded with competing soundbites and images, from attack ads to the latest political Tweetstorm. “Teenage learners are beginning to really grasp a sense of the world outside of their immediate surroundings,” says Janelle Bence, an English/humanities high school teacher in Coppell, Texas. “They are also becoming burdened with what they see on the news and what comes across their feeds in social media. Many of them feel helpless in these daunting times.” As schools open across the country, innovative teachers are looking for ways to combine students’ growing media savvy with their burgeoning political awareness.

Letters to the Next President 2.0. Glogin?URI= Ways to Talk with Adolescents about Politics. How the Presidential Race is Embracing Interactive Content. Dubbed “the social media election” by Fortune, the current US presidential race could very well be about who tweets their way to the White House. 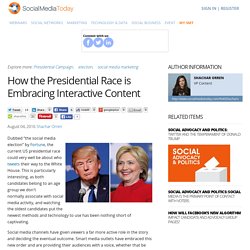 This is particularly interesting, as both candidates belong to an age group we don't normally associate with social media activity, and watching the oldest candidates put the newest methods and technology to use has been nothing short of captivating. Social media channels have given viewers a far more active role in the story and deciding the eventual outcome. Smart media outlets have embraced this new order and are providing their audiences with a voice, whether that be through social media or on-site. Here at Playbuzz, we've closely followed the steps taken by candidates and the media to stand out this election season and we've noticed that many have utilized innovative content formats to garner the attention of voters. When an industry goes through major changes, there are those who try and fight it and those who move forward with it.

The Election and the Educator. Demonstrating Fairness Justice Ruth Bader Ginsburg's entry into the political fray with her comments about presidential candidate Donald Trump raises the issue of whether a Supreme Court justice should share her opinions about in-progress political campaigns. 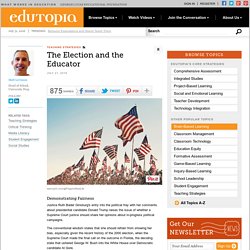 10 Ways to Engage Summer Learners in the Election. Letters to the Next President 2.0. Newsela and Rock The Vote Team Up for 'Students Vote 2016' PBS Election. Introductions and Debates (Beginning - Jan. 31, 2016) The candidates have built their campaign staffs and fundraising networks. Now it’s time to meet the voters. Candidates focus their personal appearances on the states that vote earliest—Iowa, New Hampshire and South Carolina—and try to build national followings through the party-sanctioned televised debates. February—Voting Begins (Feb. 1, 2016 - Feb. 29, 2016) Four states take the spotlight in February—Iowa, New Hampshire, Nevada and South Carolina—as the nominating contests begin.