Provincial_results. More than 90,000 students under the voting age cast ballots in Student Vote Alberta for the 2015 provincial election. 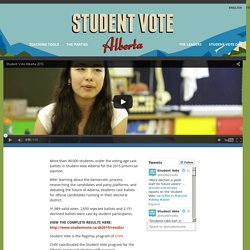 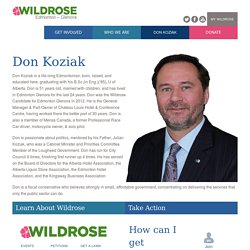 (in Eng.)(‘85), U of Alberta. Don is 51 years old, married with children, and has lived in Edmonton Glenora for the last 24 years. Don was the Wildrose Candidate for Edmonton Glenora in 2012. He is the General Manager & Part-Owner of Chateau Louis Hotel & Conference Centre, having worked there the better part of 30 years. Don is passionate about politics, mentored by his Father, Julian Koziak, who was a Cabinet Minister and Priorities Committee Member of the Lougheed Government. Don is a fiscal conservative who believes strongly in small, affordable government, concentrating on delivering the services that only the public sector can do.

Chris Vilcsak - Alberta Party Candidate in Edmonton-Glenora. Web chris4glenora.caphone (780) 488-4804 Born and raised in Edmonton and area, Chris has connections to the Glenora community that go back to his earliest childhood. 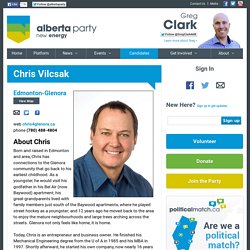 As a youngster, he would visit his godfather in his Bel Air (now Baywood) apartment; his great-grandparents lived with family members just south of the Baywood apartments, where he played street hockey as a youngster; and 12 years ago he moved back to the area to enjoy the mature neighbourhoods and large trees arching across the streets. Glenora not only feels like home, it is home. Today, Chris is an entrepreneur and business owner. He finished his Mechanical Engineering degree from the U of A in 1985 and his MBA in 1997. Chris has also served on local boards, including the Edmonton Chamber of Commerce (winning Small Business Owner of the Year award in 2005), the Edmonton Fencing Club, and BOMA Edmonton (the Building Owners and Managers Association). Karen Sevcik - Alberta Liberal Party. My name is Karen Sevcik. 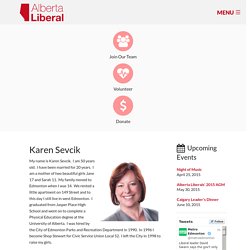 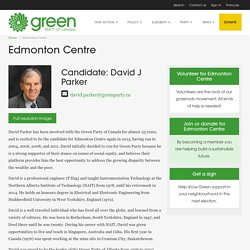 David initially decided to run for Green Party because he is a strong supporter of their stance on issues of social equity, and believes their platform provides him the best opportunity to address the growing disparity between the wealthy and the poor. David is a professional engineer (P.Eng) and taught Instrumentation Technology at the Northern Alberta Institute of Technology (NAIT) from 1978, until his retirement in 2014. He holds an honours degree in Electrical and Electronic Engineering from Huddersfield University in West Yorkshire, England (1972). David is a well traveled individual who has lived all over the globe, and learned from a variety of cultures. 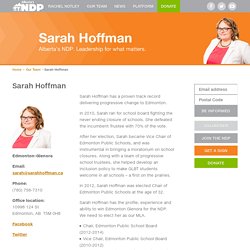 In 2010, Sarah ran for school board fighting the never ending closure of schools. She defeated the incumbent Trustee with 70% of the vote. After her election, Sarah became Vice Chair of Edmonton Public Schools, and was instrumental in bringing a moratorium on school closures. Along with a team of progressive school trustees, she helped develop an inclusion policy to make GLBT students welcome in all schools – a first on the prairies. In 2012, Sarah Hoffman was elected Chair of Edmonton Public Schools at the age of 32. Sarah Hoffman has the profile, experience and ability to win Edmonton Glenora for the NDP. Alberta MLA Edmonton-Glenora. Untitled. Student Vote Alberta 2015.