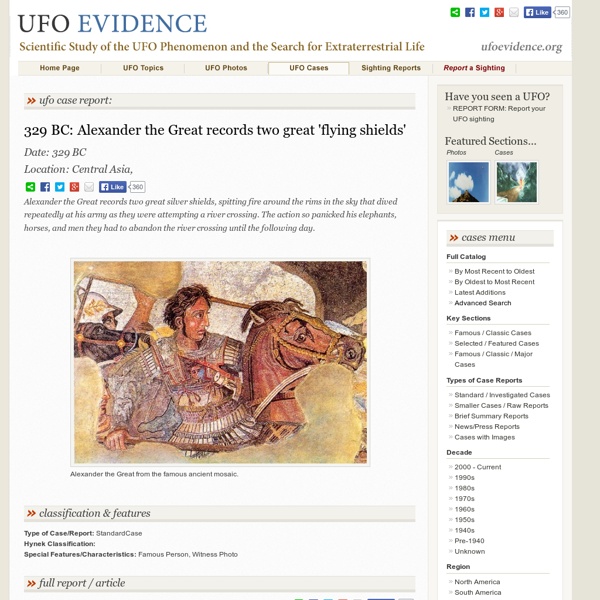 Alexander the Great from the famous ancient mosaic. Classification & Features Type of Case/Report: StandardCase Hynek Classification: Special Features/Characteristics: Famous Person, Witness Photo Full Report / Article Source: Bruno Mancusi, UFO Updates mailing list, Apr. 18, 2003 [go to original source] Alexander the Great records two great silver shields, spitting fire around the rims in the sky that dived repeatedly at his army as they were attempting a river crossing. UFO researcher Bruno Mancusi, in a posting on the UFO Updates mailing list from April 18, 2003, gives the following references to this event. I had an e-mails exchange in 2001 with a Macedonian historian, Aleksandar Donski, about this tale. 1. Alexander the Great was not the first to see them nor was he the first to find them troublesome. Unfortunately, there is no reference. 2. "L'assedio di Tiro Durante l'assedio di Tiro nell'anno 332 a. (See English translation by Drake below.) 3. THE CATALOGUE-(i) B.C. 1. 4. 5.

Introduction to Hindu Mythology Hindu religion is more philosophy than doctrine. There is no authoritative hierarchy of clergy; the religion is highly decentralized with multiple sects, perfectly acceptable to Hinduism (in contrast to the regrettable divisions within Christianity). The Hindu claim that there are different paths for each person. A practical definition of Hinduism: performing the duty (dharma) of one's stage in life and social status (caste). The essence of the Hindu vision of reality lies in the tension between dharma (social duty or righteousness) and moksha (release from the material world, final liberation from the endless cycles of rebirth). Both these perspectives, the world-supporting and the world-denying, are necessary to fulfill human destiny. Other important terms : karma = moral law of cause and effect (deeds of past lives determine present) samsara = rebirth according to the nature of a person's karma; what we are now is the sum of all we have done in the past. Dharma and caste Cycles of time

Greek Gods Family Tree / Genealogy | ludios.org ludios.org Mythical Chronology of Greece This Mythical Chronology of Greece depicts the traditional chronology established for the events of ancient Greek mythology by ancient chronographers and mythographers. This list largely reflects the work of Saint Jerome, whose work in turn was based primarily on the analysis of Apollodorus, Diodorus Siculus, and Eusebius. [1] In a few cases, the chronology also reflects the opinions of more recent scholars, who have cross referenced the mythology to archeological discoveries. These interpolations are noted with italics. Although the Greeks did believe that much of their mythology was grounded in fact, this list is not intended to imply the literal existence of real-world parallels to all the characters listed below. The dates below are approximate. Timeline The ages referenced in this section are the five Ages of Man of Hesiod. Before Hesiod's ages: The Birth of the World (1800BC-1710BC) Chaos gives birth to Gaia Gaia gives birth to Uranus Uranus rapes Gaia. Cronos becomes ruler of Greece.

Epic of Creation (Mesopotamia) | Thematic Essay Stories describing creation are prominent in many cultures of the world. In Mesopotamia, the surviving evidence from the third millennium to the end of the first millennium B.C. indicates that although many of the gods were associated with natural forces, no single myth addressed issues of initial creation. It was simply assumed that the gods existed before the world was formed. Unfortunately, very little survives of Sumerian literature from the third millennium B.C. Several fragmentary tablets contain references to a time before the pantheon of the gods, when only the Earth (Sumerian: ki) and Heavens (Sumerian: an) existed. A Sumerian myth known today as "Gilgamesh and the Netherworld" opens with a mythological prologue. The origins of humans are described in another early second-millennium Sumerian poem, "The Song of the Hoe." In the Sumerian poem "The Debate between Grain and Sheep," the earth first appeared barren, without grain, sheep, or goats.

gods? Here is a part from a text which you can find at : It seems that the Pleiadeans who speak here tell us that Mankind was in a much better state before the Annunaki-gods arrived. These 'gods' just tore up our D.N.A. in order to be able to use us for their own purposes. An original plan that was made by prior gods is given, the plan of the 'LIVING LIBRARY'. "Mankind is an experiment. And so, these extensions of the prime creator went out, and began to experiment with the Prime Creator's energy as it existed within themselves. Now, these energies-- we will call them Gods -- Creator Gods -- went out, and began to create their own hierarchy. So, the original plan was brought about, and let us say that there was impeccable scurrying and shuffling -- all kinds of things -- to bring about individual representatives of all of the galaxies, so that they could have their representatives here upon this planet. When we speak of Light.