Godchecker.com - Your Guide To The Gods 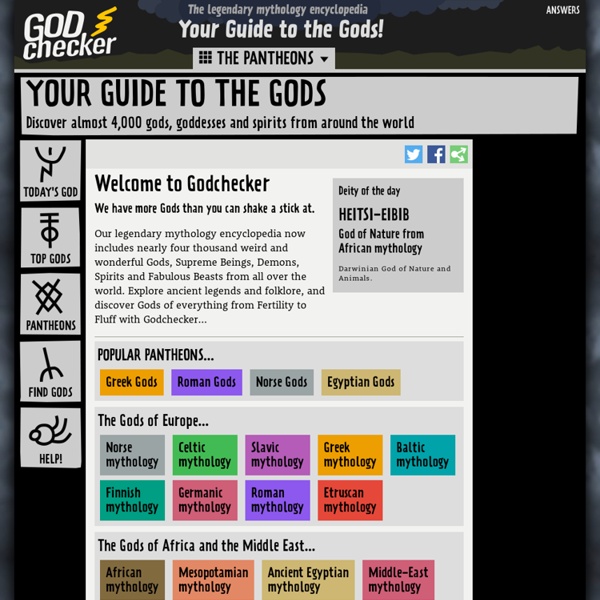 We have more Gods and Goddesses than you can shake a stick at. Our Mythology Encyclopedia features over 3,700 weird and wonderful Supreme Beings, Demons, Spirits and Fabulous Beasts from all over the world. Explore ancient legends and folklore, and discover Gods of everything from Fertility to Fluff with Godchecker... Mythology Encyclopedia. Browse the pantheons of mythology and meet weird and wonderful Gods from around the world. We're adding new information all the time as our mythology database expands to infinite size.

List of Catholic Heresies and Human Traditions ADOPTED and PERPETUATED by the ROMAN CATHOLIC CHURCH IN THE COURSE OF 1600 YEARS (Compiled by Rev. Stephen L. Testa) Medusa In Greek mythology Medusa ("guardian, protectress")[1] was a monster, a Gorgon, generally described as having the face of a hideous human female with living venomous snakes in place of hair. Gazing directly upon her would turn onlookers to stone. Most sources describe her as the daughter of Phorcys and Ceto,[2] though the author Hyginus (Fabulae, 151) interposes a generation and gives Medusa another chthonic pair as parents.[3] Medusa was beheaded by the hero Perseus, who thereafter used her head as a weapon[4] until he gave it to the goddess Athena to place on her shield.

Internet Book of Shadows Index This is a large (+9Mb) collection of articles related to Neo-Paganism which can be found archived at a number of FTP sites (for instance, here). This is a collection of posts to bulletin boards from the late eighties to the mid nineties, essentially predating the modern Internet. According to a recent communication, the original editor of this archive was Durwydd mac Tara at PODS net. What Is A Modern Myth? I’ve had many discussions with people over the past few years about why myth is important. Much of these discussions come down to a misunderstanding about what the word “myth” means, so what could have been an interesting discussion about politics, permaculture, literature (or sex or food for that matter) becomes a lesson in semantics. I’d like to avoid rehashing that argument, and toward that end, give a definition of myth that all of us can wrap our heads around. And I hope as a result of it you will see why this is such a crucial issue to explore, as it has relevance in regard to every other discipline of study.

Pythagorean Tarot An Interpretation of the Major and Minor Arcana on Pythagorean and Alchemical Principles © 1996, John Opsopaus (Ioannes Apollonius Opsopaus) Special News! The Pythagorean Tarot book (480 pages) and 78-card deck set has been published by Llewellyn, ISBN 1-56718-449-9. History of the Ancient Aryans Iran is the ancient name of Persia, and it is derived from the root "Arya" or Aryan, the Indo-European branch of peoples who settled in that land. The Aryans of ancient Iran were Mazdayasni Zarathushtris, ie. Worshippers of Ahura Mazda (the name of God in Avestan) as revealed by the ancient prophet Zarathushtra, thousands of years before Christ. However, all the ancient Zoroastrian scriptures speak of an earlier homeland from where our people came, the lost "Airyane Vaejahi" or seedland of the Aryans.

Creating, cutting and printing your own woodblock Here's the basic process for buying tools, cutting a woodblock, inking and then printing with it. I've actually been trying to find a way into printing for a while, but don't have any access locally to equipment or classes. I finally came across Louise Woods' awesome book entitled " Practical Printmaking" and realized I should just get on with something, rather than waiting for the perfect opportunity to show itself. The Book of Shadows Here you will find one of the largest online Book of Shadows. This page may seem a bit unorganized but I can't think of any other way to do it and I would hate to have a bunch of links for you to have to click on to get to the information you are looking for. So check back often for more items. If you would like to have a spell or information posted here, e-mail me! If you see *UPDATED* next to a section, the new information is listed first.

Menrva Minerva Wisdom Goddess Arts Goddess Inventor Goddess Etruscan Goddess roman goddess pagan gods and goddesses Roman Gods and goddesses wiccan wicca paganism pagan Thalia Took Menrfa, or Menrva, is the Etruscan name of the Goddess of Wisdom and the Arts, who in Rome would be known as Minerva, and who corresponds to the Greek Athene. She is the Goddess of the mind, of crafts, artisans and trade guilds, and did not have a martial character until She was identified with Athene, who was brought to south-western Italy by Greek settlers. She was worshipped by workers and craftspeople, and was the patroness of the arts and learning, of engraving, weaving, painting, sculpture, dyeing, spinning, and teachers and students. Menrfa could be considered a Goddess of Healing as well. Her temple in Veii, the famous Portonaccio temple, contained three cella or chambers, implying a triad of Deities were worshipped there, probably Menrfa, Turan, and Artimi (Artemis) or Aplu (Apollo).

Word of the Day - spirituel The English adverb scilicet “namely, specifically, to wit” comes from Latin scīlicet, a contraction of the phrase scīre licet “it is permitted to know, one may be sure, of course, naturally.” The infinitive of the impersonal verb licet is licēre “to be allowed,” the source of licentia “freedom, freedom to do what one wants, lack of restraint, license” (as in English). The infinitive scīre “to know” was translated into Old English as (hit is tō) witanne “That is to know, to wit,” a gerund phrase from the verb witan “to know,” which became in Middle English it is to wite “it is to be noted,” and survives in current English as to wit.

The major world religions The information provided below is intended to provide a short introduction to the major world religions as defined classically. Each description has been kept very short so that it is easy to read straight through all of them and get a general impression of the diversity of spiritual paths humanity takes to live the kind of life God wants. As a result, a great many things have been omitted. No omissions are intentional and readers are encouraged to consult other resources on the web as well as books for more in-depth information. For an excellent introduction to Hinduism, Buddhism, Islam, Confucianism, Christianity, and Judaism, Huston Smith's "The World's Religions" is highly recommended.

People power transforms the web in next online revolution In July 2004, US cinema advertisements for Halo 2, the science fiction computer game, briefly carried the address for a website - ilovebees.com - which appeared to belong to a beekeeper who had mysteriously disappeared. Her honey-based recipes had been replaced by an apparently random list of numbers. Over four months 600,000 people joined in solving the mystery of what the numbers meant. What unfolded was a striking display of 'We Think': structured, mass collaborative creativity and intelligence. Lady of the Earth Here is my collection. I will be adding more files as time passes. Feel free to use what's here for your own personal use. You will not see a lot of advertising here as my site is dedicated to the Goddess and it is here for others who wish to learn Her sacred ways to do so without charge. If you would like to contribute an article, spell, story, etc. please feel free to contact me.

10 Lesser-Known Egyptian Gods That Are Absolutely Terrifying I was in Egypt a few weeks ago. Here's another relief from inside the temple at Esna, showing Thoth and Horus anointing the king, along with a goddess I believe to be Menhit. The interior of the temple is quite well preserved as it was deliberately buried to protect it. Here you can see the temple is significantly lower than the contemporary city. From this angle you can see the relief of Menhit pictured in the article. There was also a statue of Menhit in the courtyard outside.