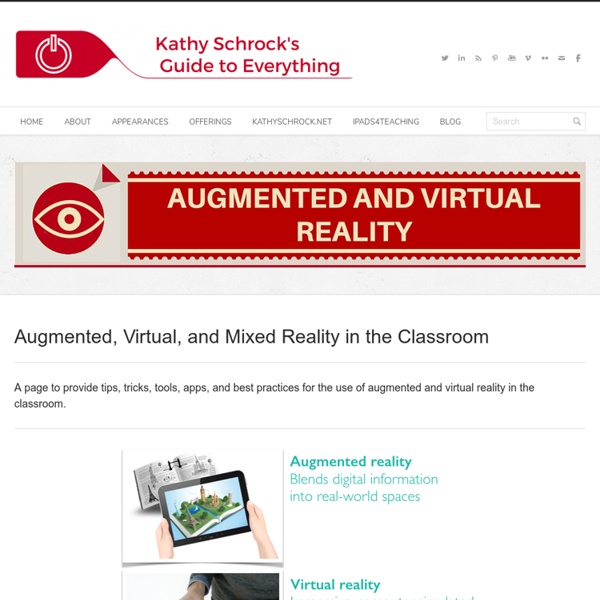 Virtual Reality vs. Augmented Reality - Augment News One of the biggest confusions in the world of augmented reality is the difference between augmented reality and virtual reality. Both are earning a lot of media attention and are promising tremendous growth. So what is the difference between virtual reality vs. augmented reality? The Promise of Virtual Reality in Higher Education Virtual reality teeters on the edge of becoming mainstream, with software development outstripping the hardware and memory storage needed. In this article, a librarian and an art historian discuss the many ways that VR may transform learning and student experiences. Not that long ago students and scholars could access only the libraries and museums available to them on their home campus — or perhaps in their city or region — because only a select few had the credentials to access materials from other institutions or the means to travel to distant places for their research.

Augmented Reality Brings New Dimensions to Learning Editor's Note: Drew Minock, who co-wrote this piece, is an elementary teacher, co-founder of the popular education blog Two Guys and Some IPads, and is one of the voices on "The Two Guys Show" podcast. Imagine living in the magical world of Harry Potter, where the school hallways are lined with paintings that are alive and interactive. Now imagine creating an atmosphere like that for your students.

DiscoVR Beyond Expeditions: Virtual Reality Creation in Libraries In her fantastic session at AASL 2017 in Phoenix, Arizona, Katie McNamara laid out how to utilize virtual reality as a tool for creation with our students. She shared tools and ideas and led participants through creating their own 360-degree images (with their phones!) that they could then manipulate. Katie generously shared her slides with links and images to projects her students have created. First off, why VR? Katie explained that VR can create shared experiences for our students. HTC Vive on Steam About This Hardware VIVE is a first-of-its-kind virtual reality platform developed by HTC and Valve for total immersion in virtual worlds. Using a headset and wireless controllers in each hand, you can now explore and interact with VR experiences, apps and games that blur the line between imagination and reality. Breathtaking visual experiences are provided by a headset that features a 110° field of view and 32 sensors for precise tracking for total immersion.

Augmented Reality in the Classroom READ MORE RECENT BLOG POSTS ABOUT AUGMENTED REALITY HERE!Since beginning the iPad journey in our school, I have been dying to use some of the Augmented Reality apps available on the iPad. I didn't want to dive in and use it with no substance I wanted to make sure there was real potential to enhance the learning in the classroom. For those people who are not familiar with the term "Augmented Reality," here is a web definition:

30 Immersive Storytelling platforms, apps, resources & tools The following list was compiled by an amazing group of storytellers from around the world. Last semester, while I was teaching Building Storyworlds: the art, craft & biz of storytelling in 21c at Columbia University, I reached out via a facebook post for immersive storytelling platform, app, resource and tool recommendations. Each semester my students design, prototype and present an immersive adaption of Sherlock Holmes. I shared some of the following list with the class in an effort to provide a sandbox for their experimentation. Since the semester ended, I’ve discovered a few additional resources that I’ve included below. Big thanks to everyone who contributed (see list at the end of the post). Introducing Wikitude SDK 8 - Wikitude The newest version of the Wikitude AR development platform is out! Equipped with the largest variety of augmented reality features on the market, Wikitude SDK 8.0 is the go-to tool for developers and businesses that wish to create endless AR possibilities and solutions. Wikitude SDK 8 introduces Scene Recognition, Instant Targets, Unity Live Preview, Windows Support, Extended Object Tracking and even more improvements in stability and performance. The final version of SDK 8 is now available for developers on the download page.

101 Ways to Use Tagxedo - Tagxedo Blog I'm glad to announce that the first version of "101 Ways to Use Tagxedo" is completed! --> <-- Please be patient as it does take a while to load the document (10MB, over 150 images). A few slides: Each way to use Tagxedo is accompanied by at least one example. 20 Ways to Use Augmented Reality in Education Second Life proved an incredibly valuable tool for educators hoping to reach a broad audience — or offering even more ways to learn for their own bands of students. Augmented Reality Development Lab: Affiliated with Google, Microsoft, and Logitech, the Augmented Reality Development Lab run by Digital Tech Frontier seeks to draw up projects that entertain as well as educate. The very core goal of the ARDL involves creating interactive, three-dimensional objects for studying purposes. Reliving the Revolution: Karen Schrier harnessed GPS and Pocket PCs to bring the Battle of Lexington to her students through the Reliving the Revolution game, an AR experiment exploring some of the mysteries still shrouding the event — like who shot first! Players assume different historical roles and walk through everything on a real-life map of the Massachusetts city. FETCH!

15 Games To Teach Kids About Social Issues - EasyBib Blog Incorporating games into the classroom is a great way to engage students and increase motivation. But how can social studies and history teachers use games to help students better understand social issues? Our guest contributor and expert on game-based learning, Dr. Matthew Farber, shares his favorite tools: Social impact games are a genre that seek to effect positive changes in society through play. The NEW Periodic Table of iOS Apps for AR and VR One of the most exciting arenas for innovation in education with technology is that of augmented reality and virtual reality. I’ve been a fan of exploring how these types of apps can be used to support and enhance learning for a long time now. One of my first books on iBooks was an exploration of how we can use AR in the classroom. Things have moved on a fair amount in the four years since I published it. Now with the right hardware (you’ll need something pretty pokey), you can buy a HTC Vive or an Oculus Rift and really get into virtual reality and do some great things.