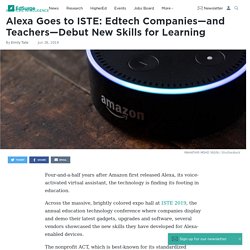 Across the massive, brightly colored expo hall at ISTE 2019, the annual education technology conference where companies display and demo their latest gadgets, upgrades and software, several vendors showcased the new skills they have developed for Alexa-enabled devices. The nonprofit ACT, which is best-known for its standardized college entrance test, privately demonstrated its new skill on an Amazon Echo Dot.

The ACT skill, which provides general information about the exam and can help students prepare for the test, will be available to the public this fall. Merge Cube Resources. Michael Fricano IIMERGE VR AmbassadorMichael is a member of the inaugural 2019 MERGE VR Ambassador Team. 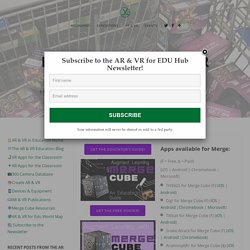 He has been researching the use of an presenting on the topic of AR & VR in the classroom since 2015. You'll find him actively helping educators learn the wonders of the #MergeCube and MERGE VR in the Merge Educator Facebook group and on Twitter! Ready for the Future of Education With Artificial Intelligence? - Next Gen Learning in Action. By Holly Morris, principal at Summit Strategies, an education innovation consultancy News Flash! 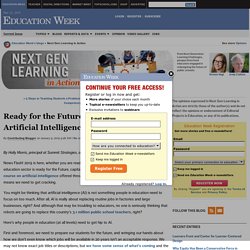 Amazon Now Lets Anyone Publish Alexa Skills. For example, a podcast host can create a skill so that listeners could simply say "Alexa, listen to Mike's podcast," and the latest episode would play on their Alexa speaker. 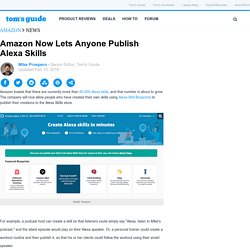 Or, a personal trainer could create a workout routine and then publish it, so that his or her clients could follow the workout using their smart speaker. MORE: Best Amazon Alexa Skills - Top Skills For Your Echo Speaker Currently, there are 50 skills blueprints available, which range from Dad jokes to chore charts to holiday greetings, and Amazon said that it's adding four additional Blueprints: Flash Briefing, so that you can create a custom news update; a Blog Blueprint for WordPress users will let bloggers deliver posts via audio; and University and Spiritual Talks blueprints can be used by universities and religious organizations to deliver audio content to listeners.

How one high-poverty district is adding virtual reality to its classrooms. Cornell School District eighth-grader Jada Jenkins stood in her conventional classroom and journeyed to another world. 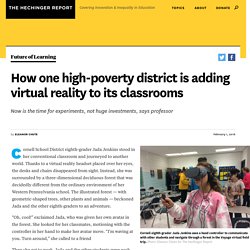 Thanks to a virtual reality headset placed over her eyes, the desks and chairs disappeared from sight. Instead, she was surrounded by a three-dimensional deciduous forest that was decidedly different from the ordinary environment of her Western Pennsylvania school. The illustrated forest — with geometric-shaped trees, other plants and animals — beckoned Jada and the other eighth-graders to an adventure. “Oh, cool!” Can VR be a tool for inspiring empathy in higher ed? Many educators are now discovering virtual reality can inspire empathy and strengthen compassion among students. 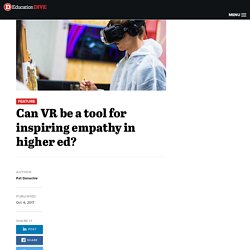 According to Richard L. Lamb, an associate professor and the director of the Neurocognition Science Laboratory at the University of Buffalo Graduate School of Education, the technology has a significant role to play in the development of students in both the K-12 and postsecondary space. Building compassion in students is the act of building experiences, said Lamb, and VR can certainly do this. Augmented reality. Amazon Pushes Echo Smart Speakers on Campus. In Amazon’s latest push into education, the tech giant is encouraging colleges to experiment with its Echo smart speakers and add the devices to their curricula. 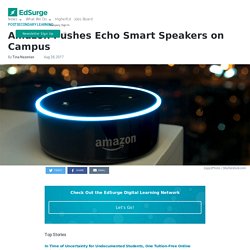 The company is working with Arizona State University, for instance, where it gave 1,600 Echo Dots to engineering students living in a new dorm called Tooker House. “ASU’s main motivation was to develop an opportunity for its engineering students to gain skills in voice technology, an emerging field,” says John German, an ASU spokesperson.

The engineering school at ASU has added "a little bit" of voice technology to the curriculum of three existing courses this semester, German said. However, the students who received the Echo Dots will "not at all" be required to take these courses. Artificial Intelligence In Education: Don't Ignore It, Harness It! How Virtual Reality is Changing Education #3dprinting #byod #coding #digcit. Why Virtual Reality has the Potential to Transform Education as We Know It – The Tech Edvocate. 20 Top Virtual Reality Apps that are Changing Education. *The Edvocate is pleased to produce its “Best of the Best” resource lists. 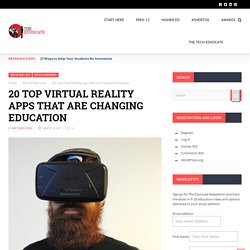 These lists provide our readers with rankings for education-related blogs, twitter accounts, influencers, products, etc. These lists are meant to be fluid, and for that reason, they are regularly updated to provide up to the moment information.* Virtual reality is one of the hottest edtech trends. Star Chart – with over 20 million users this app brings the universe a little closer. How virtual reality technology is changing the way students learn - The Tech Edvocate. CoSpaces Edu: VR for Schools. Will Virtual Reality Drive Deeper Learning? Though no hard numbers are available yet on how many K–12 classrooms are using virtual or augmented reality, new estimates suggest the technology could reach 15 million students by 2025. 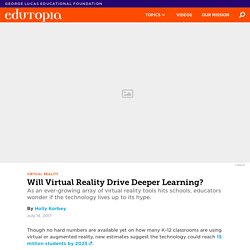 But without research to show the impact, experiences like landing on the moon or the sinking of the Titanic could be closer to entertainment than education, argue critics, who say much of what’s being marketed as virtual reality is not groundbreaking—or even new. Computer scientists first began experimenting with “virtual experiences” in the 1950s, and by the 1980s goggles and gloves had been developed to simulate immersion in a virtual world. “My question is always: How is virtual reality different from educational film?” Asks Audrey Watters, who speaks extensively on the role of technology in education and writes the blog Hack Education.

©Shutterstock.com/Piotr Adamowicz Because of its simple design, Google Cardboard can be used with most smartphones. 20 Top Virtual Reality Apps that are Changing Education – The Tech Edvocate. Virtual reality offers real rewards in education. In four Utica Community elementary schools in metro Detroit, students as young as 10 manipulate and pull apart the organs of the body, build roller coasters, and design and test 3D prototypes. 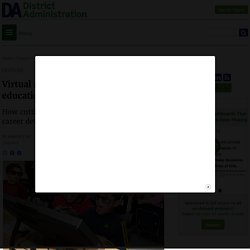 How Virtual Reality Could Change the Way Students Learn. Teachers Explain Why VR is More Than Just a Buzzword. 20 Top Virtual Reality Apps that are Changing Education – The Edvocate. 10 great virtual field trips to check out in 2017. Virtual field trips let you take students all over the world to unique experiences they wouldn’t get otherwise. Here are 10 to check out. (Public domain image via Pixabay.com) Cool Tool. ‘Mixed Reality’ technology from Microsoft is implemented by a special device – HoloLens glasses. They are a standalone, battery-powered device lasting up to five hours before requiring a recharge. The HoloLens allows students or teachers to add into real space three-dimensional objects (holograms) that fit the surroundings. Students and teachers can interact with holograms by gestures and voice.

The glasses also feature internal speakers near the ears. With huge potential for education, the idea is similar to that of AR and VR technologies, although advocates of the HoloLens claim it feels more natural and is possibly healthier, and describe how children stay in the same reality and don’t just visualize, but actually feel science. Like this: New York Times Virtual Reality in the Classroom. To save articles or get newsletters, alerts or recommendations – all free. Tech Tip: Bringing virtual reality to your classroom. One of the biggest trends to come out of ISTE 2016 was more viewers and services for virtual reality in education. Here's a look at some my takeaways from the show: Nearpod, a student engagement platform, has added a virtual reality component to its services. It is a paid service, though some schools and districts have received viewers as a bonus for purchasing the program. The service is available for all platforms, including PCs and mobile devices. Nearpod also offers lessons for teachers to purchase.

Make the most of virtual field trips to boost learning. Dive Brief: Virtual field trips have opened the world to schools without the time or money to let their students travel, and Discovery Education’s director of programming and production, Kyle Schutt, recently offered tips to eSchool News on how to make the most of them. Schutt writes teachers should prepare students by connecting the trips to content in the curriculum, and continue connecting them during the trip by pre-submitting questions to panelists or participating in any backchannel conversations on Twitter tied to the trip. Virtual Reality Classrooms Another Way Chinese Kids Gain an Edge. Deep within a building shaped like the Starship Enterprise, a little-known Chinese company is working on the future of education.

Vast banks of servers record children at work and play, tracking touchscreen swipes, shrugs and head swivels - amassing a database that will be used to build intimate profiles of millions of kids. How augmented reality enhances the classroom. Several years ago, I made one of those foolish Dad choices. Teachers Want to See More Virtual Reality in Their Classrooms. There’s plenty of excitement surrounding virtual reality’s applications in education. View.exacttarget. Greetings Tourism Industry Partners, Google said to be prepping new VR headset. Google has virtual reality ambitions that stretch beyond cardboard. The web giant is planning to release a new VR headset later this year, according to a report Sunday by the Financial Times.

Introducing Oculus Medium. Getting Started With VR: Which Headset Should You Get? Fantastic Contraption VR: The Best Educational Video Game Since Oregon Trail. Posted on Thursday, March 17 @ 09:55:00 PST by blake_peterson At the Oculus Rift launch preview event, but in a completely different world, I stood on a green platform floating in space, next to what appeared to be a spacesuit helmet, and a green-glass cat nearby with balloons sticking out of it and formed in the shape of a wooden beam and a broad wheel. Getting Real? Google Cardboard And Virtual Reality In Education. While we may not have flying cars, hover boards that really hover (and don’t catch fire), or teleporters just yet, the past year has seen the launch of at least one future-age technology we’ve awaited for decades: virtual reality. You’ve probably heard about Oculus Rift and other similar “prosumer” level devices, or professional-quality devices made for the average consumer that are rapidly making their way to production.

However, it seems that a much more primitive technology has eclipsed the mass market: simple pieces of cardboard. It’s Going to Be a Virtual Reality World at TED. The TED Conference has always had a reputation for being something of an alternate reality, but this year it is virtual worlds themselves that are taking the stage. 10 applications pour Google Cardboard. 9 Amazing Augmented Reality Apps for Teaching and Learning.

How Do You Tell a Story in Virtual Reality? Samsung and Facebook's Oculus sets launch for Gear VR headset in November for $99. Virtual Reality Is a Bubble — No, Not That Type of Bubble.