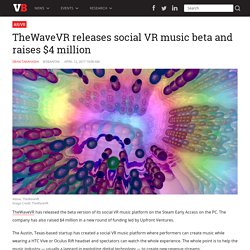 The company has also raised $4 million in a new round of funding led by Upfront Ventures. The Austin, Texas-based startup has created a social VR music platform where performers can create music while wearing a HTC Vive or Oculus Rift headset and spectators can watch the whole experience. The whole point is to help the music industry — usually a laggard in exploiting digital technology — to create new revenue streams. TheWaveVR is a VR platform for people who love music, enabling them to view, host and socialize in live and recorded shows worldwide, anytime, anywhere. TheWaveVR wants to enable musicians and artists to reach a much broader audience by creating a VR venue where artists can perform live music by simply importing their tracks, customizing the visuals of the venue, and sharing virtual shows.

Empathy is overrated. Michelle Kondrich Does empathy make the world a better place? 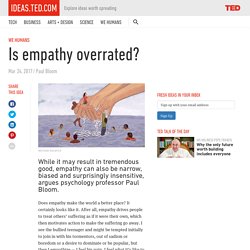 It certainly looks like it. Powerful Illusions: Addressing the Code of Ethics for VR. 360 Camera Analysis: How To Get The Best Bang For Your Buck. Create Your Own Interactive VR Characters With Limitless' Toolset. How Traditional Storytelling Is Ruining Virtual Reality Film - Motherboard. I spent much of the past two weeks with a screen strapped to my face, watching filmmakers' best stabs at telling a story in virtual reality. 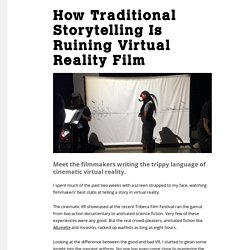 The cinematic VR showcased at the recent Tribeca Film Festival ran the gamut from live-action documentary to animated science fiction. Very few of these experiences were any good. How Traditional Storytelling Is Ruining Virtual Reality Film - Motherboard. Interaction vs. Immersion: The Challenges of Mobile VR. There is a difference between interaction and immersion. 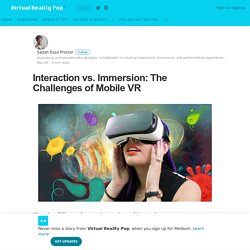 We take our smartphones everywhere. How to Design the Best UI for Room-Scale VR – Virtual Reality Pop. As virtual reality becomes more and more mainstream, we, the designers and developers, are starting to build in bullet-proof techniques and processes to make VR environments and experiences fun, believable, practical and seamless. 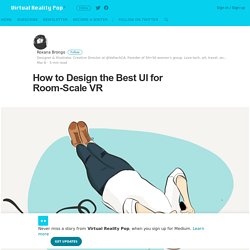 Here are some things I’ve learned about designing a user interface (UI) for room-scale VR interactive experiences. What types of UI elements are there in VR? Most of our notions of VR originate in cinema and gaming. There are small particularities in the building of a 360-degree environment, but I have found it’s always useful to start with something you know and then adapt for the new medium. There are 3 UI options* in VR that I have encountered: How to Shoot Virtual Reality: Seven Basics to Launch You Toward Virtual Virtuosity - MovieMaker Magazine. What works and what doesn’t on a virtual reality set? 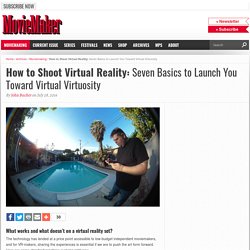 The technology has landed at a price point accessible to low-budget independent moviemakers, and for VR-makers, sharing the experiences is essential if we are to push the art form forward. Here are some standard practices evolving right now. 1. Acquire the Right Gear There are a variety of affordable VR camera options in the consumer and prosumer markets.